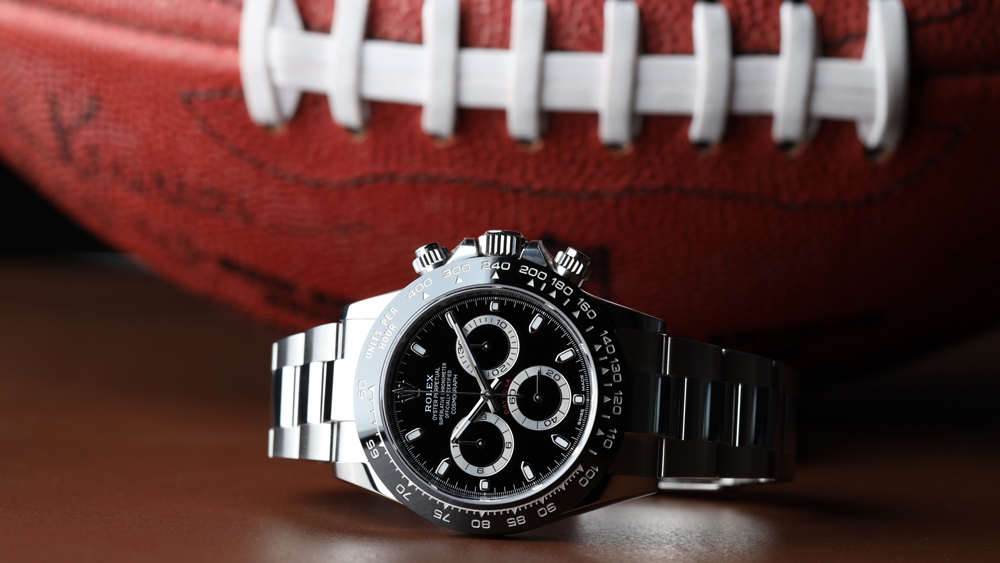 Are you ready for your chance at the touchdown of a lifetime? Fanatics.com is hosting a massive online charity auction for their All In Challenge, founded by the site’s executive chairman, Michael Rubin, who is also the owner of the Philadelphia 76ers. The proceeds will go to feed those in need including children, elderly and frontline workers. One of the highlights of the fundraiser is the opportunity to score a VIP weekend with Super Bowl champions, the Kansas City Chiefs, and take home a Rolex Daytona Ref. 116500LN-0002. Bidding started at $7,500 but it was already up to $21,000 at the time this article was published.

A steel Rolex Daytona Ref. 116500LN retails for $13,150, but good luck getting your hands on one. It’s among the most elusive models in the watch industry, so unless you are already a VIP (and more likely a VVIP) Rolex client, you won’t have the opportunity to buy it at that price. In the secondary market, the model retails for about $20,000, so at this auction’s current top bid, you are already getting the watch at its current value—plus the insane added bonus of spending one-on-one time with the Chiefs.

Mitchell Schwartz of the Kansas City Chiefs  Courtesy of WatchBox

In addition to sporting the most coveted Rolex in the game, the experience kicks off with first-class seats on a flight to Kansas City, Missouri where you will be spending the weekend at Arrowhead Stadium to hang out with the football champions on their home turf. All-right pro-tackle, Mitchell Schwartz, is leading the initiative. “It includes two tickets to the game, hanging out with some of the WatchBox guys who will be there, then watching the game, and getting to come on the field after to be able to see Arrowhead from ground level and take pics,” Schwartz told Robb Report. “It’s possible to meet my teammates after the game but with the format of game day there is no guarantee there. But they’ll get all the perks and game day experience that a family member would. And then from there heading to my place for dinner. Might also be some other fun things sprinkled in but those will be surprise additions.”

When he’s not in his cleats, the sports star is an avid food blogger, so after spending time with the guys on the field, he’ll be whipping up an all-star meal in his home. “I was thinking homemade pizza, smashed burgers, and/or steak,” says Schwartz. “Homemade pizza is my favorite thing to cook and it’s perfect when hosting because you can customize the pizza based on what the guests like. It’s also easy to make the dough ahead of time (my typical dough recipe does a 72-96 hour fermentation) and they cook up in about 4 minutes in the oven. Smashed burgers as well, those take less than 2 minutes to cook. And steak is usually a crowd pleaser.”

Schwartz is also an avid watch enthusiast. (His current personal favorite is the A. Lange & Söhne Zeitwerk Striking Time in white gold with a black dial.) The NFL footballer teamed up with Philadelphia-based pre-owned dealer, WatchBox, to offer the top bidder the 2019 Rolex Daytona, which has never been worn. How’s that for dessert?

Other major experiences being offered in the All In Challenge include a private putting lesson with Tiger Woods (current top bid $160,000), an opportunity to attend the Thor: Love and Thunder premiere and meet its star Chris Hemsworth (current top bid $21,000), or a Napa Valley weekend for eight hosted by famed chef Thomas Keller (current top bid $70,000). One of the most expensive lots is Robert Kraft’s Super Bowl LI ring championship ring with a current top bid of $1,025,000.

But you can expect more watch opportunities to come: WatchBox founder Danny Govberg says he is nominating Georges Kern, CEO of Breitling and François-Henry Bennahmias, CEO of Audemars Piguet to go “all in” on the challenge next.

The All In Challenge started on April 14th and has already raised a whopping $43,891,157. New items will be added daily, with varying end dates for each auction and sweepstakes, until, according to the site, “we reach our goal of tens of millions of dollars for Covid-19 relief efforts.” It looks like they’ve crossed the end zone multiple times over, but fortunately, the game isn’t finished yet.