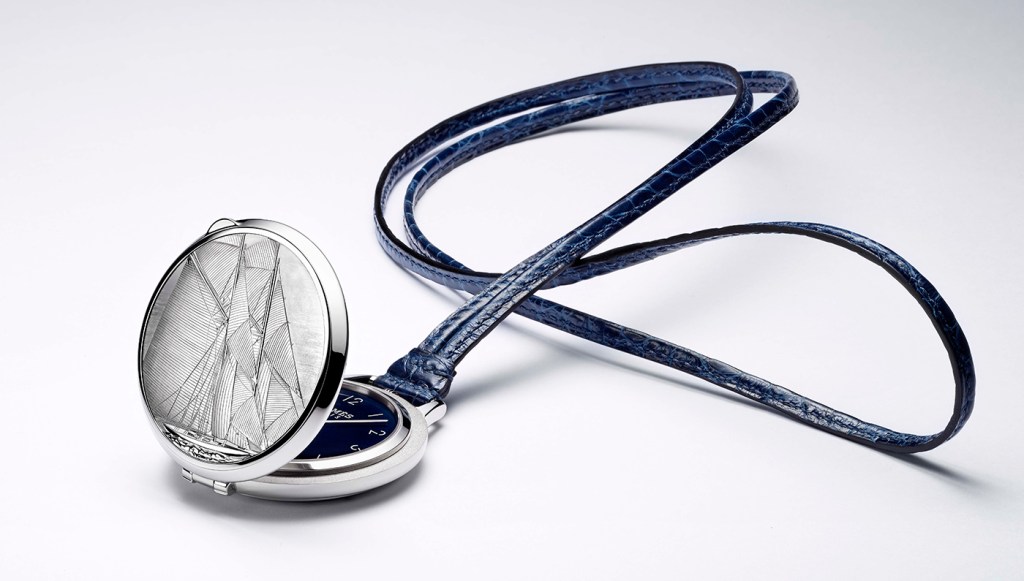 French luxury goods manufacturer Hermès is celebrating its watchmaking artisanship with Crafting Time, an exhibition at its Madison Avenue store on display through November 5. The centerpiece of the exhibition is the Slim d’Hermès Pocket Vieux Gréement, a new enamel pocket watch that combines a deep-blue Grand Feu enamel dial with a painstakingly detailed engraving of a ship setting sail on its white-gold case. From the fine lines of its sails to the reflective cuts that make up the ocean below, every line and detail on this unique piece was hand engraved by Hermès master craftsman Sylvain Bettex. “The entire process took roughly 50 hours from start to finish,” says Bettex, who was illustrating his craft at a makeshift workbench for the exhibition.

Beyond its beautiful casework, the one-of-a-kind timepiece ($183,400) houses the same H1950 movement that powers the 3-hand dress watches in the Slim d’Hermès collection. Visible via its sapphire display caseback, the 2.6-mm-thick microrotor-equipped automatic caliber boasts hand-chamfered bridges, as well as a healthy dose of h-patterned etching that adds to its unique appeal.

Though not a core component of its watchmaking repertoire, pocket watches are part of the Hermès DNA. In 1912, Jaqueline Hermès was gifted a porte-oignon by her father to enable her to strap her pocket watch onto her wrist while out riding horses, and since then the brand has released a handful of limited-edition pocket watches—each using traditional techniques such as marquetry and cloissoné enamel work. (hermes.com)