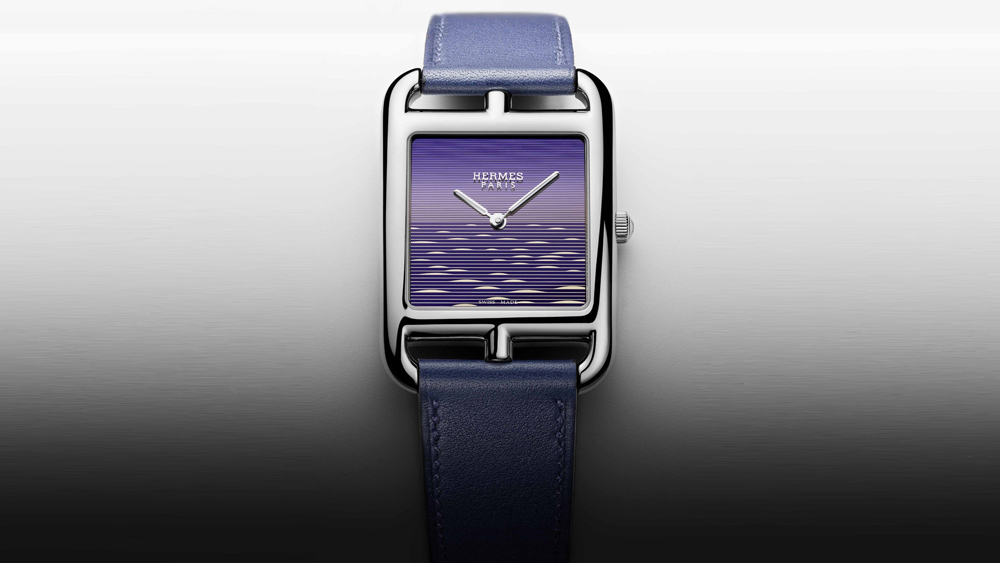 Hermès is known for creating exquisite watch dials with designs often lifted from its iconic scarves. Case in point:  this exquisite marquetry example used 195 pieces of wood to recreate a design by British artist Alice Shirley that originally appeared on the company’s vaunted neckwear. In another case, a colorful toucan dial was created using 500 silk threads.

But this time around, for its Cape Cod model, the French house found creative inspiration from an unusual source—a type of silicon wafer used in microelectronic semiconductors.

The graphic dial on the new Crépuscule Cape Cod ($7,270), which will be available this summer, was actually created from a single 0.5 mm-thick plate coated with a minute film of silicon nitride measuring just 72 nanometers to achieve an intense blue color. It was then exposed to blue light via a photolithography process to create the motif designed by artist Thanh-Phong Le, which is meant to depict the sun’s golden rays hitting the blue water at sunset. Finally, the plate was dipped in several baths to remove any extra material before it was coated in gold and cut to fit within its 29 mm case.

The process was developed in partnership with the Neuchâtel-based Swiss Center for Electronics and Microtechnology. The organization’s engineers discovered a way to control the amount of material deposited during production to create different hues in the wafers for subtle shades to create a serene wave-like pattern.

The result is a surprisingly beautiful piece of art derived from a very unlikely source. Bravo to Hermès for stepping outside of the box for a truly original piece.