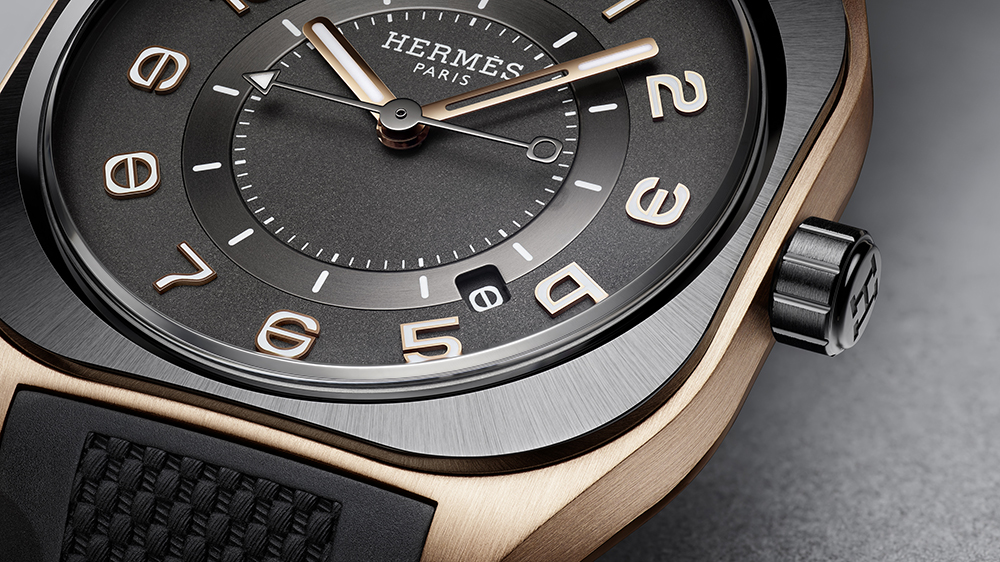 Hermès just further proved the sporty H08 can be sophisticated, too.

First unveiled at Watches & Wonders in 2021, the automatic timepiece has always sat at the intersection of sport and dress styles. It has also been made available in several colorways, from black to gray to blue, since its debut. The latest version, however, might be the most dapper of all.

Flip the watch over, the caseback is made of black DLC-treated titanium and has a rose-gold center, naturally. The strap is available in either black rubber or anthracite fabric to give collectors a little more versatility.

The beating heart is still the house’s H1837 self-winding movement. Made in Switzerland, this caliber is equipped with twin spring barrels that provide a 50-hour power reserve. Fun fact: the H1837 was first used in the Hermès’ Dressage Collection that was conceived by designer Henri d’Origny in 2003.

Of course, all that watch doesn’t come cheap; the new H08 will set you back $15,500. Orders will open this spring, with delivery expected later in the year.

Hermès’ newcomer follows a slew of notable releases at LVMH Watch Week. From Hublot to Bulgari, the biggest luxury watchmakers unveiled new designs with colorful cases, diamond-set dials and more. The countdown is also on for Watches & Wonder Geneva 2023. The famous tradeshow, which will be held at the Palexpo convention center in from March 27 to April 2, will bring together nearly 50 top brands and will open to enthusiasts. Tickets will be available for about $70 via the Watches and Wonders website from early February. See you there.