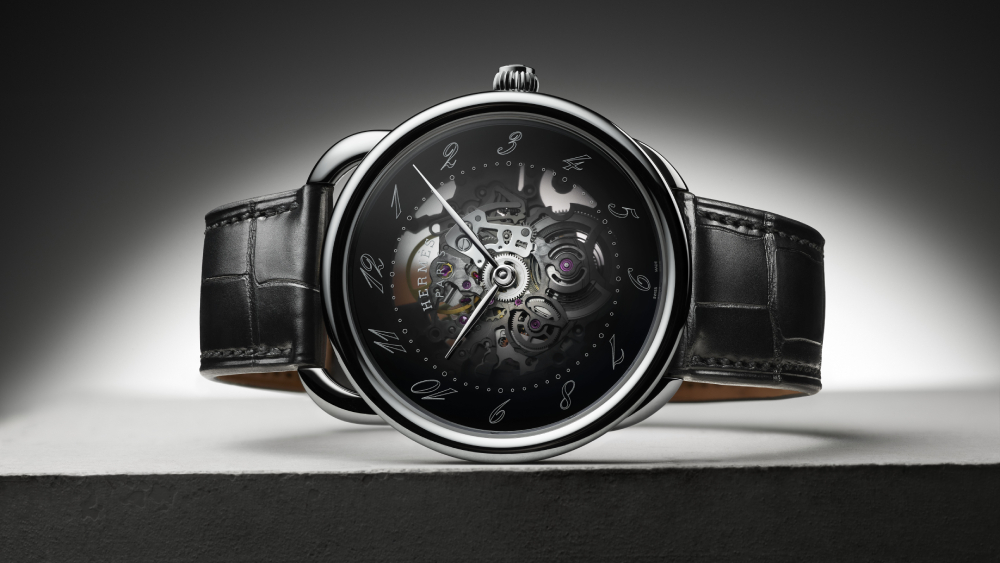 Hermès may be best known for its leather goods, but the French heritage brand applies its unimpeachable quality standards to everything it creates, including its latest watch.

The company’s Henri d’Origny-designed Arceau timepiece, a true modern classic, was created in 1978. The newly launched Arceau Squelette gives the design a contemporary reworking. It has a round, polished 40mm stainless steel case with stirrup-shaped lugs––a nod to Hermès’ equestrian heritage––that acts as a frame for its most striking elements.

The smoked sapphire crystal dial has a gradient effect that grows more transparent toward the center to reveal a skeletonized, self-winding mechanical movement. The perimeter is inscribed with contrasting silvered Arabic numerals and beaded minute markers. All of the bridges, anthracite wheels and oscillating weight of the Swiss-made watch play with the sense of lightness lent by the slender hands.

It has a healthy 42 hours of power reserve and is water-resistant up to 30 meters. And this being a product of Hermès, the strap is nothing to sneeze at. Offered in a range of muted colors versatile enough to pair with most looks, each one is made from top-grade alligator that secures with a folding buckle.

It should come as no surprise when considering its maker that this watch is all about the details. Hermès has a long tradition of elevating normal objects and, according to a company press release, it has come to view time itself as an object that can be given its Parisian touch.

The Hermès Arceau Squelette will soon be available on the Hermès website and in boutiques where it will retail for $8,600.