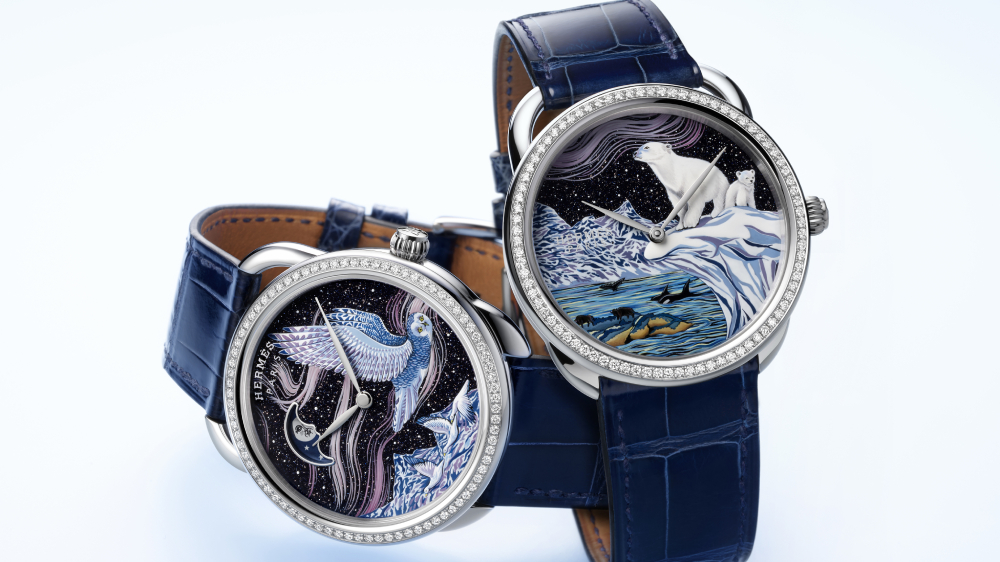 You don’t survive for 183 years without knowing a thing or two about reinvention and Hermès has that skill––among countless others––mastered. A recent example is a nature-inspired update to one of its most vaunted timepieces.

The Arceau watch was designed by Henri d’Origny in 1978 and has been a mainstay of the house ever since. Its classic round case silhouette and signature curvature have acted as a canvas for many iterations over the decades, but two new limited-editions (numbering just 24 pieces each) are taking their aesthetic cues from Canada’s majestic wilderness.

This new version, dubbed the Arceau Into the Canadian Wild, features a polar bear and snowy owl, respectively, with designs stemming from the Into the Canadian Wild silk scarf of 2017, a style created by British artist Alice Shirley commemorating Canada’s 150th anniversary. And the horologer’s selection of fauna is no accident: the owl is emblematic of Quebec while the polar bear and cub demonstrate the variety of terrain and wildlife in the region.

Each stunning dial is painstakingly hand-painted.  Courtesy of Hermès

The Parisian label’s highly skilled artisans spent more than a week painstakingly tracing the contours of the motif on each dial to create depth and texture. Once that stage was complete, the aventurine base was fired in a kiln to set, after which the animals and landscapes depicted were created by strategically layering paint with another firing between each layer. Together, these techniques create a multidimensional background despite its miniature scale, something highlighted by the 82 diamonds wrapping around the 23.9 mm white gold case.

But these two styles boast more than just good looks. Powered by the Swiss-made Hermès H1912 self-winding mechanical movement, they also have a 50-hour power reserve and are water-resistant up to 3 meters.

The dial may have experienced a revamp but Hermès didn’t neglect the features that have helped make the Arceau a classic. It retains its equestrian-inspired, stirrup-shaped lugs and handsome blue alligator strap. Find it in-store come September. Price upon request.