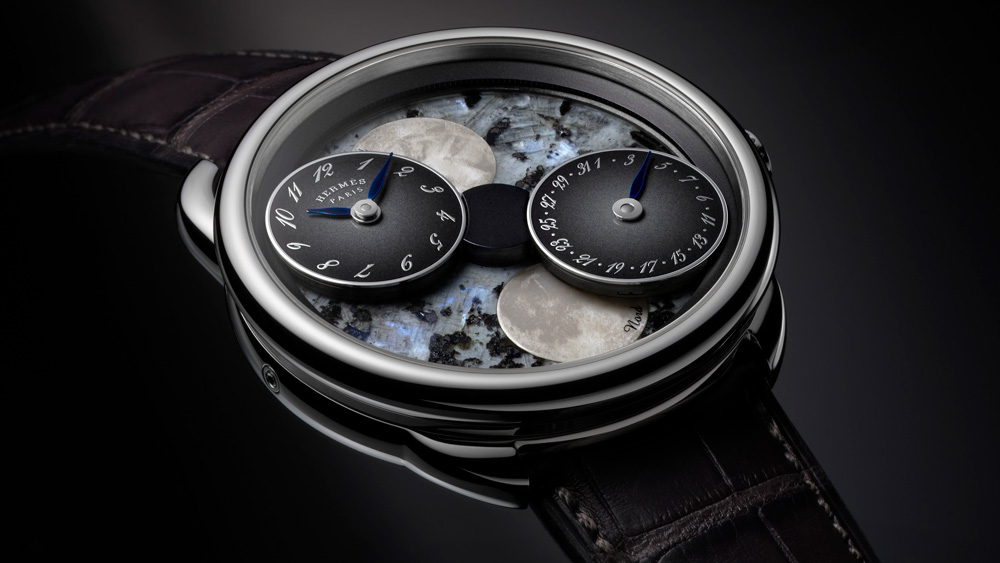 Hermès covers all the bases with four new introductions this week, including a new GMT movement, an unusual ladies’ model with a hammered case, and an out-of-this-world take on the award-winning L’heure de la Lune.

The Slim d’Hermès GMT ($19,675, available in September) stands out as an aesthetically unique interpretation of the GMT function. The slim, already barely-there font, which is proprietary to Hermès and was created for the Slim model, is further obscured by a layer of smoked glass over the hour ring. In a second instance of semi-obscurity, the numerals on the GMT second time zone subdial are arranged seemingly randomly rather than peripherally on an outer ring. Fortunately, each of the hands magically lines up with each numeral, leaving no question as to the time. The H and L refer to local and home times, showing light or dark for night and day indication in a dot underneath each. The watch contains the ultra-slim Hermès-made movement H-1950 with a new GMT module. The 18-karat red gold or palladium case is 39.5 mm wide and 9.48 mm thick and comes on a matte abyss-blue alligator. It is priced at $19,675 in gold and $14,775 in palladium.

Another highlight are the new versions of Hermès’ exceptional moon phase model. Arceau L’heure de la Lune was a hit when it launched at the SIHH last year in Geneva, and went on to take the Calendar and Astronomy Watch price in the 2019 Grand Prix d’Horlogerie de Genève. The unique double mother-of-pearl moon phases (for northern and southern hemispheres) are now displayed against a background of exotic meteorite. The star is a Martian meteorite dial (limited to two, price upon request) that is slightly green in color, which on the one hand is surprising, since Mars is always depicted as red because of its iron-oxide rich surface. The subdials for time and date on this one are white lacquer.

The moon phase at 12 o’clock, as seen from the southern hemisphere, is adorned with a Pegasus, the winged horse that, according to Hermès, “hints at the passage between two worlds, where magic and reality merge.” The moon at 6 o’clock showing the view from the northern hemisphere is printed to resemble a moon surface.

The movement is the Hermès Manufacture H1837 with a proprietary moon phase module housed inside an 18-karat white gold or platinum case.

Hermès took to the jeweler’s bench to highlight the distinctive square-within-a-rectangle case of the new quartz Cape Cod model. The Cape Cod Martlée (French for a hammer-like tool) has a stainless steel case that has hammered design to create interesting light and shadows and give it a unique patinated look. The dial is also hammered and then coated with a layer of translucent lacquer in graded shades ranging from anthracite to black. Each piece has its own unique look. Even the chaîne d’ancre (anchor chain) half-links that attach the strap to the case are hammered. The watch comes with a Barenia calfskin strap that can be either single ($3,625) or double wrap ($3,775).

The Cheval Cosmique is a mètiers piece celebrating the brand’s signature horse motif, a reference to the company’s roots as a saddler for the carriage trade in 19th century Paris. The engraving on the dial, based on a design created by artist Gianpaolo Pagni, represents the silhouette of a horse from a work of art in the private collection of Emile Hermès, grandson of the company’s founder. Each depiction of the horse takes a week to engrave.

The dials are either aventurine or mother-of-pearl and enamel with a diamond bezel. Each is a limited edition of 24 pieces. The movement is the automatic H1912. Prices on request.