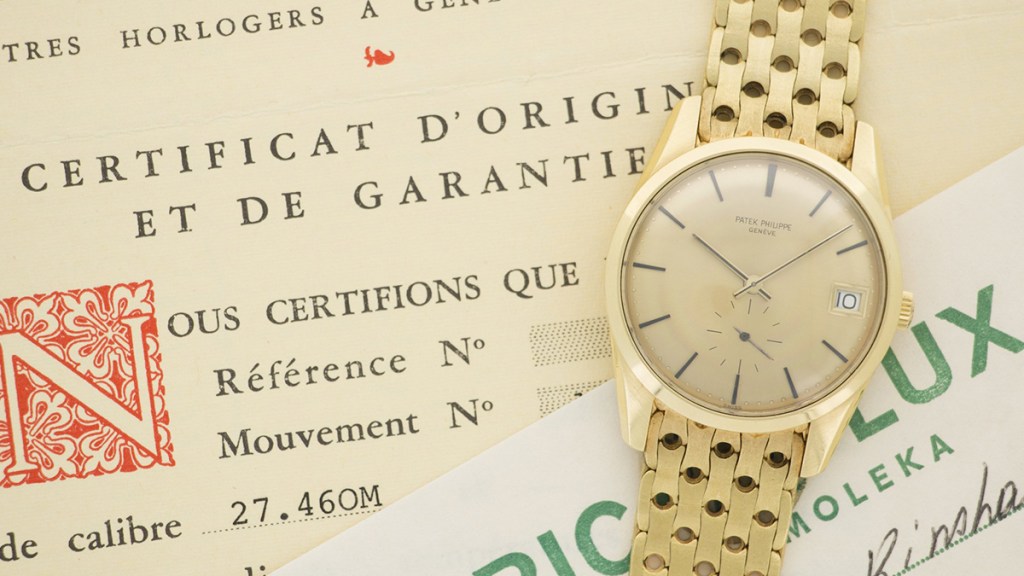 After a much-needed break from the hectic spring/summer watch auction season, our Vintage Finds series returns, bringing with it another trio of rare vintage timepieces. This week brings us a pair of interesting chronographs—one a rare take on the classic Heuer Monaco, and the other a modern-sized triple-calendar chronograph from Ulysse Nardin—alongside a Patek Philippe of unusual provenance.

As expected, the vintage watch market is still going strong. Earlier this year Jackie O’s Cartier Tank shattered initial estimates by fetching $379,500 in New York.  The spring watch auctions in Geneva from both Phillips and Christie’s fared equally well, yielding impressive results from both big name and more obscure vintage pieces of respectable quality. As we began building our list for this week we found no shortage of inventory online, and you can expect to see more exceptional vintage watches in the weeks to come.

Arguably the rarest variant of the Heuer Monaco in existence, the appropriately nicknamed Dark Lord was first unveiled in 1975 and never fully launched as a production model. These black PVD Monacos seldom come up for sale, and those that do often fetch a healthy premium over other variants. This particular example is being offered via Atlanta-based Crown & Caliber (whom we featured a number of months back) at a price of $48,000.

A Patek Philippe Calatrava 3558 isn’t particularly common in the vintage watch market to start with. Finding one with its original bracelet—and in such well-preserved condition—adds further challenges, as one would expect. What makes this so more interesting is the fact that this example, being sold by The Keystone in Beverly Hills for $35,000, was originally sold out of Zaire—the then much less Democratic Republic of the Congo—in 1974. The piece is being sold with its original box, the bill of sale, as well as an archival extract from Patek Philippe.

Though light on details in its listing via Le Collection’Heure in Belgium, this Ulysse Nardin is a classic and clean example of the steel chronographs that continue to gain traction in the vintage market. Given its age, 38mm case size, and its 2-register chronograph and calendar configuration we can safely assume that there’s a Valjoux 23C ticking away underneath its caseback, though we’d certainly be asking for imagery of the movement before offering anything near its 11,500 Euro asking price.