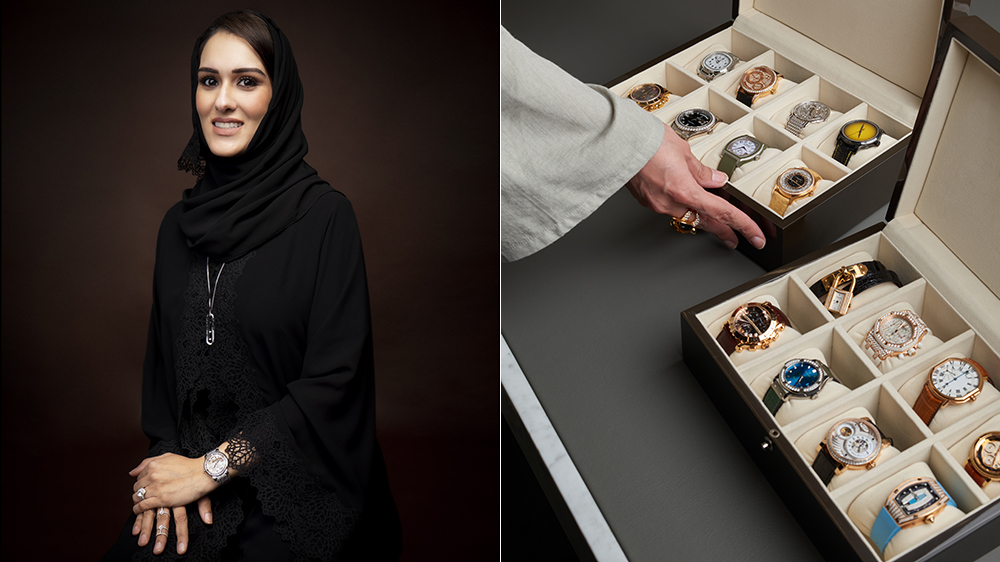 When you grow up surrounded by watches, in a family that figures prominently in the business, you can expect your personal collection to come under some scrutiny. Last fall, during the fifth Dubai Watch Week, reporters gathered not just to glimpse the limited editions unveiled by the brands, but to check out the wrist of the tastemaker behind the show, Hind Seddiqi.

What does a person with both means and opportunity wear when she has access to the best of the best? Her collection, like the woman herself, has a quiet but commanding presence. Her pieces are as erudite and collectible as you might expect, but for her, they carry an emotional value that goes beyond their market value. Some were gifts from family members that she holds dear. Others marked milestones in her life—graduating from university and the birth of her first son. All were chosen with the keen eye of a true aficionado.

Seddiqi is the granddaughter of the founder of Ahmed Seddiqi and Sons, the largest watch retailer in the UAE, with 51 locations and counting. She serves as chief marketing and communications officer of the company and is also the director-general of Dubai Watch Week, the watch trade show and forum the family has hosted since 2015. “There are so many great watches out there,” she says. “I’m lucky to be around them. It’s a dangerous business to work in.”

What was your first important watch?
The [Rolex] Daytona—in yellow gold, with a black mother-of-pearl dial. I bought it in 2005 when I graduated from university. I remember taking it to our service center to have some links taken out and our technician was very worried about the amount of gold I was removing. He was asking me why I was buying a men’s watch, anyway. I said, ‘Don’t worry about it, I love it.’ The Daytona is one of those men’s watches that women really love and wear a lot.

Can you have any watches you would like?
When I first joined the company, whenever a new shipment came in we would all go down and look at the watches and often pick out what we wanted to buy. That was back in 2006. Today it’s becoming much more difficult because they are so limited. I’d like to have a newer Daytona, but I’m on the waitlist believe it or not. We have a system, and clients come first. It’s difficult.

Which one do you wear the most?
A white gold Rolex Day-Date that is now discontinued. The dial is black but the reflection of the big diamonds on the bezel makes it look a beautiful dark gray. It’s a timeless, classic men’s watch. I have a lot of men’s, and it’s a good thing because I have three boys who will inherit my collection—they will be very happy. I’ve always been drawn to men’s watches. I think I’m influenced by what I see my father (Abdul Hamied Seddiqi, chairman of Seddiqi Holding) wears. Also, the movements and the mechanics in men’s watches are more interesting.

What is your favorite?
The Patek Philippe ladies’ World Time. This was a dream watch, and I don’t think I could get it today, with the situation in the market. I remember saying to my uncle (Abdulmagied Seddiqi, co-founder of Seddiqi Holding) if you get a chance, would it be possible to allocate one of those for me? He said, ‘Okay, we’ll see.’ I didn’t expect to get it, so when he called and said they approved it, I was over the moon. I will never forget this. It’s a beautiful watch.

Do you have any other women’s watches?
I tend to gravitate towards men’s, but I love women’s pieces as well. I don’t know if we can call this a watch [she holds up a Van Cleef & Arpels Alhambra pendant watch] but it’s cute and I love it. I can wear it as a necklace and that frees up my wrist to wear another watch.

Which watch has the most sentimental value for you?
A Moser Endeavour Centre Seconds with a bright yellow dial given to me during Dubai Watch Week 2017 by my cousin (Mohammed Abdulmagied Seddiqi, chief commercial officer of Seddiqi Holding), and he has one too. It’s one of only two pieces. Moser made them especially for us because we both love yellow. It brings back warm memories of that year during DWW, so it’s quite special to me.

What is your grail watch?
My ultimate want-to-have watch is a ladies’ minute repeater from Patek. I love the ones with miniature paintings. But let’s see when and how. I’m saving for it. My cousin says, ‘Hey, you skipped the tourbillon,’ but I don’t want a tourbillon, I just want a repeater. Some collectors think you should acquire complications in stages, but there’s no order. I think you should just go for what you want when you have the chance.

If you could design the perfect ladies’ watch, what would it look like?
It would have to be very comfortable on the wrist. I would design something lightweight and easy to wear every day. The finishing would have to be spectacular, even if it’s just on the back of the movement. The straps would have to be easily interchangeable, because I love to change the colors, especially on a classic case. As you can see, I buy more watches with straps than with bracelets. For size, I’d say around 40 mm. Other women opt for smaller sizes, but for me, 40 is ideal. Also, I love hardstone dials, like the malachite one MB&F just put on the FlyingT.

What’s it like working with mostly men in a male-dominated business?
When I joined the company, we had very few women in the corporate office. I remember sitting in many meetings and being the only woman, but that is starting to change—for us and in the region in general. I was lucky because I had great support from my male cousins who I work with, and my father, and my uncles. They empowered me. I never felt out of place or that I shouldn’t be there. I actually felt like they needed a woman’s perspective on things, and they appreciated it, they encouraged it. I know there are women who have been in far less pleasant situations than mine, but I think it’s changing, and we’re starting to scare men—like, ‘Oh my God, another woman CEO’—there are men who still think this way. But you know, the impact of women in the industry is showing. You can see it in the way we talk about watches and write about watches, and the women who come after us will have an easier time.

What about the industry’s approach to ladies’ watches?
We didn’t use to see women’s watches in the launches, but that’s changing. Now, they’re always thinking about women. They’re asking women what they want, and they know women have very strong purchasing power as well, which they cannot ignore. I also think women today do not fear wearing what is labeled as a men’s watch—in fact, we should do away with that term and just go by size. Maybe we can also encourage men to wear petite diamond watches. You never know.