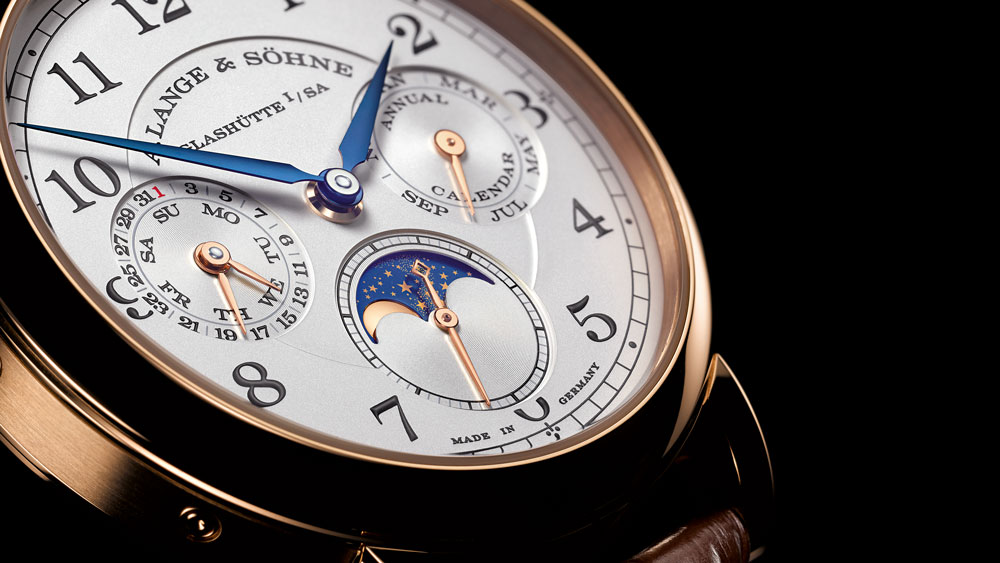 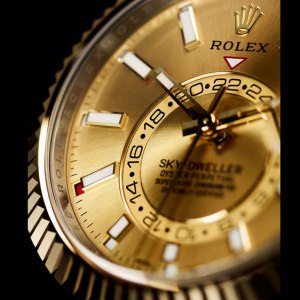 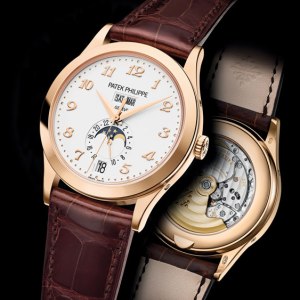 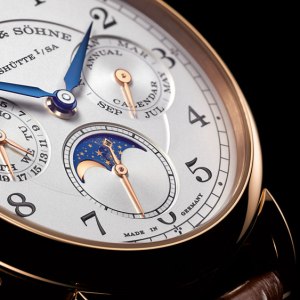 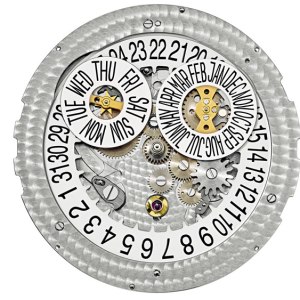 Of all the extra functions that can be added to a basic wristwatch, the annual calendar may be the rarest species among them—a mechanism that was conceived in the modern era and has grown in popularity to rival the traditional complications from the Enlightenment. Patek Philippe’s 1996 release of its reference 5035 was the first example of a calendar watch that required adjustment just once a year. With its complexity of display and function, the watch had much of the appeal of a traditional perpetual calendar but was less onerous to set—and a lot less expensive.

Of all the extra functions that can be added to a basic wristwatch, the annual calendar may be the rarest species among them—a mechanism that was conceived in the modern era and has grown in popularity to rival the traditional complications from the Enlightenment. Patek Philippe’s 1996 release of its reference 5035 was the first example of a calendar watch that required adjustment just once a year. With its complexity of display and function, the watch had much of the appeal of a traditional perpetual calendar but was less onerous to set—and a lot less expensive.

“The idea was really the graduate project of an engineer from the University in Lausanne,” says Laurent Junod, director of technical training for Patek Philippe in New York. “He received a prize for that project. Patek Philippe was very interested and he went to work for the company right away.” Among the chief elements that undoubtedly caught the company’s eye was the construction. Unlike typical perpetual calendars that function via the subtle interplay of a complex cam and a large lever, the new annual calendar was based almost entirely on stacks of gear wheels, and a few more complex cams. While the construction actually employs a larger number of parts than one of the company’s perpetual calendars, the wheels are easier to produce and assemble.

“You have to put them together following a certain procedure,” explains Junod. “The wheels have to be correctly aligned. When this watch came out in 1996 it was a little revolution in the watchmaking industry because it was made in a completely different way.” The annual calendar, with its compelling combination of complexity and value, also proved to be quite popular. Today the mechanism appears in more than two dozen different references with a variety of display formats thanks to the compactness and versatility of the complication.

Unfortunately for Patek Philippe, its monopoly on the annual calendar complication was not to last for the full 25-year term granted to Swiss patented intellectual property. Because their patent was highly specific regarding the structure of the mechanism, a window was left open for other companies to engineer their way around the protections, taking new paths to the function and occasionally creating interesting features in the process.

Such was the case with A. Lange & Söhne’s Saxonia Annual Calendar, which arrived on the market in 2010. Most apparent is the outsize date that Lange employs with all its calendar functions. The mechanism inside, however, is the real differentiator.

“It’s a lever design,” says A. Lange & Söhne director of product development Anthony de Haas. “There’s one special wheel that is quite different from the classical 48-month wheel [on a perpetual]. It’s a lever engaging into that wheel that decides how long the wait will be. The challenge is that at the end of a month of 30 days, the date needs to make two jumps from 30 to 1.”
De Haas followed up the Saxonia this year with a manual-wind model in the company’s 1815 family. The calendar has been updated with a quick-set pusher to advance the date in case the watch winds down.

Lange’s offering was followed by a veritable torrent of annual calendar watches in succeeding years. In 2011 Vacheron Constantin released a model with a retrograde date display. Blancpain’s Villeret Annual Calendar GMT was unveiled the same year. Interestingly, the date on Blancpain’s model was directly tied to the GMT function, allowing the wearer to toggle forward and backward for quick setting, while correctors under the lugs advance the month and day of the week.

One of the standouts among more recent entries is the Rolex Sky-Dweller, with a minimalist display that perfectly embodies the brand’s famous functionalism. It says a great deal about the practicality of the annual calendar that Rolex would select it for its most complicated watch of the modern era. The month indication on the Sky-Dweller is shown via a window above each hour index which, when red, designates the month of the year. A Ring Command bezel allows the ease of setting the different functions without affecting the classic design.

Designers have translated the various mechanisms into latter-day interpretations of the classic triple date display or into more expressive jumping hands—proof of the complication’s versatility. And unlike many of the classic complications that dominate the timepieces on which they are mounted, the beauty of the annual calendar is that it seems to gently sublimate itself to the time display, making for a naturally balanced watch. It is not a bad signature for one of the genuine horological products of our era.