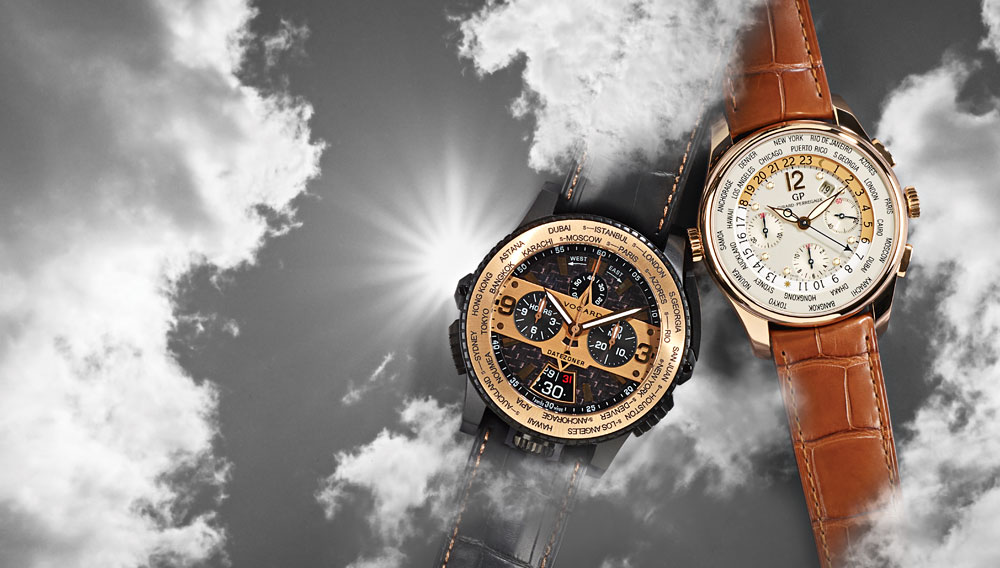 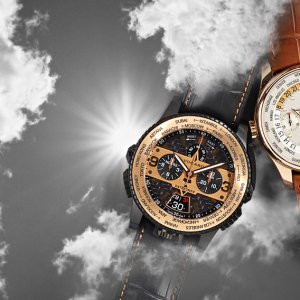 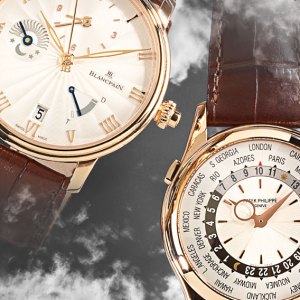 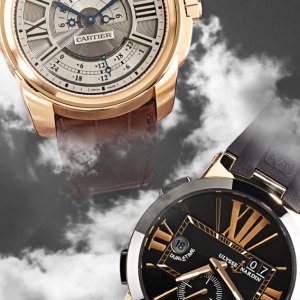 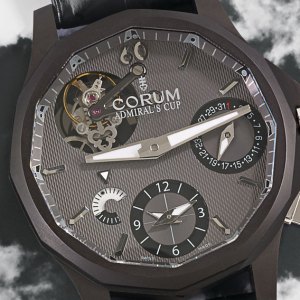 It has been said that you do not need a wristwatch in the modern age—unless you need to know what time it is somewhere else. Our present society’s need for continual intercontinental travel—one of the many burdens of globalization—sets us apart from previous generations in that we seldom have the luxury of focusing solely on our own place and time zone. When we are not traveling, we still must be mindful of when business closes in Europe and Asia; and when we are abroad, we frequently check our watches to see whether our spouses are awake or the markets have opened at home.

Like their contemporary wearers, watches made for the express purpose of registering a second time zone differ from their forebears. Most traditional complications still familiar to us today were actually developed long ago, when life moved at the pace of a horse-drawn carriage; yet the travel watch is purely a product of the 20th century. Absent the long heritage associated with, say, a minute repeater, designers of these timepieces have gone about their task unencumbered by preconceptions. Consequently, travel watches vary from one model to the next more than any other genre of timepieces.

The most basic type of travel watch is the GMT. Meant to track Greenwich Mean Time for navigation and communication purposes, the GMT function can be set for any location. The single hand tracks along a 24-hour scale located on the surface or inner edge of the bezel (the latter design is more common). The configuration is relatively simple but not intuitive, because the 24-hour scale does not align with the 12-hour scale on which time is normally read.

Designers have addressed this problem with myriad solutions. Subsidiary dials, multiple hour hands, and digital displays all make reading the second time zone considerably easier, especially when the watch includes a day/night indicator. Such a feature is a convenience for travelers that should be mandated by loved ones back home who receive phone calls from distant destinations.

By far the most complex and evocative travel watches are the so-called world timers, which register the time in a selection of cities listed on the bezel. Louis Cottier, an independent watchmaker who worked in Carouge, Switzerland, is credited with devising the mechanism that enables this function. In addition to the easily adjustable international settings, Cottier’s watches, the first of which appeared in 1931, often featured dials handsomely decorated with images of the globe. In the 1930s and ’40s, as plane travel was becoming more convenient and more popular, Cottier sold his world-timer design to a number of companies, most notably Patek Philippe, whose collection still includes versions of these watches.

Although many world timers share a similar aesthetic and similar heritage, their functions range widely and suit a variety of travel habits. Vacheron Constantin’s well-proportioned Patrimony Traditionnelle World Time, for example, seems to have been designed for voyagers who trek to the world’s most arcane time zones. Its movement can register the additional half-hour delineation found in Venezuela and on the Indian subcontinent, and it can note the 15 minutes that distinguish Nepal’s time from the rest of the world’s.

Travelers who visit more conventional destinations might prefer an easily adjustable model such as Girard-Perregaux’s ww.tc Chronograph. The company has produced a special version of the watch that indicates the opening and closing times at the world’s major bourses. One model even lets you know when the boutiques at premier shopping destinations open and close. This information is accessible through a second crown, which is a design element that Cottier incorporated into some of his watches. Patek Philippe’s WorldTime, Ref. 5130R, a direct descendent of Cottier’s work, employs a button instead of a second crown.

Cartier’s new travel watch, the Calibre de Cartier Multi Timezone, departs from the Cottier-influenced designs by placing the destination indicator on the side of the watch. The dial registers the number of hours your current location is ahead of or behind the time at home, a function that might be useful when you are deciding whether to take a nap after your plane lands.

Compelling as the designs of world timers may be, a GMT hand offers simplicity—an attribute recognized by Ulysse Nardin, DeWitt, F.P. Journe, and other technically adept companies that have used the GMT format for their travel watches. In its basic form, the GMT can be added to other complications relatively easily. Corum has incorporated the mechanism into its Tourbillon GMT, adding another utility to the watch. In Carl F. Bucherer’s TravelTec, which packs an extra time-zone indicator in the case, the GMT serves as a base for additional travel-related functions.

Travel watches are usually admired for their visual and utilitarian qualities, while their tactile assets are overlooked. But when selecting a travel watch, it is worthwhile to feel the way it works. One of the most underappreciated qualities of these watches is the manner in which their time-zone functions engage. The best produce a distinct clickingsensation as you shift the indicator from one zone to the next, letting you know that you are indeed reading London time and have not slipped over to the Azores. Vogard’s Datezoner, which features a lockable, spring-loaded bearing system within its case, offers one of the more reassuring clicks. As a travel watch should, it lets you know that you have the right time in the right place—whether you are there or not.