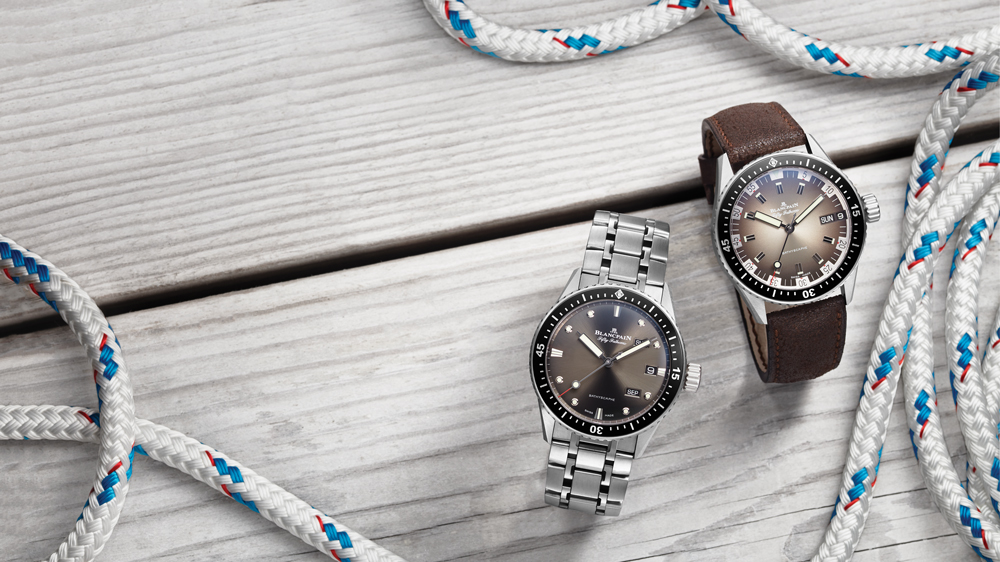 Most watch enthusiasts, especially those who like their water sports, are aware of Blancpain’s Fifty Fathoms line, which has been a prominent part of the company’s collection for more than 15 years. Many correctly identify it as one of the most credible dive watches, one that traces its roots back to the beginnings of scuba in the early 1950s. Hardly anyone knows, however, how close this legacy came to being lost, and how its recovery contributed to the modern Fifty Fathoms and its sister watch, the Bathyscaphe.

Like many historic watchmaking names in Switzerland, Blancpain was all but bankrupted by the success of cheap quartz watches during the 1970s. With its facilities kept afloat only by the production of movements for companies like Omega, little thought was given to the future of Blancpain as a brand.

“Most of the brand’s documentation was destroyed in 1979 during the quartz crisis, when they thought the brand would never come back,” says Marc Hayek, who has served as CEO at Blancpain since 2002. “Some of the archives were destroyed by fire, but most [were] simply thrown away to make space.”

The company was famously purchased just four years later, in 1983, by Jean-Claude Biver and Jacques Piguet. Biver revived the company along his own lines, presciently designing an operation that would be a leader in the revival of luxury mechanical watchmaking. That version of Blancpain emphasized the company’s roots in the 18th century, conveniently glossing over the period during the 20th century when it passed out of the original family’s hands. But it was during this period, while it was under the control of the Fiechter family, that Blancpain developed both Fifty Fathoms and the Bathyscaphe. Both models lay dormant until the Swatch Group, having purchased the brand in 1993, appointed Marc Hayek as CEO in 2002.

“I knew about the Fifty Fathoms, that there was one,” recalls Hayek, an avid diver himself, “but I really discovered it when I started working at Blancpain.” One of Hayek’s first acts after signing on at the company was to launch a limited-edition re-creation of Fifty Fathoms. The re-creation drew interest from new quarters, including an unexpected one: former company president Jean-Jacques Fiechter, who had overseen the original Fifty Fathoms and Bathyscaphe but had not participated in the company revival under Biver’s ownership.

“It was Mr. Fiechter who got in contact with us,” says Hayek. “He said, ‘I see what you’re doing with the Fifty, and I have some stuff, some documents that I did not pass along previously.’ We started to talk and I began discovering things. Who better to tell the story than the man who actually developed the watches?”

Hayek discovered an unknown relationship between the two models. Fifty Fathoms was groundbreaking as a diver’s instrument, but its size shocked conventional watch buyers who wanted a waterproof watch more in keeping with the compact models of the time. In Hayek’s words, the Bathyscaphe was “a watch that was also a dive instrument. They brought the size down closer to where watches were at the time by reducing the size of the bezel.”

Blancpain’s Fifty Fathoms Bathyscaphe, which was launched in 2013, was a mirror of the civilian-friendly original model, albeit with concessions to modernism in the form of materials and finishing. “The Bathyscaphe is closer to a regular Blancpain. I learned this from [Fiechter], how he developed it, how it grew,” says Hayek. “I felt it was history repeated. It felt right.”

Hayek’s take on the brand, while perhaps less of a marketing sensation than Biver’s, has given Blancpain newfound credibility as watch collectors discovered how company histories were being manipulated for the sake of sales. But beyond this, it may be Hayek’s personal passion as a diver and his sincerity that puts a stamp of credibility on these watches. “I was a diver way before Blancpain,” he says, “but I started using the Fifty Fathoms with the first watch we produced in 2003. Thank God it worked!”