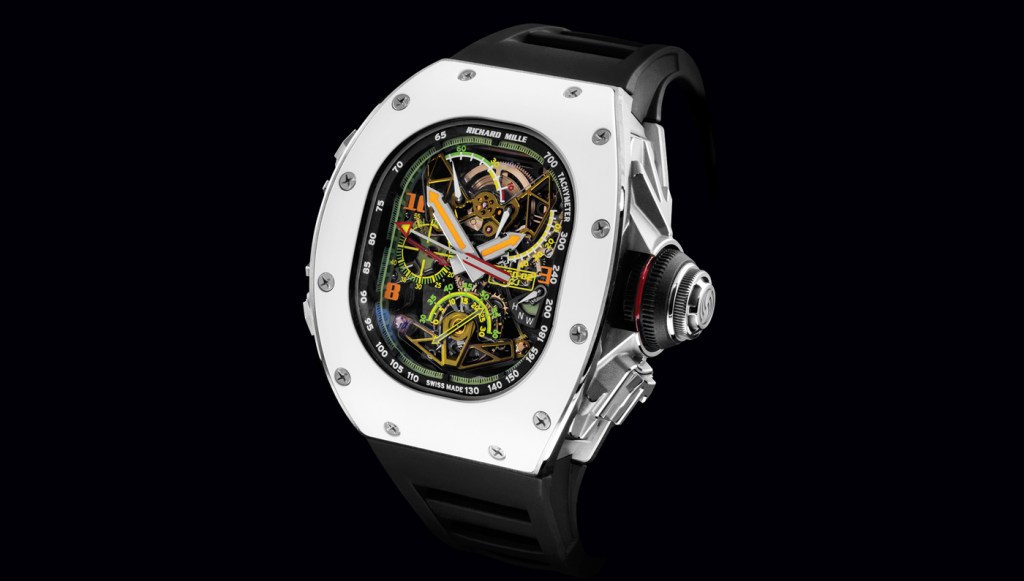 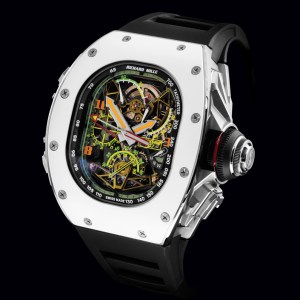 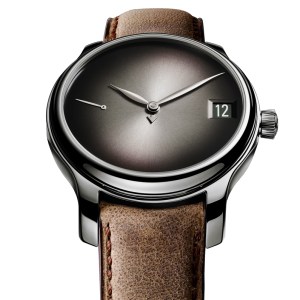 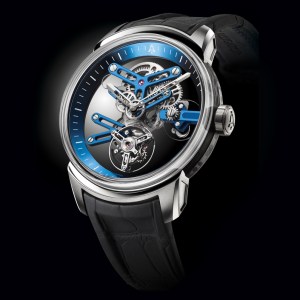 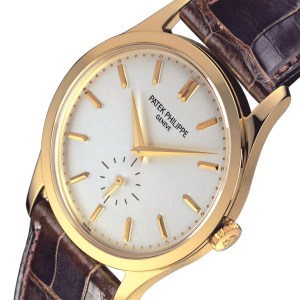 In the early 1980s, as Switzerland confronted the threat of modern quartz technology, adventurous collectors discovered the allure of vintage timepieces. Old Patek Philippe wristwatches were especially coveted, particularly round dress models with ultrathin movements, later dubbed the Calatrava models. The company made many versions over multiple decades, but aficionados discerned an underlying aesthetic consistency, which they traced back to 1932, when the company’s new owners introduced the Bauhaus-inspired Reference 96.

Elegantly understated, the three-handed 96 was a success from the outset. The product gave the brand new vitality during the Great Depression and also served as a sort of prototype for all the uncomplicated round Patek Philippes that followed. More than just a term of convenience for collectors, Calatrava embodied a design paradigm, as the company affirmed in the mid-1980s by applying the Calatrava name to an ever-growing family of timepieces. Today Calatrava is one of the brand’s most popular watch lines. Instantly identifiable and endlessly generative, it’s a bona fide design classic.

That makes Calatrava a genuine rarity. In an industry driven by novelty, classics are few and far between. They’re also hard to identify before they’ve stood the test of time. Nevertheless, understanding the essential attributes of past classics can provide insight into which watches of today may be classics for future generations of connoisseurs.

One way of creating a future design classic is to look to the past. That’s the approach taken by Jaquet Droz with the Grande Seconde Off-Centered. In the 18th century, Pierre Jaquet-Droz created a pocket watch with a distinctive figure-eight layout. Diminutive hour and minute hands were set in a small circle at the top of the dial while a longer second hand was set in a much bigger circle below. The layout of two overlapping subdials has been used extensively by the Jaquet Droz brand in recent years. Versions have been created in traditional white enamel with black indicators and vice versa, and even with an exotic variety of dial materials. With the Off-Centered, Jaquet Droz rotated the dial by 30 degrees, introducing a highly contemporary asymmetry. The effect is most dramatic in the model with an onyx dial, with the subdial indicators reduced to simple notched rings of white gold. What Jaquet Droz has achieved is to transpose time-tested proportions into a modern vernacular. The watch is unmistakably new yet immediately familiar.

Moser has done something equivalent, only in a far briefer time span. In 2005, the company launched its Perpetual Calendar with an unusual movement developed by Andreas Strehler. In contrast to most perpetual calendars, which advertise their complicated movements with intricate dials, this perpetual used a bare minimum of indications: a date window and a pointer concentric with the hour and minute hands to indicate the month. (The 12 hourly markers also served to indicate the 12 months in the year. A leap-year indicator was visible only through the sapphire caseback, for use only when the watch was set.) Strehler’s parsimoniousness was remarkable, perhaps even unprecedented, but a decade later Moser showed that it was not the bare minimum. The Endeavour Perpetual Calendar Concept sweeps the fumé dial clean of all indications including numerals and the company’s brand name. The subsidiary seconds dial is also removed, and most recently the power-reserve indicator has been eliminated. The Concept series is being produced only in very limited quantities—and most certainly will not replace the original model—but the process of stripping down the original watch exposes the classic distinctiveness of the underlying design and also the vast space still open for future variations.

Variations on a theme come naturally to Cartier, a company that has been tweaking its classic Tank since 1917. This year, Cartier launched a new line of watches that draws on an inspiration nearly as venerable. Like the Tank, which was modeled on the Renault FT-17 tanks that Louis Cartier saw during World War I, the Drive de Cartier takes its design cue from the grille of a vintage automobile. To some, the watch might appear to have been in production since cars sported large radiators. Cartier has effectively channeled a pedigree by evoking a lineage that might have been, and may well become, real in time.

At first, the New Retro by de Grisogono appears to be playing the same temporal game. The two-handed watch overtly draws on vintage sources. The smooth shape was inspired by designer Fawaz Gruosi’s cigarette case, and the dial’s wide format and bold typeface intentionally evoke midcentury alarm clocks. The dial colors also belong to another era. (Gruosi’s “vintage green” is doubly nostalgic, resembling an outdated hue that has been weathered by time.) The New Retro is not retro in the conventional sense, however, because the implementation of Gruosi’s midcentury vision belongs unequivocally to the present. The two curvaceous sapphire crystals forming the case could never have been manufactured in the era they suggest, and the Super-LumiNova markers are far brighter than radium. The New Retro is not an ersatz midcentury object, but rather a timepiece that a midcentury designer might have made were he living in 2016. Through the extreme compression of time, de Grisogono has made an instant classic, a watch that simultaneously exists in the past and the present.

In 1971, Audemars Piguet found itself in a situation similar to Patek Philippe’s despair during the Great Depression. Seeking a timepiece that would stand out in a stagnant market, the company turned to the independent watch designer Gérald Genta. Their design brief was extremely brief: The company wanted an “unprecedented steel watch”—and time was of the essence. Genta responded in less than 24 hours, submitting his first sketch of the Royal Oak.

Inspired by an old-fashioned diving helmet, the timepiece was iconoclastic in all respects, from the exposed screw heads on the octagonal bezel to the brushed finish that treated steel like a precious metal. A luxury tool-watch that looked simultaneously dressy and sporty, the Royal Oak was a perfect paradox.

Most people in the industry reckoned that Genta’s concept would put Audemars out of business. Instead, the Royal Oak reinvigorated the company and launched an entirely new luxury-watch category. What was paradoxical in the ’70s now seems perfectly natural. Genta’s most radical watch has become a classic precisely because of its winning iconoclasm.

By the time Richard Mille began making watches in 2001, sporty luxury was well established. But Mille took the dichotomy to a level that even Genta couldn’t have imagined, creating a tourbillon in materials that belonged to the realm of racecars and aviation. His logic was peerless, redefining the wristwatch as a high-performance machine, and he has pursued it relentlessly ever since. As a result, even his most extreme pieces—such as the new RM 50-02 ACJ Tourbillon Split Seconds Chronograph—have a logical inevitability. It seems only natural that this collaboration with the Airbus private jet division should use titanium-aluminum turbine alloy for the case, and that parts should be treated with the jet manufacturer’s own anticorrosive coating. Like AP’s Royal Oak line, Richard Mille’s industrial design has achieved an internal consistency that imbues each new piece with classic status.

The iconoclasm of Robert Greubel and Stephen Forsey is of a different kind. Conceiving new models as “inventions,” they’ve spent the past couple of decades exploring the extremes of mechanical complexity, expressed through traditional techniques and finishes. That ambition has resulted in horological achievements including the Double Tourbillon 30° and the Quadruple Tourbillon. The recently released Signature 1 has none of that complication. A time-only watch that is the simplest timepiece the company has ever produced, it lays bare the design language that all Greubel Forsey timepieces share. The avant-garde interplay of traditional finishes—including Geneva stripes and frosting—visually organizes the movement’s multitiered build. The underlying architecture of the movement is asymmetric, which plays out in the dial placement. The language is so specific and consistent that Greubel Forsey can innovate relentlessly without losing its core identity. Much as the Endeavour Concept affirms Moser’s aesthetic, the Signature 1 sparely demonstrates why all Greubel Forsey timepieces are immediately recognizable

A new design language, the essence of a classic, is no meager achievement. It must be atypical, intelligible, and capable of expressing more than a single statement. All three of these qualities are more speculatively manifested in the new U20 Ultra-Skeleton Tourbillon by Angelus. The main plate of the U20 is a slab of sapphire crystal on which the flying tourbillon and other components have been mounted. Absolutely everything is plainly visible, held in place with blue titanium bridges screwed directly into the transparent sapphire. Skeletonization has been one of the most versatile techniques in horology over the past couple of centuries. The U20’s ultra-skeletonization has the potential to add a vast range of new possibilities.

Whether the recently relaunched Angelus continues to develop this aesthetic remains to be seen. Much as the Bauhaus rigor of the Reference 96 resonates through Patek Philippe’s Calatravas, extreme skeletonization could become a proprietary design quality of Angelus. Then again, naked transparency could become a new mainstream, spreading throughout the industry like Gerald Genta’s approach to making dress watches in exquisitely finished steel. When it comes to the future of classics, history makes all the difference.

This Ultra-Rare Rolex Dive Watch Could Fetch up to $2.6 Million at Auction