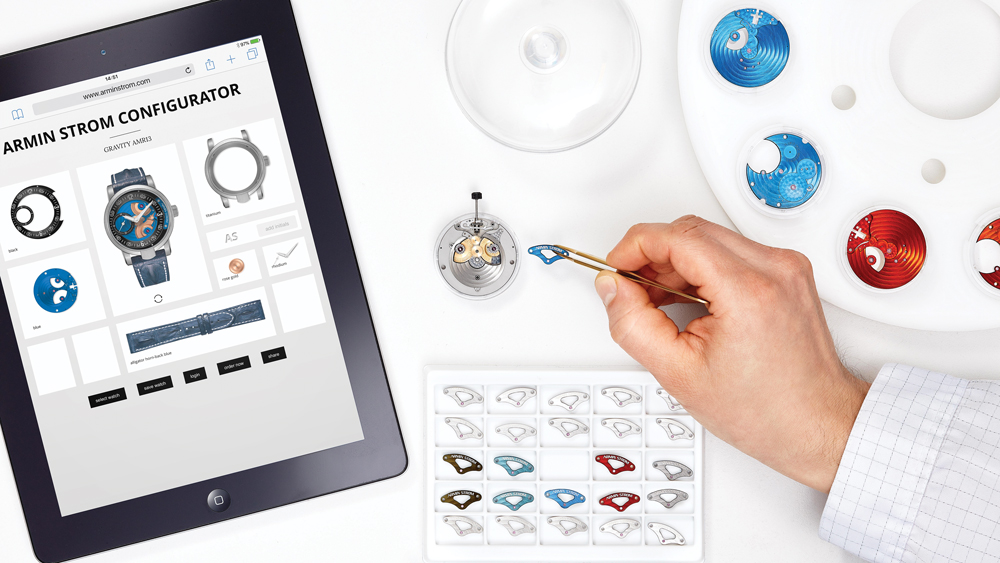 Manipulating the tablet-based app that allows you to customize Parmigiani’s latest Bugatti Type 390 wristwatch is really quite addicting. Clearly knowing their audience, the developers have provided a way not only to customize the metals, colorings, finishes, and composite materials on the teardrop-shaped timepiece, but—most importantly—to fondle (virtually) the new creation as well. With a few gestures, the Parmigiani rep demonstrating the configurator app was able to turn a large-scale image of the watch this way and that, exposing a variety of new surfaces for additional customization. As he continued with an ever-widening grin, it became clear that the demonstration was turning into a play session. For the hard-core watch enthusiast, so easily tempted and distracted, Parmigiani might be on to something.

Or are they? Those looking forward to downloading this shot of puerile joy will be disappointed to learn that Parmigiani’s configurator can, for now at least, be experienced only at retail. Like many of the digital aids that are coming online in the bespoke watch market, it is intended primarily as a sales tool, used and controlled by someone knowledgeable enough to guide the customer into making choices that won’t cause buyer’s remorse. Watch companies are hedging their bets, for as much fun as it is to dress up an electronic watch, plunking down as much as a couple hundred thousand on what amounts to a computer rendering is still a gutsy call for most buyers. And while apps like Parmigiani’s configurator will let you choose between aesthetic treatments like perlage or carbon fiber for the watch’s side panels, alterations to the holy grail of watch customization—the movement—still require hand-holding. Human guidance, it seems, remains the indispensable element of the electronic bespoke watch revolution.

Looming over these decisions is Vacheron Constantin’s decade-old experience with the Quai de l’Ile. Launched in 2008, the model was perhaps the most cutting-edge the brand has ever produced. It too was designed to be customized from the outset, and with a touchscreen tool—three years before the iPad—it provided clients with more choices than ever before. “Too much choice” was the conclusion the industry drew from its lukewarm reception, aided no doubt by a developing financial crisis the following year. Yet that psychology continues to pervade the bespoke watch market, even as technology makes choice easier to execute.

“Some people want to be able to choose but not necessarily get lost in making all the special choices one by one,” says the eminently practical CEO of Parmigiani, Davide Traxler, who, like others, hopes electronic solutions will address a much larger group than the elite clients who patronize the firm’s restoration and high-end bespoke services. “They want a selection they feel comfortable with, and I include myself in that group.”

Fendi, which just entered the high-end watch space with its Policromia MTO customizable watch, also believes in consultation—perhaps because its secret weapon is the a ability and artistic bearing of Luigi Vivone, design and development director for the timepiece division, who travels with the collection wherever it is presented. The system of nested decorative components allows the owner to construct a dial with a nearly endless variety of métiers d’art—including shades of mother-of-pearl, fields of diamonds, and various-sized inlays of exotic minerals including malachite and tigereye— all selected under the guidance of Vivone, who is equipped to show his clients exactly how the piece will look through the use of rendering software, which layers on the various components with a level of realism that exceeds the graphics in other specially coded apps. While the program remains on Vivone’s computer, he leaves his Policromia MTO clients with a printed rendering and a level of confidence that their creations possess a measure of his talent.

If you’re feeling left out of this opportunity to play with watches on your computer, check Armin Strom, whose web-based watch configurator has been available to anyone with Internet access for almost two years. The brand’s modern skeleton watches, and even its new Mirrored Force Resonance watch, are all available to clad in a variety of metals and colors for their various components. But while the online facility might suggest an artistic free-for-all, the reality is much more in line with industry expectations.

“In practice, the majority of our clients prefer to make just a few small changes from the most popular watches we sell,” says Armin Strom agent Jean-Marc Bories. Though the technology has yet to change most watch buyers into true bespoke customers, the next generation may very well be different. “A client recently came into one of our retailers with his young son,” says Bories, “and while he looked at the pieces in the case, his son was quickly mastering the configurator and was soon calling to his father, ‘Hey Dad, come build a watch with me!’ ”