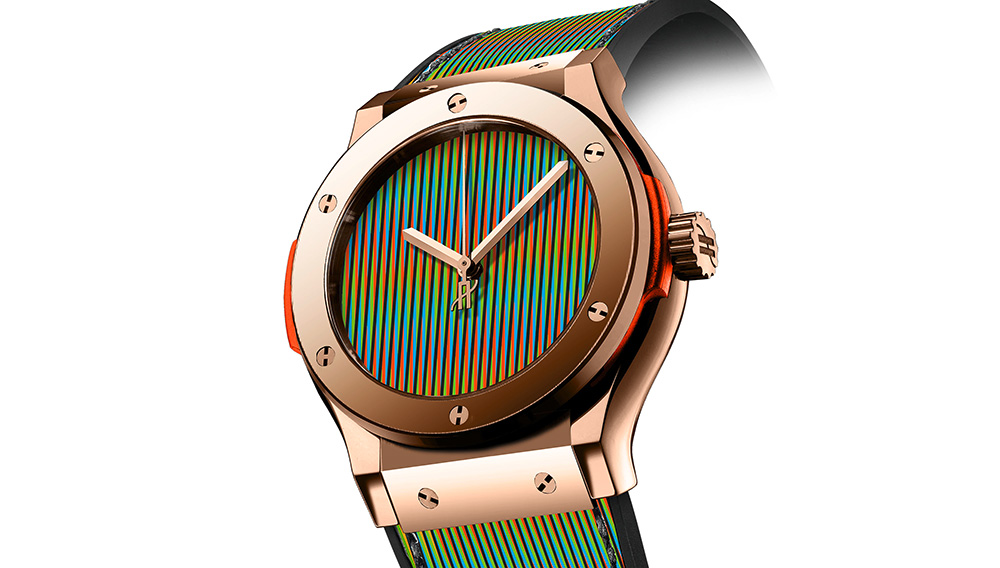 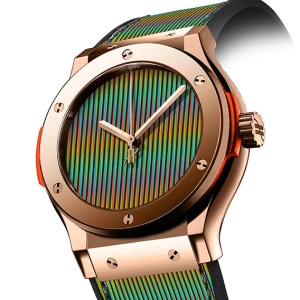 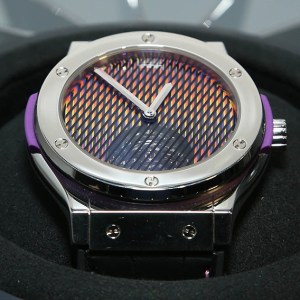 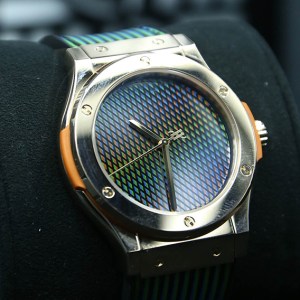 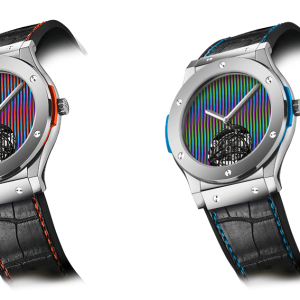 VIP guests were invited to join Ricardo Guadalupe and Carlos Cruz Delgado, representing his father, Maestro Carlos Cruz-Diez, for an intimate cocktail event with Johnnie Walker® Blue Label™ at the Espace Expression Gallery in Miami’s Design District. During the reception, Hublot unveiled the limited edition Classic Fusion Cruz-Diez timepieces to attending guests – previously launched exclusively in Venezuela – which marked the first time the pieces have been seen abroad. It is through this partnership that Hublot continues to fuse the worlds of watchmaking, art, color and movement.

Carlos Cruz-Diez’s artistic career is remarkable. The Franco-Venezuelan artist is one of the leading figures and key representatives of kinetic-optic art, the artistic movement which calls for “an awareness of the instability of reality” by placing movement and space at the heart of its works. His artistic approach has led to him being regarded as one of the great color theorists of the 20th century. His research has helped create a new way of understanding the phenomenon of color, expanding its perceptual universe. In his works, colors are perpetually being formed and broken down before our eyes, suggesting that color is not an established truth, but rather an unstable reality which is continually changing in time and space.

Hublot invited Carlos Cruz-Diez to adapt one of his works — Chromointerférence (1964) — to three of its timepieces. Juxtaposed colored lines have been printed on the dials. Superimposed over these fixed designs is a mobile black frame which moves every minute, generating new ranges of colors which do not exist on the support, and changing the perception of the previous ranges. This allows the dials to offer a harmonious show of different colors over a 12-hour period. The cycle then begins again.

Ricardo Guadalupe, CEO of Hublot, shared: “It is an honor to be here tonight to celebrate this revolutionary artist, Carlos Cruz-Diez, and to introduce a new collection of timepieces in his honor.  Hublot has a long-standing history with Latin American artists, having partnered in the past with icons including Romero Britto, Oscar Niemeyer and more. We are thrilled to launch these three timepieces with our Venezuelan customers, and a few select others, and to celebrate the Art of Fusion as we continue to join together watchmaking and art.”

All measuring 45 mm in diameter, these “Classic Fusion Cruz-Diez” timepieces are available in three versions: an 18K King Gold version, a black ceramic version and a platinum Tourbillon version limited to ten timepieces. Unique to each timepiece, the dial on this Grande Complication presents a harmonious show of different colors. The pieces will be available exclusively at the Hublot Galerie in Miami’s Design District and in Hublot’s Venezuela boutique.

Hublot continues its support of and dedication to Latin American artists, which have previously included partnerships with artist and sculptor Romero Britto and the late architect Oscar Neimeyer. The 2014 FIFA World Cup Brazil™, for which Hublot served as the Official Timekeeper and Official Watch, marked the start of the partnership between these worlds of Art and luxury timekeeping.  In 2011 Hublot joined together with the great Oscar Neimeyer to design the Official Countdown Clocks of the 2014 FIFA World Cup Brazil™. The three clocks, commissioned especially from Hublot for Brazil, were also the last project to have been personally led by Oscar Niemeyer, the great Brazilian architect – an iconic presence in the country’s culture and one of the most renowned architects of the 20th Century – prior to his passing in December 2012.  The clocks were placed around Brazil in celebration and in anticipation of the 2014 FIFA World Cup Brazil™ that summer.

Romero Britto, whose art is influenced by the Pop Art and Cubism art movements, also partnered with Hublot during this time to design and paint the multicolored football-inspired watch case for Hublot, the Official Timekeeper and Official Watch of the Cup. This motif was extended to the “Hublot Loves Football Campaign”, a football-fueled photographic exhibition, which toured globally. Most recently, Hublot launched two timepieces with the Pop Art icon – the limited edition Classic Fusion Enamel Britto, available in platinum or ceramic versions, and the one-of-a-kind Classic Fusion Only Watch Britto, available in black ceramic. All of these timepieces combine the traditional fine art of hand enameling with the contemporary pop art and cubism style for which the artist is known.