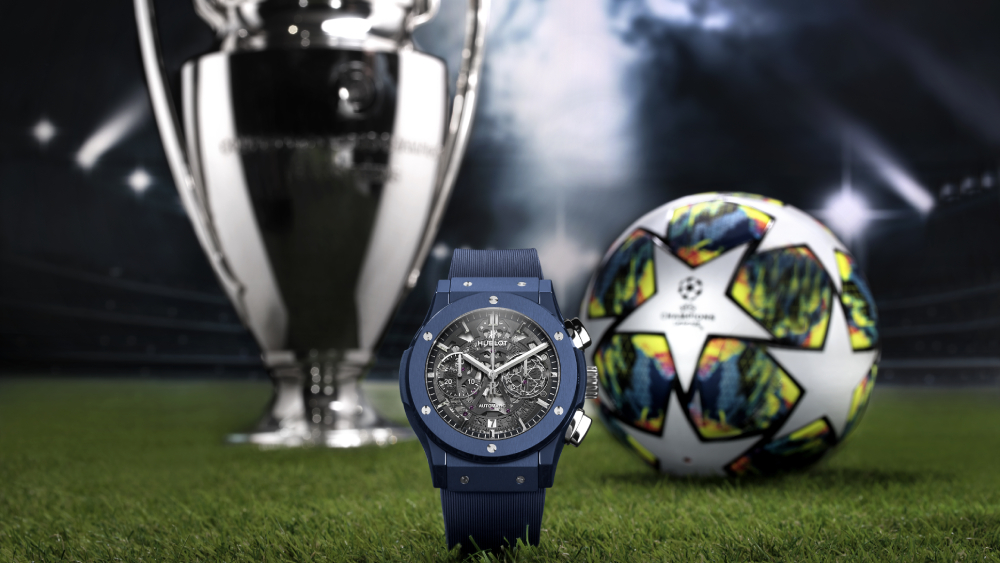 Hublot just gave us one more reason to tun into the UEFA Champions League16-round soccer competition.

To celebrate what many consider Europe’s most prestigious soccer club tournament, its sponsor, Hublot, is releasing a special Classic Fusion AeroFusion Chronograph. Only 100 examples of the limited-edition timepiece will be made.

The slick chronograph has a satin-finished ceramic case measuring 45mm rendered in a rich shade of midnight blue that contrasts with the polished titanium crown, pushers and screws around the perimeter. A skeletonized dial allows the wearer (and envious onlookers, no doubt) to view the wildly intricate inner workings, including the proprietary HUB1155 automatic chronograph calibre, which has a 42-hour power reserve. The transparent sapphire caseback only adds to its dazzling look. A subdued take on branding, the UEFA Champions League logo is built into the 3 o’clock subdial itself. It secures with a tonal rubber strap to keep the athletic feel going strong.

The sapphire caseback of Hublot’s limited-edition chronograph.  Courtesy of Hublot

“This is an exciting day for fans of European football, who will be tuning in to the next round of UEFA Champions League games this evening all over the world,” said Ricardo Guadalupe, Hublot’s CEO. “They will see the famous Hublot referee boards used by the fourth official, and from today, they can also wear the beautiful blue ceramic Classic Fusion AeroFusion Chronograph UEFA Champions League, a watch made for football fans. Hublot loves football!”

The timing of the announcement couldn’t be better, as the Champions League returns to action this week. In Tuesday’s first round of 16 games, star-studded PSG was stunned by an Erling Haaland-led Borussia Dortmund, while scrappy Atletico Madrid toppled defending champs Liverpool in a defensive masterclass.

Hublot’s ties to the sport run deep. The company became the first luxury brand and first Swiss watch brand to get involved in soccer when it sponsored the Swiss national team in 2006. The watchmaker has subsequently become the official timekeeper of the UEFA and FIFA World Cup. Let the games begin!