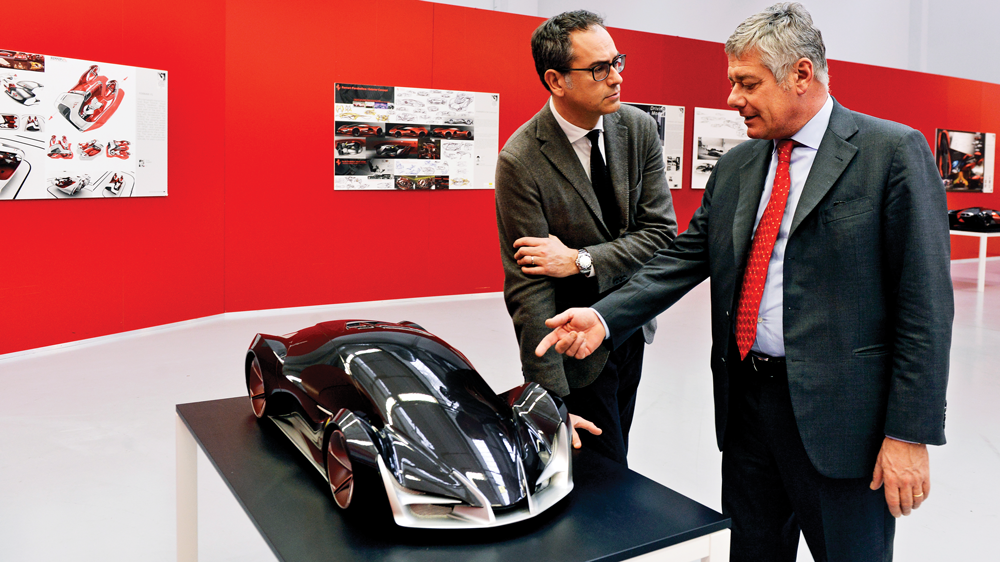 At Ferrari’s Design Center, the incubator of the marque’s famously sculpted sports cars, designers, and modelers work behind closed doors away from the prying eyes of visitors. Secrecy is sacrosanct at the sprawling Maranello headquarters, and guests are required to place stickers over the lenses of camera phones while touring the complex, with the exception of the public museum charting seven storied decades both on and off the track. In such an environment redolent with design success, it seems logical that Hublot CEO Ricardo Guadalupe would take the unusual step of handing the creative reins for a special 70th anniversary edition over to Ferrari’s head of design, Flavio Manzoni, and his team.

While previous Hublot Ferrari designs benefited from Ferrari’s input and blessings, the Techframe stands apart, as it is the first watch designed by Ferrari. “In this case, we decided to close the door because we didn’t want to be too influenced,” says Manzoni, whose team generated five concepts to present to Hublot. “We were convinced that a different mindset, a different approach, could be integral to creating something different in this specific field, without being too contaminated by the normal principles that maybe a designer who works on watches every day is respecting. Instead, we were free.”

Simone Sabatucci, a digital modeler at Ferrari and a significant contributor to the watch’s striking design, explains that the first concept evoked the sculpted lines of the 458, Ferrari’s 562 hp V-8 riding on an F1-inspired suspension. But the Techframe took a more holistic and radical turn. “This watch is not inspired by the styling of a car; it was inspired by the DNA of Ferrari,” he says.

While Ferrari’s curvaceous bodywork must have been a tempting muse, Manzoni’s team dug deeper—all the way down to the bones. “We took inspiration from the chassis, the space frame, of our cars that are normally a combination of different materials—aluminum, alloys, and carbon fiber,” says Manzoni. “But there is an intrinsic technological beauty in these kinds of structures, and that’s why we decided to eliminate the skin and stay concentrated on the skeleton.”

Non-automotive stimuli included the work of Pier Luigi Nervi, the prominent mid-20th-century architect and engineer whom Manzoni, an architect himself, admires. He points out that Nervi’s reinforced concrete structures epitomize the goal of distributing forces to attain maximum strength in a minimal structure. Imagery from science fiction movies and TV shows, such as the 1970s-era Space 1999, were another font of aesthetic inspiration for Techframe’s striking lattice-like 45mm case made from titanium, Hublot’s proprietary King Gold, or a distinctive unidirectional carbon, PEEK (Polyether Ether Ketone) with each numbered variation limited to 70 pieces. “There were five concepts, all beautiful, but this was the most intriguing,” says Manzoni. “It is something completely new, never before designed for a watch.”

Techframe’s skeletal structure also embodies Ferrari’s guiding principle of lightness and removing all but what is necessary for structural integrity. “Normally the form of a Ferrari is conceived by the subtraction of materials,” Manzoni says. “We start excavating to create natural channels for the air flow, so we create a form that is not only a kind of envelope, but also completely aerodynamic.”

He references the aggressive J50 supercar, unveiled last December to mark the 50th anniversary of Ferrari Japan, as an example of how Ferrari designers perfectly balance full volumes with voids. The car also projects interplay between the bold red surfaces of the bodywork, the black carbon fiber, and glass spans that imbue the design with artistic character.

In keeping with Ferrari’s treatment of its engines as technical jewels, the first step of the Techframe project was to select an appropriate movement—a manual-winding monopusher chronograph tourbillon—chosen for both its technical and aesthetic qualities. Ferrari’s designers decided to rotate the movement so that the crown, raised by a black PVD titanium insert and embellished with the iconic Prancing Horse, is positioned at 4 o’clock. This allows for a red anodized aluminum lever chronograph pusher at 3 o’clock that evokes a paddle shifter and enhances the ergonomics of chronograph operation for the driver. The shifting of the movement also moves the tourbillon to 7 o’clock, creating what Manzoni refers to as a “nice, dynamic imbalance.” Even tiny details such as the typeface used on the dial and the shape of the hands trace their lineage to a Ferrari instrument panel.

From Maranello, the project moved to the engineers and watchmakers in Hublot’s manufacture in Nyon, Switzerland, outside of Geneva. Manzoni’s team relished the chance to step out of their usual routine and apply their finely honed skills to watches, which are theoretically linked with cars. “It was a window of opportunity for us to work on something else,” says Manzoni. “You have to consider that this is a very complex object, but our cars are enormously more complex. It’s kind of a breath of fresh air compared to what we do every day.”