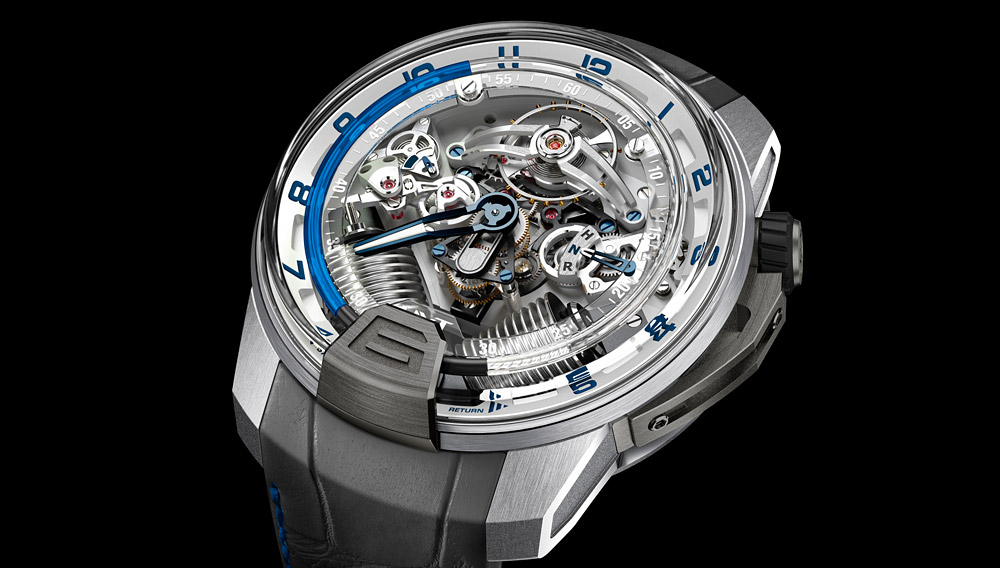 HYT, the Swiss watchmaker that made waves in 2012 when it released the world’s first watch that uses fluids to tell time, is back with variations of its H1 and H2 models. During this year’s Baselworld watch and jewelry show, held March 27 to April 3, HYT showcased the H1 Red2 and the H2 White Gold Blue and Platinum Red. In each of these versions, the neon-green fluid found in the brand’s original watches has been replaced with either vibrant red or blue.

HYT’s unique approach to timekeeping is based upon the science of fluid mechanics. The transparent glass tube lining the perimeter of the watch’s dial is linked to two bellows powered entirely by the watch’s movement. The slow inflation of the first bellows and deflation of the second creates a pressure differential that moves two liquids—one treated with an additive that makes it glow and the other a viscous, translucent fluid—around the dial to indicate the passage of time. Once the glowing liquid reaches the 6 o’clock position, the watch’s bellows reverse and return the fluids to their initial position.

The first of the colorful new models shown in Basel, the $69,000 H1 Red2, is a variation of HYT’s original H1 design and features a pink-gold-and-titanium case and red timekeeping fluid. The H2 collection—which displays touches inspired by automotive design, including bellows arranged in a V configuration like the cylinders of an engine and a crown position indicator that recalls the shifter of a manual transmission—has two new additions: the $160,000 White Gold Blue, which, as its name in implies, features blue liquid, and the $190,000 Platinum Red, equipped with red liquid. The HYT H1 Red2 will be limited to 50 examples, and the H2 White Gold Blue and Platinum Red will be limited to just 20 and 15 pieces, respectively. (www.hytwatches.com)