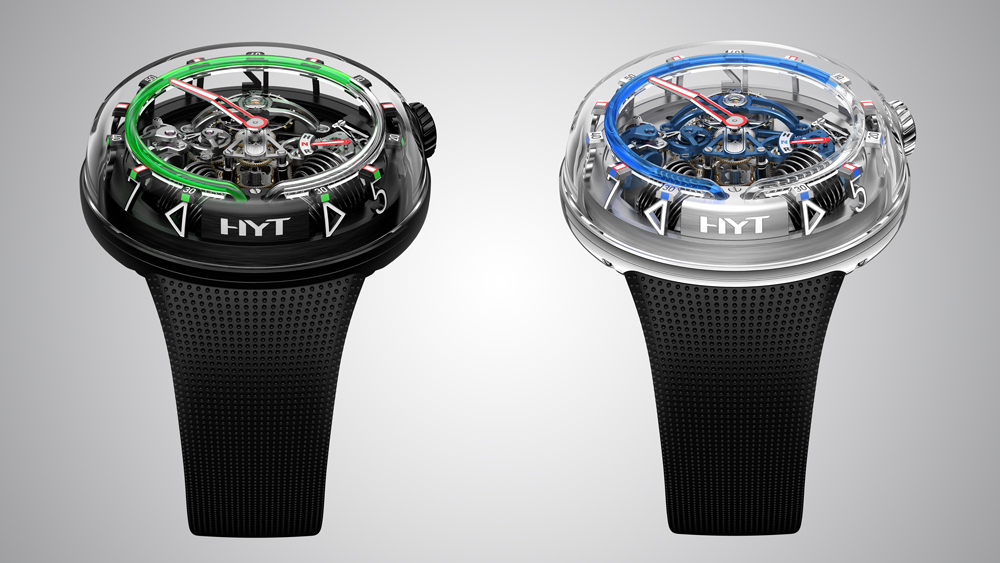 HYT has a message. In an exclusive interview with CEO Gregory Dourde, Robb Report learned that the company is currently working on the design of a new H20 timepiece—a watch that will marry the sapphire-domed aesthetic of the original, released earlier this year, with some of the traditional aesthetics of the brand’s H2 Tradition timepiece. “On the new timepiece we will indicate the hours on the cubes [indice-like markers] where the minutes were indicated on the H2, which means it gives us the possibility to do something different with the space where the numbers are currently indicated on the H20,” says Dourde. “We wanted to use that space to show a message—’Time Is Fluid.’ That is the essence of what we do.”

The design of the new watch was just being finished when we sat down with Dourde at New York City’s Sixty Soho Hotel. The company won’t be officially unveiling it until October, so the visuals are under wraps for now. The new timepiece will, of course, feature the independent watchmaker’s liquid capillary technology that tells time via the movement of the colored fluid instead of using hour hands. The new timepiece will count minutes at the center and will expand on the classic guilloche decoration, both seen in the H2 Tradition, but will be presented in the modern casing of the sapphire-domed H20. As Dourde puts it, “We will take some of the spirit of the H2 Tradition and we will zero-fy it.”

Script messaging has become a trend in the luxury industry from timepieces like Greubel Forsey’s GMT Earth or Tourbillon 24 Secondes Edition Historique to more pervasive luxury brands to Berluti’s scritto collection incorporating written messaging into product that further drives home the brand’s story. Other brands like Jaquet Droz have created automata that will literally sign your signature or any message of your choosing. It’s a poetic trend in an industry catering to those in search of extra meaning in their treasured material possessions.

The “Time is Fluid,” messaging, which will be inscribed around the inside ring of the sapphire case of the new H20, will only be available in English. But Dourde says they do have the capability to do bespoke—a service that accounts for 20 percent of their business (and growing), as collectors seek out HYT’s unique aesthetic. But only top collectors of the brand—clients that own not one but several of the watchmaker’s timepieces—will be considered for such requests.

The H20 proved popular with retailers who were looking for something interesting to offer top collectors in a year filled with big name brands unveiling safe, lower priced releases, many of which were in steel to lure in clients at more affordable prices. Just 50 pieces were made of the H20 and all were sold earlier this year. By the looks of the new H20 “Time is Fluid” timepiece, it will sell out rapidly as well. Plus, Dourde says the brand is already preparing another new H20 for 2019 and will release two limited-edition extensions in a special combination of colors sometime before then.