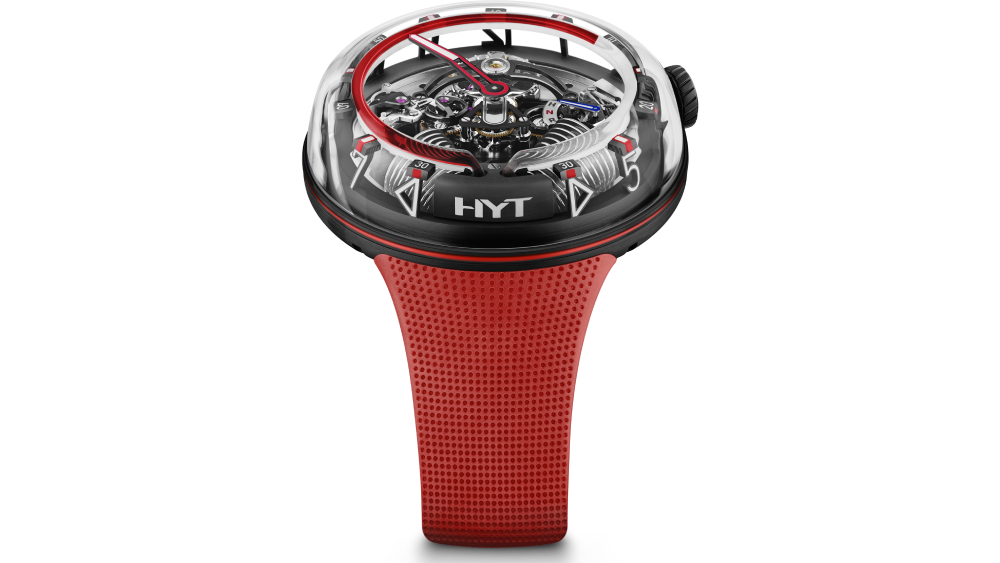 Capped to a run of only 5 pieces, this new iteration of the H20 watch, so named for its fluid-filled case, is a technical feat that uses water not only as a means of highlighting its overall transparency but also as a metaphor pondering the passage of time. The silhouette has been continually refined with this version designed to resemble a pebble weathered to perfect smoothness. The domed crystal has a crimson line that works around the perimeter to match the small red markers around the 51 mm case.

This patented micro-fluidic module surrounds the exclusive central movement, which has a substantial 192-hour power reserve to boot. An intricate cam-follower system allows for transmission between the movement and fluidic module by converting rotation into linear movement.

The clear case back allows for an unobstructed view of the intricate interior.  Courtesy of HYT

The dial itself is skeletonized with a numerals ring and white Super-LumiNova interior to contrast with the black galvanic coating on the diamond-cut markers. Even the case back is clear to offer a peek at the delicate inner workings. The intelligent and consistent use of transparency is in keeping with HYT’s exploration of the interplay between time and space.  That exploration is further enhanced by details like the angled positioning of the two multilayered bellows which emphasize the three-dimensionality of the design.

If all of this sounds like it stands apart from most of the fine watch industry, it’s because it does. HYT’s pieces are designed to offer wearers a seamless union of science and art. It’s precisely that drive that led it to develop the first fluidic model released years ago. As the brand puts it, “By showcasing time’s passage, every watch becomes an invitation to value what was, what is and what may be.”

Make one of the rare collection yours for $101,119. Visit the brand’s website to learn more.