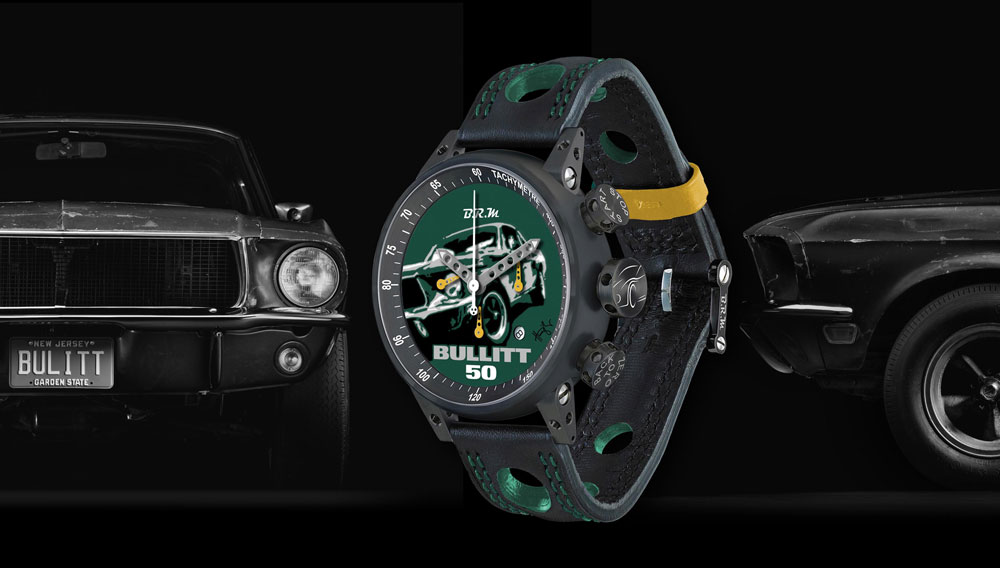 Fifty years ago today, Bullitt (an iconic thriller starring Steve McQueen in the titular role) was released in theaters across the United States. To coincide with the 50th anniversary of the film, Drive Toward a Cure—a nonprofit dedicated to Parkinson’s disease research and patient care—has partnered with motorsports chronograph manufacturer BRM Chronographes and professional automotive fine artist Nicolas Hunziker to create a one-of-a-kind timepiece inspired by the film’s original car, a 1968 Bullitt Mustang GT 390 that starred in a pivotal car chase scene.

“Steve McQueen has always been regarded as the King of Cool, and a big portion of that had to do with his passion for motorsports,” says Drive Toward a Cure founder Deb Pollack. “The chase scene in the original Bullitt movie is one of the most iconic film car chases in history, and the car itself has become a legend.” To commemorate the dark green vehicle, Hunziker hand-painted its likeness on the watch’s dial. The timepiece is further distinguished by an automatic chronograph, a 46 mm case made from a single block of aluminum, and a crystal-sapphire front and back. It’s valued at more than $35,000.

The vehicle is currently owned by Nashville resident Sean Kiernan. All of the proceeds from the raffle tickets will benefit the Michael J. Fox Foundation in memory of Kiernan’s father, Robert E. Kiernan Jr., who owned the Bullitt Mustang since 1974 and passed away from Parkinson’s in 2014. Drive Toward a Cure will be raffling off the watch through the end of January. Kiernan plans to announce the winner of the timepiece at the Grand National Roadster Show in Pomona, Calif., on January 27, 2019, where the original Bullitt will also be on display. Tickets can be purchased through Drive Toward a Cure’s website. Pollack hopes to sell at least 1,968 raffle tickets in honor of the year the car was released.