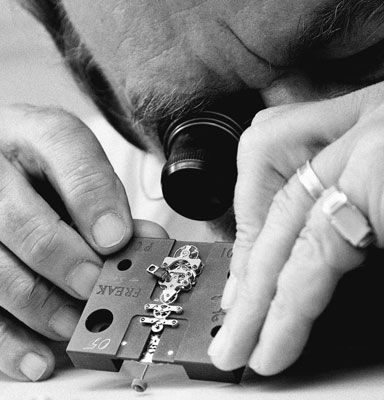 Ulysse Nardin received an early, though not immediately apparent, head start in the watch industry’s recent technology race. That advantage came in 1998, when longtime collaborator Ludwig Oechslin presented CEO Rolf Schnyder with a modified antique carriage clock. Oechslin had fitted the foot-tall portable clock with an escapement of his own design, which ultimately prompted the company to make the most significant redesign of the mechanical movement in almost two centuries.

Rolex, Patek Philippe, and other major brands now are updating movement mechanics with parts made from silicium (the Latin word for silicon and the industry’s preferred term for the material) and with new mechanism configurations that improve accuracy. However, Ulysse Nardin experimented in these areas years before its larger rivals did. Of course, like the advance guard in any technology, Ulysse Nardin has had to endure a series of failures en route to success.

The same is true of Oechslin and his clock. Oechslin, the scientist and scholar who has designed Ulysse Nardin’s most complicated pieces, tinkered with escapements to address the inefficiencies of the standard mechanical movement’s regulating organ, the anchor escapement, which has been in use since the early 19th century. Because it generates friction as it releases energy, the anchor escapement requires constant lubrication. This flaw reduces precision and dictates frequent servicing of the watch. Oechslin conceived a design that–instead of incorporating the conventional escape wheel and interlocking pallet–pairs two toothed wheels advancing together to release the energy of the mainspring and power the beat of the balance wheel. The interlocking teeth do not scrape against one another, and they provide a steadier impulse to the balance wheel. After years of experimentation and refinement, Oechslin installed a functioning prototype in his carriage clock and showed it to Schnyder.

Born in gabicce mare, Italy, and raised in Lucerne, Switzerland, the 55-year-old Oechslin is the archetypal bespectacled, brilliant-but-eccentric genius. He attained his watchmaking diploma from the Solothurn watchmaking school a year after he earned doctorates in philosophy, theoretical physics, and astronomy from the University of Berne. Oechslin also has studied archaeology, ancient history, Greek, and Latin. Currently, he serves as the curator of the International Watch Museum in La Chaux-de-Fonds.

Oechslin, who works for the brand on a contract basis, also is Ulysse Nardin’s most valuable watchmaking asset and the mastermind behind the company’s most ambitious projects. In the mid-1980s he was pursuing clockmaking and restoration when one of his pieces, an astrolabe clock that tracked the sun and moon, came to the attention of Schnyder. The two met and collaborated on the Astrolabium Galileo Galilei, a 1985 wristwatch that indicates the signs of the zodiac, the height and direction of the sun, sunrise and sunset times, the position of the moon and the major fixed stars, the phases of the moon, moonrise and moonset, and solar and lunar eclipses. The watch, the first of what would become a trio of astronomic watches called the Trilogy of Time, helped define the technical nature of the revitalized brand.

However, Oechslin’s work on the antique carriage clock initially left Schnyder nonplussed. “Ludwig showed me this escapement,” he recalls, “and I thought: ‘Great, you’ve just changed the one part of the watch that nobody can see, and never breaks down or has to be replaced.’ ”

At 71, Schnyder is one of the oldest executives in the watch business. But when he plunges headfirst down the lugelike Skeleton Run in St. Moritz, as he does from time to time, it is obvious that age, as well as convention, means little to him. He acquired Ulysse Nardin in 1983, when it was in bankruptcy and had only two remaining employees. Schnyder, who began working in Thailand for a Swiss consumer goods distributor at age 22 and later established successful watch components businesses in the Far East, now divides his time between Switzerland and Kuala Lumpur, Malaysia, where he resides with his wife, Chai, and their three children.

During the 1970s, Schnyder and a team of investors opened a dial and case factory in Thailand and offered Swiss watchmakers low-cost components to help them compete with Japanese rivals. However, when he purchased Ulysse Nardin, he was wagering that the future of the Swiss industry lay instead in prestige mechanical pieces.

Since then, Schnyder frequently has outmaneuvered better-known, better-funded competitors by building inventive complicated watches and using outside specialists to augment his company’s internal capabilities. His adoption of new escapements and materials represents another prescient demonstration of things to come.

Schnyder initially did not recognize the significance of Oechslin’s new escapement design, but his technical director, Pierre Gygax, did. At the time, Gygax was working on a radical tourbillon carousel movement for a watch that eliminated the dial and hands; the movement indicated hours and minutes by rotating its position in the case. As one of the first con­temporary timepieces to showcase its mechanical heart, the design provided a stage for Oechslin’s Dual Direct escapement. Ulysse Nardin’s executives dubbed the model the Freak, because its simplicity was embellished with a large helping of the bizarre. But the Freak was hampered by a critical flaw: The watch did not work.

Oechslin’s escapement was part of the problem. When made of steel in a size small enough for a wristwatch, the twin escape wheels were plagued by excessive inertia. Gygax, who was committed to Oechslin’s concept in part because the company already had made a significant financial investment in it, made a new version of the device out of aluminum. It worked, but only for a few hours before the soft metal collapsed under the strain.

Gygax then explored other alternatives. The Institute of Microtechnology, a branch of the University of Neuchâtel, and its affiliate CSEM (Centre Suisse d’Electronique et de Microtechnique SA) had created experimental watch parts from silicium, the core element of semiconductors. Silicium components were strong, hard, and light, but they also were impervious to watchmaking’s decorative finishing techniques. CSEM cut the parts out of wafers–similar to those used for computer chips–employing a process called photolithography, which involves chemicals that can erode precise patterns.

Ulysse Nardin refined this process to produce the tiny and finely detailed escape wheels, and then it contracted the production with CSEM, which is owned by a consortium of major watch brands that includes Rolex, Patek Philippe, and the Swatch Group. Ulysse Nardin claims its financial arrangement with CSEM was onerous. The brand had to pay for the development and construction of all silicium parts, regardless of whether they worked.

Silicium is a brittle material that is prone to breakage, especially when watchmakers use tweezers to manipulate the delicate twin escape wheels in the Dual Direct. Nevertheless, the material solved the inertia problem, and the Freak debuted in 2001.

Ulysse Nardin has worked with other materials that are new to the watch industry, partially because of the expense associated with silicium. The company’s second version of Oechslin’s escapement, called the Dual Ulysse, contained wheels made from a nickel-phosphorus compound that produced minimal friction and was easier to work with than silicium. The company then introduced the nickel-phosphorus escapement in the new high-frequency version of the Freak and in the new automatic Caliber 160. From a synthetic diamond material, Ulysse Nardin constructed both an escapement and the vital, coiled hairspring that suspends the balance wheel. The material performed exceptionally, but its exorbitant cost limited its use to a special-edition Freak Diamond Heart model. “All these materials are new in watchmaking,” notes Schnyder, “and they are appropriate for Swiss watches, because Switzerland is the birthplace for this kind of advanced microtechnology.”

Ultimately, Ulysse Nardin determined, silicium delivers the best overall performance, and so it negotiated a new manufacturing arrangement with CSEM that enables it to make all of its Dual Ulysse escapements with silicium parts.

While Ulysse Nardin was the front-runner in the use of silicium, Patek Philippe, Rolex, and the Swatch Group soon closed the gap. In 2005, Patek Philippe released an Advanced Research Annual Calendar limited edition (ref. 5250) containing the brand’s first silicium component: a conventional escape wheel. Last year the brand unveiled another Advanced Research Annual Calendar (ref. 5350), which contains a silicium hairspring that outperforms those made from conventional metal alloys. It should be noted that Oechslin first conceived of silicium hairsprings; however, he was unable to make the material stable at variable temperatures, a problem Patek Philippe solved with a special surface treatment.

Despite years of R&D dedicated to escapement designs and materials, the developments at Ulysse Nardin and other brands are still in their infancy. Of the few products that have been released, none has demonstrated any meaningful performance advantages over watches containing conventional materials. Movements incorporating silicium and other advanced materials are regulated to the same accuracy standards as other timepieces. And the promise of lubrication-free parts providing longer service intervals has yet to be proven. Still, Ulysse Nardin is moving forward with its silicium Dual Ulysse escapement, which regulates its new Caliber 160 automatic movement. “Making progress in watches is like chopping your way through a forest,” says Gygax. “We’ve only cut the first few trees.”