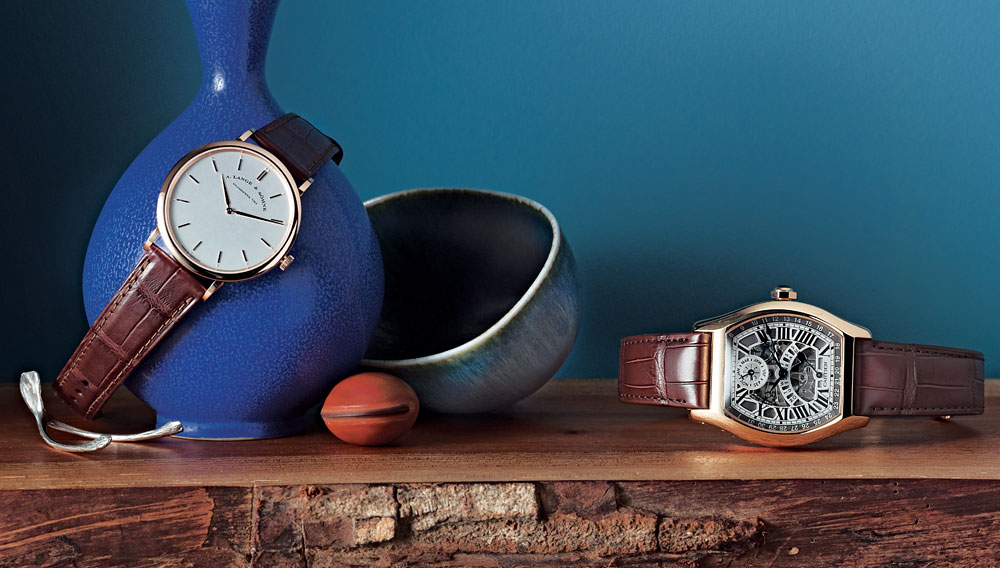 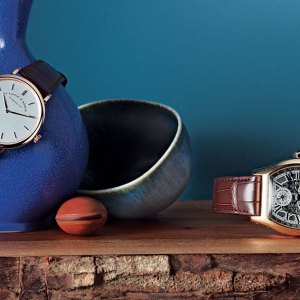 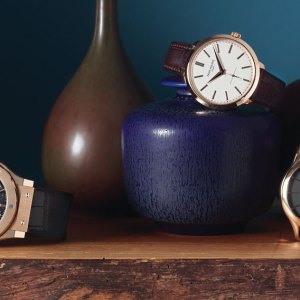 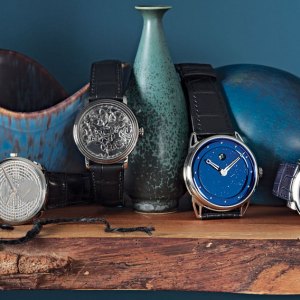 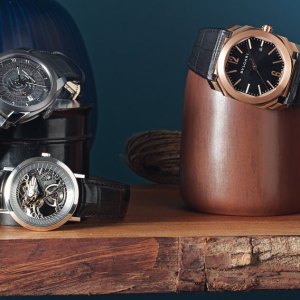 “If you erase the logo, every Swiss dress watch is the same,” complains Fabrizio Stigliani, who heads the watch-design department at Bulgari. “They are all round, with the same lugs and hands. I want to reinterpret the dress watch in a Bulgari way.” Stigliani’s sentiment, embodied in the striking Bulgari Octo, is shared by many collectors who, 10 years ago, when traditionally conservative Swiss watch design ventured into more avant-garde territory, had to rethink and adjust their wardrobes to cope with the oversize, sometimes radically innovative pieces they had begun to covet. In the time since, the aesthetic pendulum has begun to swing in the other direction, toward more classic styles and reasonable dimensions, yet many watch companies have retained their progressive mind-set and bold identities; rather than eschew the more daring statements of the past few years, watchmakers have instead integrated many of the same elements into packages that harmonize with today’s professional and evening attire. With more visual interest and horologic credibility than ever before, the dress watch is being redefined.

The modern skeleton watch offers a prime example of this transformation. Originally an engraved, rather baroque contrivance, the genre of timepiece has evolved into three distinct types, the broader and thinner examples of which are relevant to the dress-watch category. Though traditional skeletons, such as Blancpain’s Villeret 6633, utilize modern and interesting movements, they exist primarily to showcase a specialized mode of watchmaking artisanship. More and more, however, the swoops, swirls, and intricate engraving of this traditional style are giving way to the second type of skeleton, exemplified by the Piaget Altiplano Skeleton 40mm, which is characterized by a straighter, more modern, and aggressive cutaway pattern that is sometimes decorated with special coatings and finishes.

The third type, the open-works watch, is not a true skeleton; however, its partially or wholly absent dial reveals the beautiful movement finishing that most of us associate with skeleton watches, and this style of timepiece has become enormously popular. “I compare it to the open-kitchen-style restaurants that are popular now,” says Thierry Lamouroux, watch marketing director at Cartier, the first company to build a skeleton watch with a modern aesthetic. “People want to see what’s behind the scenes. It’s part of the pleasure.”

Just as timepieces that lay their mechanics bare have established a place on smartly dressed wrists, so have watches that take the opposite approach. Designers in Switzerland have lately revisited some of the cleanest, purest models from the 1950s and 1960s. With their comparatively svelte dimensions and absence of any but the simplest decorative elements, these watches directly challenge the more-is-more design precept of the last decade. The new Patek Philippe Calatrava 5123R, for instance, re-creates a particularly striking Calatrava design from the late 1950s, while the A. Lange & Söhne Saxonia Thin, which conceals an ornate, three-quarter plate movement beneath the soberest of dials, gives a subtle nod to the mid-20th-century aesthetic.

Collectors seeking technical precision are increasingly drawn to this emerging genre of streamlined watches. The simple two- or three-hand timepiece, after all, has long been the favored format for serious chronometers, whose form and function are devoted to accuracy. Moreover, this less-elaborate configuration lends itself readily to the alluring combination of broad diameter and minimal thickness. Laurent Ferrier, the Geneva-based boutique manufacturer, has employed considerable technical ingenuity to achieve these ideals of performance and proportion. An innovative escapement, for example, ensures energy-efficient timekeeping inside the company’s Galet Micro-Rotor, while a powerful yet compact winding system allows for the watch’s classic appearance and modest dimensions. Although De Bethune’s DB25L, with its flame-blue star dial, possesses an altogether different aesthetic, it follows a similar line of thought in its construction, which employs an equally inventive silicium-and-platinum oscillating balance disc.

The emphasis on elegance and engineering that characterizes these and other timepieces may have evolved as a result of consumer demands specific to certain markets, points out Greg Simonian, president of the California-based retailer Westime, but the watches’ beauty resonates with collectors around the globe. “My view is that the Swiss started making these pieces to appeal to Asian tastes in watch sizes,” he says. “But after that, it took on a life of its own. Creative pieces like the Classic [Fusion Ultra-thin] Skeleton from Hublot appeal to all kinds of people.”

Props courtesy the End of History (212.647.7598, theendofhistoryshop.blogspot.com), a Manhattan shop specializing in selections of mid-century art glass and Scandinavian ceramics from the 1920s to 1960s.