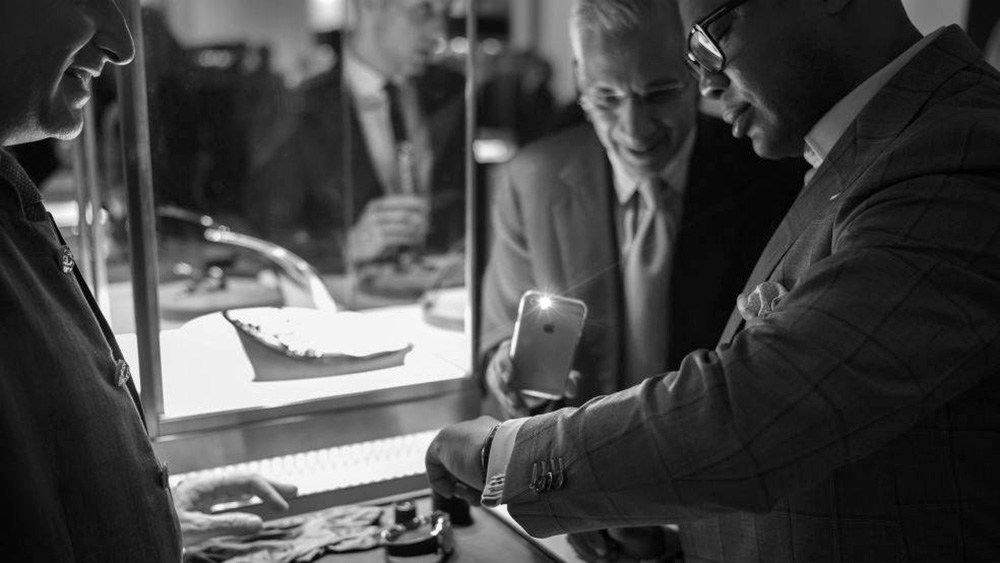 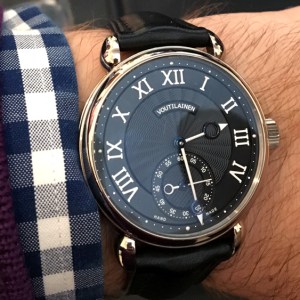 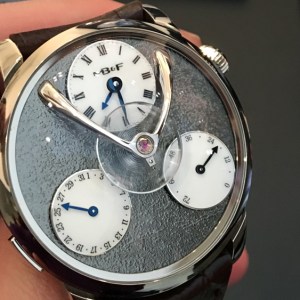 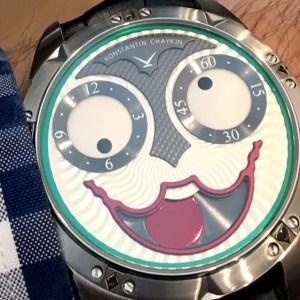 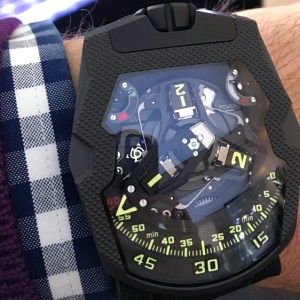 As the clocks moved back, amdist heavy London skies and streets concealed beneath fallen leaves, Salon QP opened to the public for its ninth year. The fine halls of the Saatchi Gallery once more lent their floors to more than fifty watch brands, a smattering of clockmakers, and other partner brands.

The event opened with a Thursday evening “modern black tie” event and ran to Saturday with a series of seminars, installations, and special events throughout. Nonetheless, the highlight of the show (as well should be) was the watches themselves. While some of the treats were laid down by larger and established brands such as Girard-Perregaux and A. Lange & Söhne, the sweet spot of the event was undoubtedly the independent offerings.

There were constant crowds around the stands for the independent heavyweights–brands like MB&F and URWERK. The initial creations from these brands blazed a trail in the early 2000’s, and today—while retaining the hallmarks of that original creativity—have the respect within the industry that places them shoulder-to-shoulder with centuries-old “Grandes Maisons.” 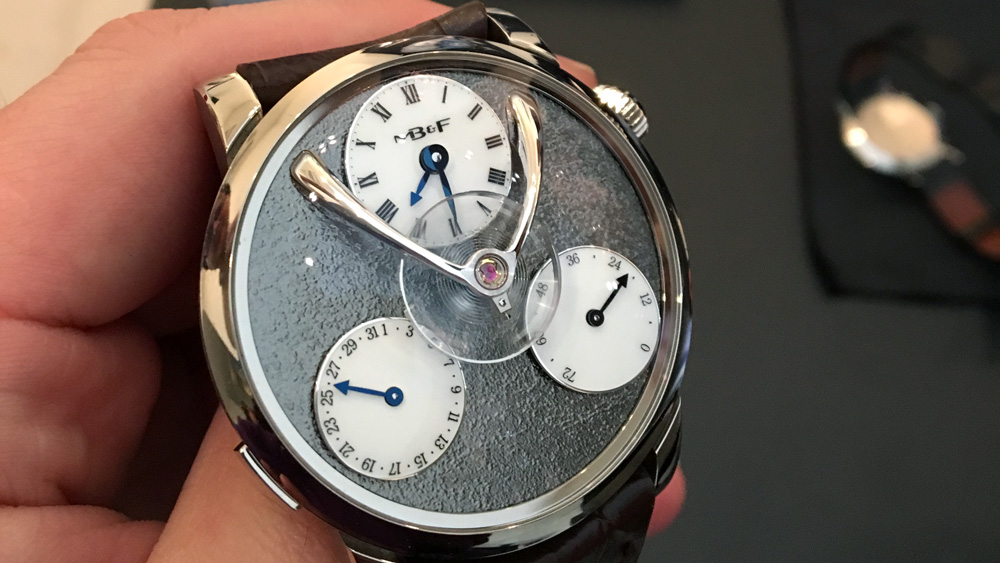 MB&F presented their newest watch, the Legacy Machine Split Escapement, along with the outrageous platinum and sapphire HM6-SV (complete with its retractable UV radiation shield for the flying tourbillon). URWERK presented their newest creation, the UR-105 CT Streamliner, with its sprung and hinged protective case that opens via a slider to reveal the full satellite mechanism beneath. Old favourites were on show too, such as the UR-210 which adds a winding efficiency indicator and retrograde mechanism to their core complications. 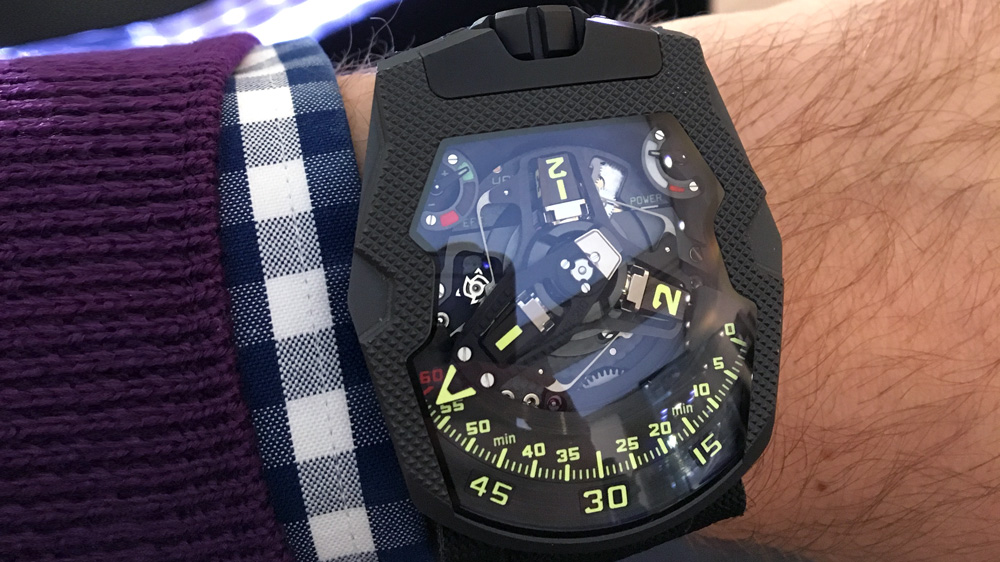 Quieter, more refined, but no-less-celebrated independent heavyweight, Kari Voutilainen had a host of spectacular watches, including the first public outing of the new 28 R12, a warm mulled wine of a watch on a blustery Autumn day. Kari’s dials always amaze, but the new Vingt8 GMT with guilloché dial has one of the most beautifully executed day/night GMT subdials ever created.

URWERK’s Felix Baumgartner and Kari Voutialinen are members of the AHCI (Académie Horlogère des Créateurs Indépendants), a group of independent watchmakers with a collective mission to celebrate and preserve traditional watchmaking crafts. The AHCI had a significant presence at Salon QP: their own gallery in fact, and a number of their other lesser-known stars were shining brilliantly as well. 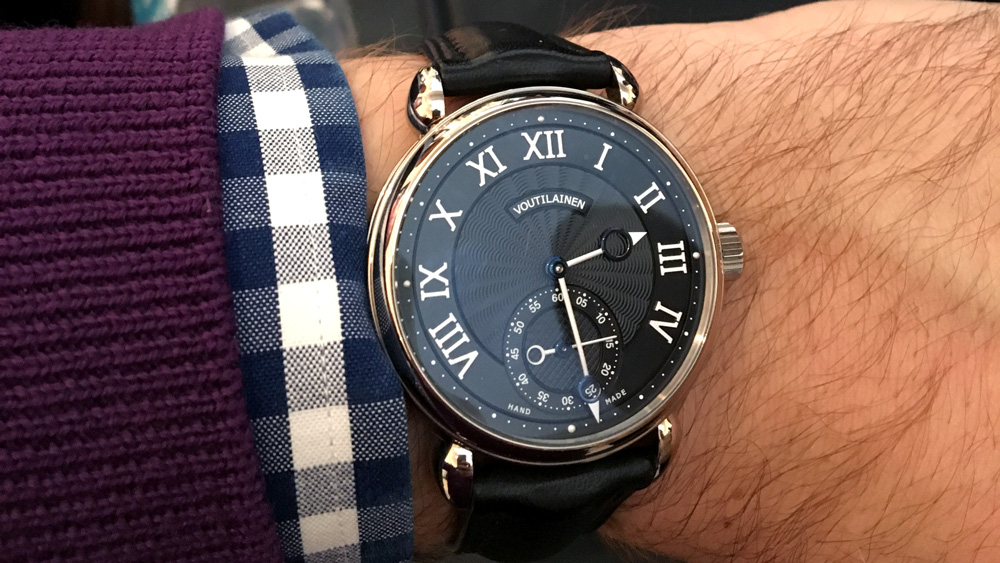 There was Konstantin Chaykin with his mesmerizing Cinema, a watch that provides a 12 frames/second animation via a magnified aperture and powered by an independent mainspring that is wound by the same crown as the timekeeping mainspring. Few people likely discovered this watch, considering it compteted for attention with his Joker. The face of the Joker tells the time with rotating eyes and the moon phase via his tongue. It’s a deceptively provocative watch because it’s execution and price are no joke. 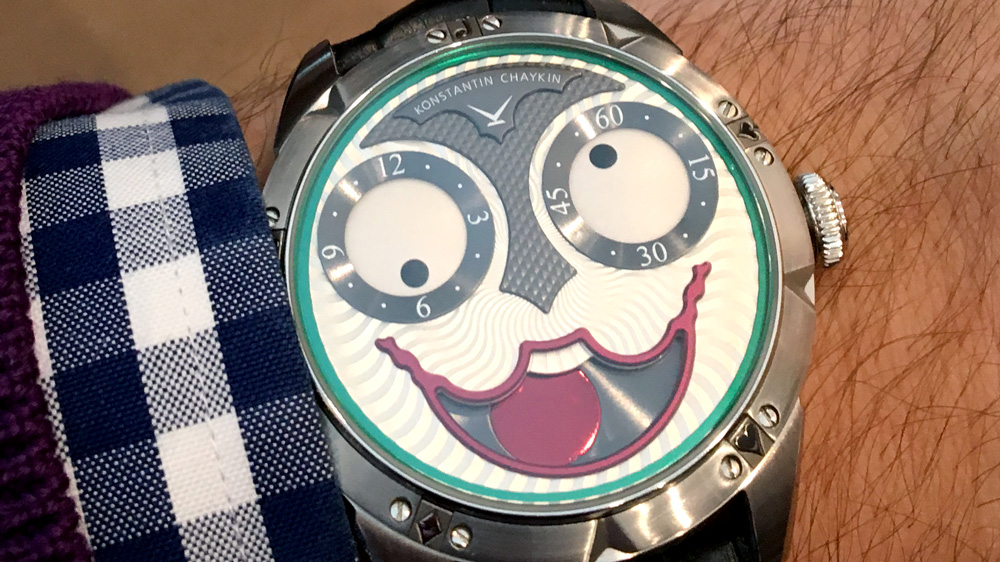 Lang & Heyne presented the Georg, which houses one of the most attractive quadrilateral movements in horology, the Caliber VIII. There were stands for Andreas Strehler, the master of complex gear ratios and finely crafted wheels, Christiaan van der Klaauw, the wizard of astronomical complications, and Svend Andersen, purveyor of elegant dials concealing R-rated automata.

For those seeking even more independent adventures, there were even more AHCI members present. Elsewhere, outside of AHCI, Maria and Richard Habring, of Habring2, king and queen of modulation, presented their waterproof Dubois-Depraz-based 5-minute repeater; and Rexhep Rexhepi, one of two impossibly young brothers behind Akrivia showcased their AK-06, which like many of their watches is an exercise in symmetry and finishing. 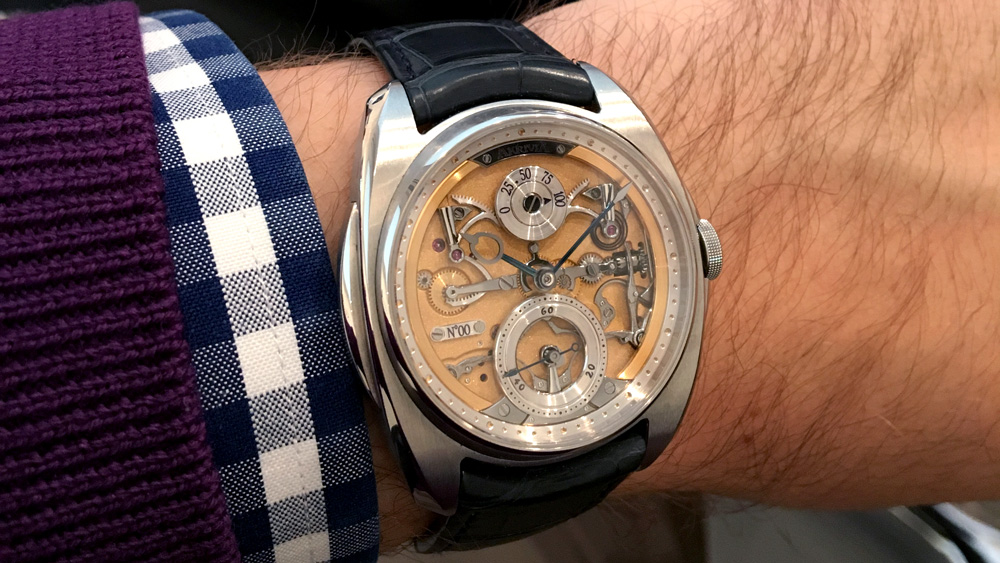 All in all, SalonQP was a goldmine for the inquisitive watch geek; an opportunity for even the most seasoned watch enthusiast to handle something they had never before seen. This relatively small event in a stone-carved corner of the Old World, might just become the place to make an annual pilgrimage to celebrate and admire everything great in independent horology.