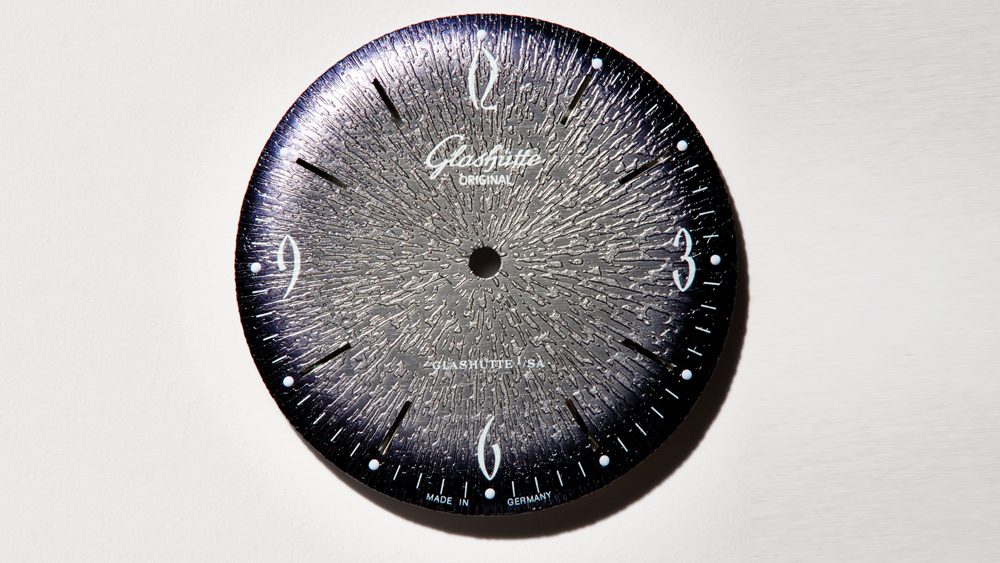 “In-house” is one of the most potent buzzwords in the watch industry, and it takes on special significance at German companies, many of which profess their pride in their independence from the Swiss manufacturing infrastructure. Dial making, however, is one area in which the “made in Germany” descriptor becomes exceedingly rare. So specialized is the craft, most of the Glashütte-born companies—even A. Lange & Söhne—usually turn to a Swiss partner for their production. Glashütte Original is an exception. Thanks to its acquisition of a facility in Pforzheim, now called the Glashütte Original Dial Manufactory, the company has exercised full control of its dial making since 2013.

The dial facility’s roots, however, run much deeper. Formerly known as the Th. Müller dial factory, it had a long history of crafting dials for German brands, including a long postwar relationship with the East German government-run VEB Glashütter Uhrenbetriebe (GUB) that was created from the remains of the German watch industry following World War II. The GUB was the forerunner to the modern Glashütte Original brand Examples of this supply relationship are the vibrant dials found in certain 1960s GUB Spezimatic watches, which Glashütte Original has since reproduced in the Sixties Iconic collections that were built from early 2015.

Following the facility’s acquisition, Glashütte Original relocated and thoroughly modernized it from stem to stern. It is now laden with every bit of equipment—both modern and antique—required for the dial-making process and has the capacity to produce dial blanks from raw metals and complete the multistep finishing process, much of which is done by hand. As is the case in most modern facilities, computerized machinery performs precise tasks such as the beveling of date windows and the addition of cutaways for a dial’s various subdials. Once the metalwork is complete, human hands apply finishes, like a traditional sunburst created by rotating brass brushes and a trained specialist visually inspects lacquer and galvanic coatings to ensure top-quality results. Pad printing at Glashütte Original is capable of producing delicate and ultraprecise details as a final step.

The iconic Sixties line was for Glashütte Original the ultimate opportunity to highlight the skill set residing in Pforzheim. In two launches, five variations were offered, each of which featured handcrafted dégradé (gradated color) lacquer dials with curved edges. This curvature adds a level of intricacy to the process, which includes applying layer after layer of lacquer over a base galvanic coating. Once the desired color is achieved, a final spray of black creates the gradation effect that washes over the perimeter before the dials are fired to set the color permanently. Rather than using applied indices, Glashütte Original took the unique approach of cutting grooves into the dial for its indices alongside the painted numerals at 3, 6, 9, and 12.

There is a level of perfect imperfection to be seen from one Sixties Iconic dial to the next that does not always translate in photography, especially in the case of the gray variant. This hero piece of the collection takes things a step further: Prior to receiving its galvanic nickel plating, the dial blank is stamped via a 60-ton press from a die with an intricate guilloche pattern. Glashütte Original holds a number of these dies in its archives in Pforzheim alongside a number of old-stock dials from which its design and development team continues to draw influence.

By adopting this level of vertical integration, as well as adhering to the strictest standards of quality, Glashütte Original continues to distinguish itself among a very accomplished set of German peers. Sometimes underestimated, the brand offers features like its dial-making capability that only add to the satisfaction of its in-the-know watch owners (Glashütte Original, 866.203.8699).