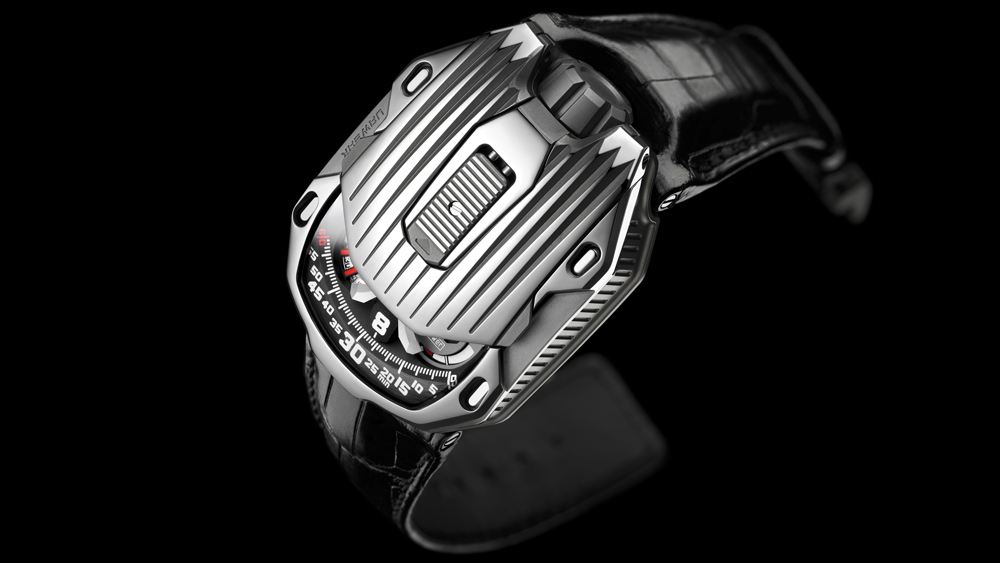 When Felix Baumgartner and his brother Thomas founded Urwerk in 1997 with a Swiss artist named Martin Frei, they drew upon his design skills for their first wristwatch. Frei was an unconventional choice, having neither training in industrial design nor a background in the watch business. The closest he came to horological experience was as a student, when he created a series of sculptures with surreally elongated components of cuckoo clocks.

But the Baumgartner brothers planned to produce unconventional timepieces, and Frei had no industry preconceptions to get in the way of their radical vision. “Art school gave me a totally different approach to design,” he recalls. “I look at an object from as many sides as possible.” From his point of view, a wristwatch can be philosophical and sculptural while also being functional.

From his very first encounter with the Baumgartners, Frei approached wristwatch design on all three fronts, attracted by a mechanism that he found to be conceptually provocative and visually beguiling. (The Urwerk mechanism was inspired by a 17th-century Campanus Night Clock with wandering hours, which indicates the latter digitally with light shining through the hour numeral apertures that sweep across an arc. The watch was being restored by the Baumgartners’ father.) “If you have an unusual time indication, you experience time in a different way,” says Frei. With the wandering hour indication—which the Baumgartners reengineered to fit on a wrist—Frei was able to reframe the passage of time as a system in which “one hour is being offered to you while the others are stored away for later use.” He also realized that “if you have the time indication on one side and don’t need the whole watch, you can start to play with the architecture.” The aesthetic possibilities for the Urwerk mechanism were virtually limitless.

When the first Urwerk offering—the now-famous UR-101—was unveiled in 1997, collectors had difficulty understanding it and Urwerk struggled to remain solvent. Frei, however, was already pondering new dimensions for the brand to explore. “What can a watch indicate about itself?” he asked the Baumgartners, conjuring a future in which watches would attain a sort of mechanical introspection.

The automobile provided a preliminary blueprint, since cars are designed to monitor their own operation. By analogy, Frei and the Baumgartners decided that the watch should have a control board with a second indication; an “oil change” meter to alert the owner when his timepiece needed servicing; and a fine-tuning screw to adjust the rate of the watch. The automotive inspiration was apt, given that 2003’s UR-103 was designed to be readable while driving. It also looked a bit like a sports car, with a sloping front end and thick windshield that codified Urwerk’s distinctively asymmetrical look.

Another idea emerged from those early conversations about novel watch indications that ultimately led Urwerk to realize a timepiece with a fully philosophical mechanism. “Felix suggested that we could indicate the amplitude of the movement,” says Frei. With that measurement, the watch could tell whether it was keeping good time. “We attempted to do it mechanically,” Frei says. “We never managed. Then we realized we could use electronics.”

Released in 2013—by which time Thomas had not been with the company for nearly a decade—the EMC was a marvel of miniaturization. (At the core was the kind of bench-top timing instrument you’d find in a watch repair shop, radically scaled down and charged with a hand-cranked dynamo.) According to Frei, the long development cycle was not only due to technological challenges. “One thing I’ve taken from art is that it’s important to be contemporary,” he says. “It made sense to use electronics after the first smart watches came out. By having mechanics and also electronics, the watch could reflect on the current situation.”

Even as Frei has pursued new conceptual ground, he has not lost sight of his sculptural roots. Each new watch is a new opportunity to play with the architecture of the case and to highlight different aspects of Baumgartner’s movements.

The opportunity has perhaps been greatest with Urwerk’s new watches for women, because Urwerk’s design history has been resolutely masculine. “If you create the coolest possible watch for yourself, then it becomes a manly watch,” Frei says. “I was making watches asymmetrical because our indication would otherwise be very ornamental.” In fact, Frei says, the slender arms of Baumgartner’s wandering hour mechanism look like nothing so much as the petals of a flower. By making watches for women, including the Lotus and the UR-106 Flower Power, he could finally, he says, “just show it the way it actually looks.”

Not that Frei has given up on masculinity. On the contrary, Urwerk’s latest watch for men, the UR-T8, is massive in scale, with a texture reminiscent of reptile skin. Moreover, the case flips over on the wrist, a feature that Frei says was functionally inspired by the classic Reverso, but aesthetically draws on his passion for the Transformers.

Frei considers the interactivity to be a key sculptural attribute of the T8, and has attended to the sense of touch as keenly as visual appearance. “You can not only see the mechanical world—you can experience it with your fingers,” he says.

That makes the T8 a “fetish object” in his judgment. But, characteristic of Frei’s many-sided approach to design, the fetishistic quality has a philosophical undergirding. “When you wear a machine like this and interact with it, you understand a sharp contrast between the mechanical and your flesh and bone,” he says. The device on your wrist does not just tell you the time. It is a ticking reminder of your humanity.