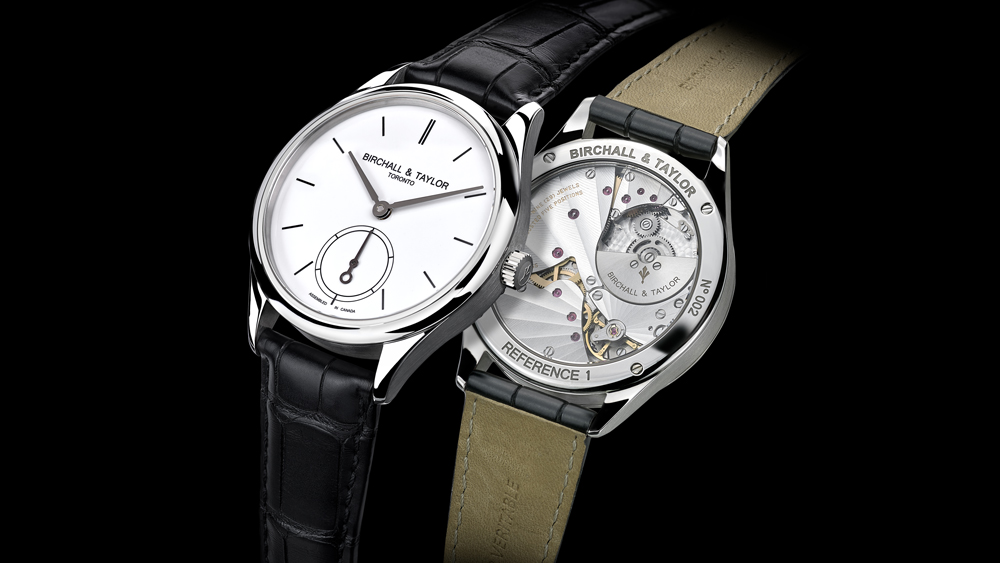 Reference 1, the first offering from newly minted independent brand Birchall & Taylor, is making waves among collectors as one of the nicest “Swiss” watches they have ever seen. That the dial prominently displays the word “Toronto” just under the logo at 12 o’clock doesn’t seem to detract from the description. The Reference 1 is Swiss in both style and substance; it has a movement made by Swiss boutique movement maker Vaucher as well as a lush grand-feu dial made by Donzé Cadrans of Le Locle, one of Switzerland’s elite dial makers. The watch was assembled in Toronto, however—hence the tag on the dial, along with the words “Assembled in Canada” in smaller print just below the subdial at six o’clock.

The reference to provenance goes beyond legalities—a watch, in order to be named “Swiss Made,” must be assembled in Switzerland—to being a matter of pride for Canadians Charles Birchall and Brad Taylor. Both are Toronto natives who met in 2012 while attending the Korpela and Hofs Watchmaking school in Le Locle, Switzerland. Together they made up one half of a class of four students who studied directly under Henrik Korpela, a former instructor at WOSTEP, a leading international watch school in Switzerland specializing in complications.

“Henrik designed the curriculum to match his ideals, with a very strong focus on traditional watchmaking techniques,” says Birchall. “We had the freedom to choose some of our own projects and to use the machinery and workshop whenever we had time, which was quite often as we were living in an isolated town in rural Switzerland.”

After completing the 4,500-hour program, Birchall went to work for independent watchmaker Roger Smith on the Isle of Man. Taylor, meanwhile, returned to Toronto where he earned certifications from Patek Philippe and Hublot. The two kept in touch, and when Birchall returned to Toronto two years later, they discussed starting their own workshop in their hometown. “We met regularly and exchanged ideas about what our ideal watch would look like,” says Birchall. “We couldn’t hold back our passion and desire to create something that really represented our ideals of watchmaking, and we felt like we had to give it our best shot.”

They rented a small space in what used to be a peanut factory and piled all of their tools and watchmaking benches into what became an open-door workshop for collectors and enthusiasts. A local businessman and passionate watch collector became interested in their project and committed to purchasing the first piece in addition to helping them start the business. “With a growing list of preorders, we were able to source some funding from our family and friends, and we made a trip to our old stomping grounds in Le Locle to meet with old contacts and manufacturers,” says Birchall.

The first stop was Vaucher Fleurier, which has made movements for the likes of Parmigiani Fleurier, Hermès, Richard Mille, and Fabergé. “After our meeting, we drove back to our old school’s workshop and disassembled our prospective movement [the Vaucher 5104, a chronometer rated movement with a micro-rotor],” says Birchall. We felt very confident that it represented our quality standard.” Next, they approached Donzé Cadrans, a dial maker specializing in grand feu enameling, a tricky endeavor with a high failure rate. The company also supplies dials to the likes of Patek Philippe and Cartier.

The result is the Reference 1 ($9,500 CAD or approximately $7,260 at current exchange), a simple three-hand timepiece including a small seconds dial at six o’clock and a 38-mm-wide and nine-mm-thick stainless-steel case, with a hand-fired white grand-feu enamel dial. It will be produced in a limited, but not numbered, series. “Our plan is to grow slowly and only produce as many watches as we can while still meeting our standard of quality,” says Birchall, who says the pair’s long-term ambition is to create their own movement. “It’s a 10-year goal,” he says. “Because of the intensive costs and time commitment, we have to organically reach that point . . . but knowing us, we may do it before it makes perfect business sense.”