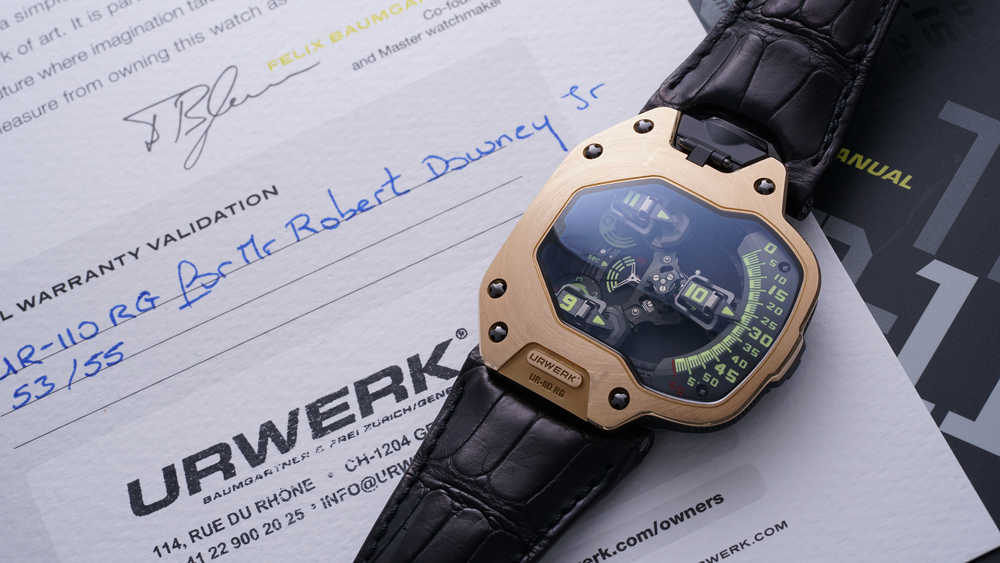 A superhero watch is hitting the auction block at Phillips. Robert Downey Jr.’s Urwerk UR-110RG from Spider-Man: Homecoming will be available for purchase at the auction house’s big upcoming sale, Geneva Watch Auction: Seven. The watch was personally selected by the actor to be worn by his character, Tony Stark a.k.a. Iron Man, in the Marvel Comics blockbuster. The UR-110RG was more than just an accessory—it was actually used by Iron Man to combat evil forces.

But the superhero watch almost missed its moment in the Hollywood spotlight. The independent watchmaker, mostly known to watch enthusiasts and serious collectors, initially turned down the studio when they came calling about the UR-110RG. When Downey Jr.—who is a well-known mechanical watch collector—tasked the costume department with sourcing the very limited timepiece, Urwerk declined to participate thinking they had received a prank call. But when the studio team persisted and stressed that the watch had been specially requested by Downey Jr., Urwerk quickly made an about-face. The rose gold timepiece (to compliment Iron Man’s suit) was promptly flown from Geneva to Los Angeles and hand-delivered to set.

The UR-110RG was a perfect fit for his Iron Man character—an eccentric billionaire business magnate and inventor turned superhero. Crafted in lightweight titanium with an asymmetrical 18-karat rose gold bezel, the watch presented a radical new way of telling time when it was first launched seven years ago. It uses a rotating cube and orbiting satellite complications to tell the time instead of hands and markers. Time is displayed on the right side and a “control board” indicates day and night, a small seconds subdial, and an “oil change” indicator that alerts the wearer when the watch needs to be serviced. The back of the watch reveals the automatic winding system, which is regulated by dual turbines. The self-winding UR-9.01 movement allows for 39 hours of power reserve.

The watch, estimated at 50,000 to 100,000 CHF ($52,268 to $104,536 at current exchange) will be up for auction on May 12th at Hotel La Reserve in Geneva and will be offered in its original box and papers with a complimentary service to the watch from Urwerk. Downey Jr. and Urwerk will be donating proceeds from the sale to Manusodany, a non-profit that funds development projects for the disadvantaged in Haiti. Prior to the auction, the watch will be on view stateside at The Apartment by The Line in Los Angeles from April 11 to April 13 and Phillips New York Gallery from April 26 to April 30.