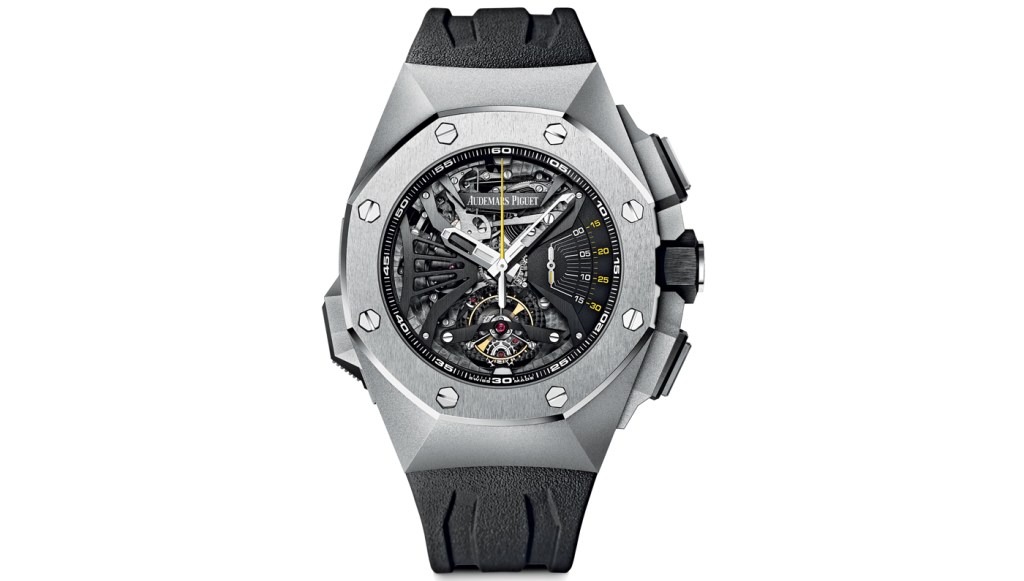 Audemars Piguet’s past resonates in its current generation of minute repeaters.

In 2006, eight master watchmakers and engineers at Audemars Piguet sat around a table in their Vallée de Joux headquarters with a selection of historical Audemars Piguet minute repeaters, some dating back to just a few years after the brand’s founding in the late 19th century. Their task was to identify

the sound that would set the future tone—literally and figuratively—for the company’s acoustic-watch program. “They finally focused on one specific piece from 1924 that possessed the most beautiful sound,” says Claudio Cavaliere, an Audemars Piguet global brand ambassador who formerly served as head of products. “It wasn’t a question of volume; it was a question of purity. We wanted to recapture the sound of that minute repeater and also improve it.”

The following nine years of research and development yielded the Royal Oak Concept Supersonnerie ($597,400), which was released commercially in January for an expected production of about 50 examples over the next two years. The Supersonnerie is not really a sonnerie in the strictest sense of the word, but rather a tourbillon minute-repeater chronograph with a remarkably loud and clear chime. Members of the technical team are fond of activating the chime across the room from listeners, who can still hear it distinctly.

Audemars Piguet has always relied on the ears of its watchmakers to properly tune its acoustic watches. Still, to identify the factors contributing to the quality of its heritage pieces, the company employed cutting-edge technology. “We spent about three years in research just to understand the sound in itself, the transmission of the sound, and also the way the human ear analyzes the sound,” explains Lucas Raggi, head of research and development. “Technology was just used to set targets. The materials used are still the same, as is the job the watchmaker is doing.”

After isolating the ideal tones, harmonics, and pitch interval between hour and minute chimes, Audemars Piguet’s development team came up with a method for propagating the sound. Suspended underneath the baseplate, the gongs are anchored to a metallic, copper-alloy soundboard that clearly broadcasts the reverberation, even when the case is sealed with water-resistant gaskets. In addition, the company has refined the manufacturing of its gongs, adding a silent shock-absorption system to the traditional anchor regulator—obviating the need for a complex centrifugal governor to control the speed of the strike. “We have built both movement and case as an instrument,” says Cavaliere. “But the movement can be easily adapted to any case design we make.”