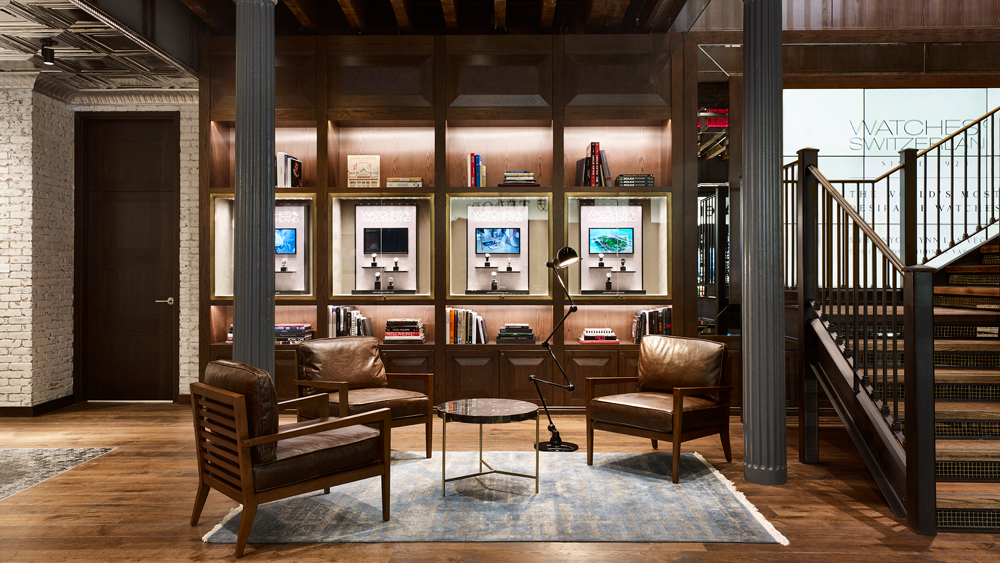 Watches of Switzerland, the largest watch retailer in the U.K., has hopped the pond to dial in on the U.S. market. With a store inside the Wynn in Las Vegas already in operation as of last year, it’s second boutique opened today on 60 Greene Street in Soho, meaning watch enthusiasts no longer have to trek up to Fifth Avenue and Madison Avenue in search for the latest timepieces. In keeping with the Downtown New York vibe, the 8,000-square-foot boutique is not only home to the world’s top timepieces from brands like Patek Philippe, Rolex, and Cartier (all three of which operate shop-in-shops in the boutique), but also a lounge space that will include a specialized bar, an art gallery, and a special section devoted to vintage timepieces.

The creators of New York City’s artisanal cocktail bar Death & Co. were tapped to create a specialized cocktail menu for the bar located on the lower street level, that is said to draw inspiration from the world of horology. The company also consulted on everything from the glassware to the lighting and seating. A Death & Co. bartender will be on-hand every week, Thursday through Saturday, serving up spirits to clients and walk-ins alike.

While sipping on cocktails from the bar, guests can also kick back in the lounge space and peruse the library of horology-dedicated books. The gallery space, also on the lower level, was conceived in partnership with the New York-based art foundation Aperture, which will curate a rotating selection of works for sale from its limited-edition print program. Artists like Bill Armstrong, Sara Vanderbeek, and Penelope Umbrico, to name a few, will be among the artists shown this month. The art selection will change every four months and Aperture will bring select artists in-store for special talks in support of the exhibitions. To top it off, Watches of Switzerland has also partnered with Analog/Shift to offer a curated selection of vintage timepieces and is planning to partner with watch collecting communities like Red Bar and Watchionista on special in-store events.

“We were puzzled as to why there were not many watch retailers in Soho given the luxury environment,” says Watches of Switzerland CEO Brian Duffy. “There’s been no big developments of flagship stores that appeal to a younger audience and that’s very much what we’re about. We’ve really adapted the store for the environment.”

Watches of Switzerland owns 16 boutiques in the U.K.—including what they refer to as their “golden triangle” boutiques on Regent, Oxford, and Knightsbridge streets in London, which offer a more buttoned-up approach to its European clientele. They own the 126-year-old Goldsmiths jewelry business in the U.K. and Mappin & Webb, the 245-year-old jeweler to the Royal family. It’s next crown jewel? A 6,000-square-foot boutique in Hudson Yards, slated to open in March of next year.