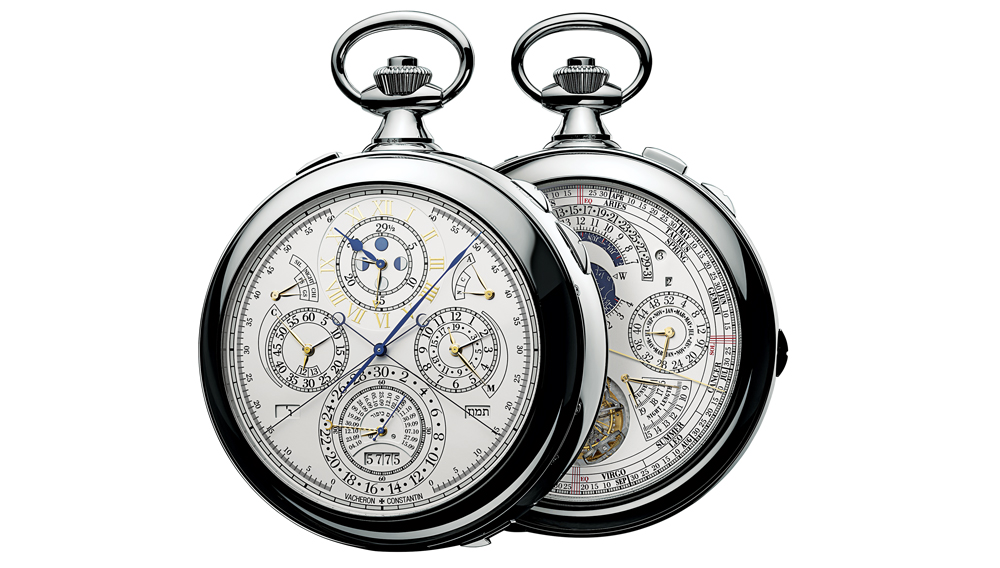 Vacheron Constantin accepts a private commission that results in the world’s most complex watch.

As he began to present a status update to his client, Dominique ­Bernaz—head of Vacheron Constantin’s Ateliers Cabinotiers custom-watch ­program—gradually realized that his watchmakers had been keeping a few secrets even from him. The client (who prefers to remain anonymous for the time being) had commissioned Vacheron Constantin to build the most complicated watch of the 21st century, at a rumored cost of $8 million. Upon accepting the commission, the company commenced work on the eight-year project, which initially called for 36 complications. “After a little confusion, I had to tell the client that many of the complications he was seeing [in the presentation] I didn’t know about,” confesses Bernaz. “In the end, we ended up with 57 complications.”

Measuring 98 mm in diameter, the clock watch—Reference 57260, which was unofficially code-named “Tivoli”—is astonishing not just for the number of its complications but also for the fact that all of the design, assembly, and finishing required to complete it was done by a team of only three people. “We were very lucky in that this was the team that created Tour d’Ile,” says Bernaz, referring to the highly complicated wristwatch produced in 2005 for the brand’s 250th anniversary by team leader Jean-Luc Perrin and brothers Micke and Yannick Pintus. “They all moved their families from the Vallée de Joux to Geneva for this project.”

Despite the new timepiece’s complexity, its movement’s construction is relatively conventional, with a main plate supporting the triple-axis tourbillon escapement, sonnerie functions, and four additional plates: two for the calendar functions, one for the astronomic functions, and one for the chronograph. The genius of the piece, however, lies in the imaginative way in which the functions are conceived. The alarm increases in volume as it rings, and the chronograph is displayed by means of two retrograde hands that account for time by returning to the beginning of the scale. The Hebrew ­calendar—another watchmaking first—employs a system of cams and gears to follow its demanding 19-year astronomic cycle.

Comparisons will inevitably be drawn between the Reference 57260 and Patek Philippe’s Calibre 89, the design Vacheron Constantin seeks to depose as the world’s most complicated watch. Although Vacheron Constantin uses slightly more liberal standards for counting complications, the Reference 57260 has certainly captured the title. Still, the success of the Reference 57260—as with any horological milestone—rests on the achievements of pioneering watchmakers of the past. Advances in computer-aided design, milling, and photo­lithography enabled Bernaz’s team to pack more than 1,000 more parts than the Calibre 89 contains, in a case only slightly larger. In fact, Bernaz describes the production process as “two-thirds behind a computer, one-third at the bench.” The watch owes its imaginative configuration, however, entirely to the watchmaking team, whose members have served notice that Vacheron Constantin—a company which was just outside the limelight of mechanical watchmaking for much of the late 20th ­century—is once again a force to be reckoned with.