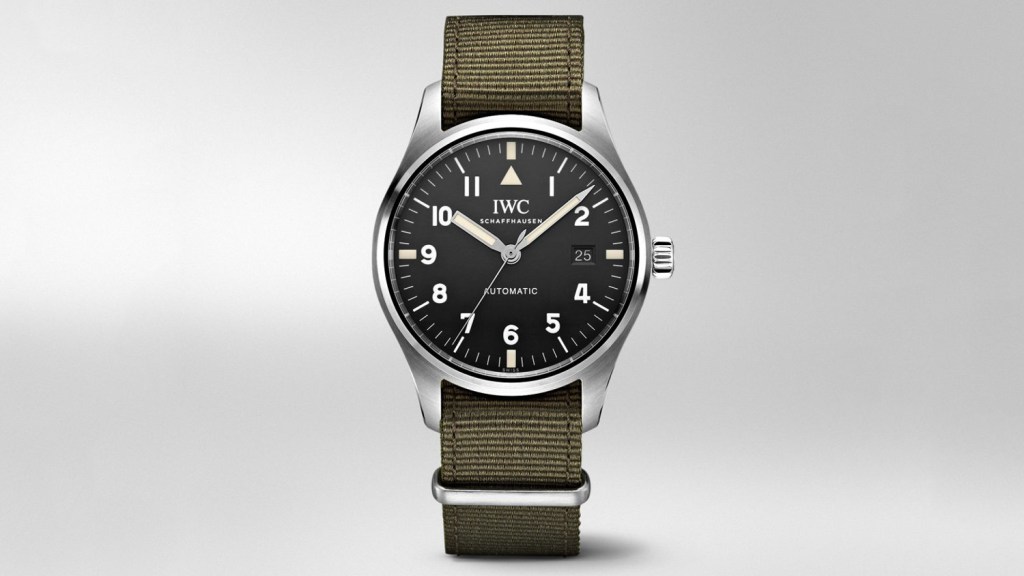 How does IWC pay respect to one of its most historically respected timepieces in modern times? By keeping the original character of the watch and simply modernizing the case size, water resistance, and manufacturing materials. The Mark VIII “Tribute to Mark XI” ($4,150) is an exceptional re-creation of a timepiece that collectors have such a degree of reverence for that it’s become sacrosanct, and any attempt to re-create such an icon could be considered blasphemy. Luckily, IWC stayed faithful to the legendary roots of the Mark XI.

IWC’s Mark XI watch is perhaps one of the most respected military watches of them all, having dutifully served pilots and navigators enlisted in forces under the U.K.’s Ministry of Defense. Everything about the universally lauded Mark XI is superlative. It was the most accurate watch in an era when most watches didn’t even hack—a function that makes it easier to synchronize time, as the seconds hand stops when the crown is pulled out. It entered service in 1948 after a Ministry of Defense procurement order—and a tall order at that—was fulfilled by IWC’s engineers. The Royal Air Force (RAF) needed a reliable watch for its navigators to use for dead reckoning, a form of navigation unaided by computers. The Mark XI was equipped with a soft iron cage to protect the hacking movement from radiation as well as a stainless-steel case impervious to water. It adorned the wrists of navigators serving in the RAF, FAA (Fleet Air Arm), RAAF (Royal Australian Air Force), and RNZAF (Royal New Zealand Air Force) at a time when analog instruments were crucial to mission success.

Military watches rarely exude elegance; instead, they draw on a rich history of service to earn the status of horological icon. But with the Tribute to Mark XI, IWC managed to hit all the right notes of mid-century utilitarianism. Strapping it on feels like it should precede climbing into the cockpit of a Supermarine Spitfire or Hawker Hunter.

Rounding out the honesty of this piece are creamy, aged lume plots calling to mind the original military icon. A subtle date at three o’clock uses the same 1948 font and blends nicely into the dial, with equally subdued marks running around the circumference of the dial. A baton-style hour hand is employed rather than the traditional flieger hands found on most modern IWC pilot’s watches. The supplied olive nylon strap rounds out the military theme and makes it believable that this watch is a piece of equipment issued at RAF Waddington rather than acquired at an IWC boutique.