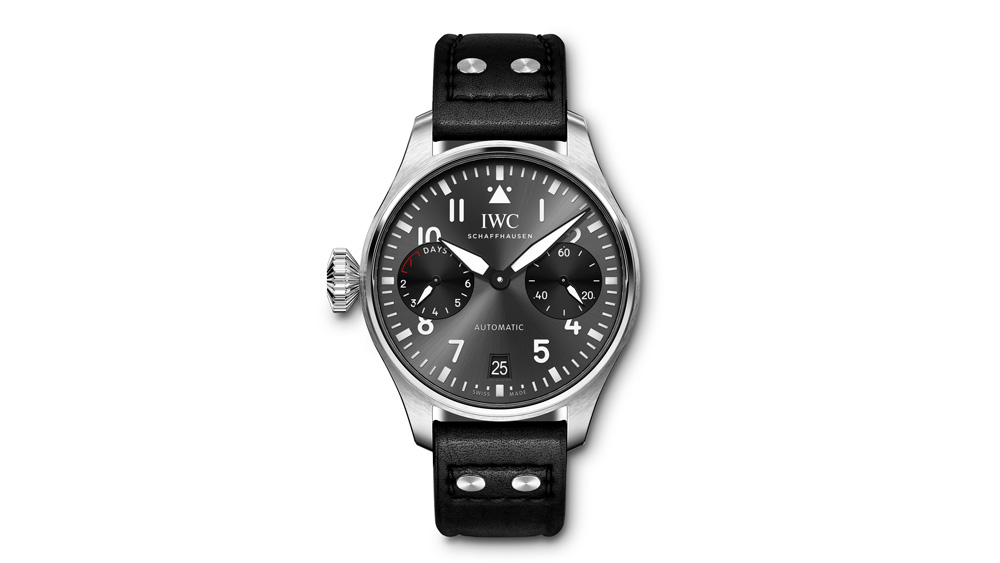 For the roughly 10 percent of people who are left-handed, wearing a mechanical watch is an ergonomic challenge. Worn on the right wrist, with a crown located in the standard position at 3 o’clock, the model can be tough to manipulate.

But for pilots, who, according to anecdotal accounts, are disproportionately left-handed—some estimates place the figure as high as 40 percent—wearing a watch designed for a right-handed individual within the tight confines of a cockpit is especially difficult.

Which is why IWC Schaffhausen has, for the first time in its history, produced a model designed with southpaws in mind: the Big Pilot’s Watch Edition “Right-Hander,” a 46.2 mm style featuring a conical-shaped crown on the left side of the case, at 9 o’clock.

The brand drew on its authentic history as a producer of pilot’s watches to create the special edition, borrowing its generous proportions from a historic 1940s movement, the Big Pilot’s Watch Calibre 52 TSC. (The IWC Museum in Schaffhausen, a medieval Swiss city located about an hour’s drive north of Zurich, is rife with early 20th-century aviator models designed for British and German pilots.)

Encased in stainless steel, with a soft-iron inner case that shields the IWC-manufactured 52010 calibre from magnetic fields, the Big Pilot’s Watch Edition “Right-Hander” features a slate-gray dial with luminescent indices, and comes on a black calfskin leather strap. The model is available at IWC boutiques and authorized retailers starting this month, in a limited edition of 250 pieces, each priced at $14,200.

The Swiss-German brand isn’t alone in creating watches for the left-handed population; Breitling, Panerai and Tudor have all marketed sinistral models in recent years. In 2016, Tudor recalled its mid-century heyday producing customized “lefty” watches for the French Navy when it updated its signature Pelagos dive watch with a left-hand version, the Pelagos LHD (for Left Hand Drive).