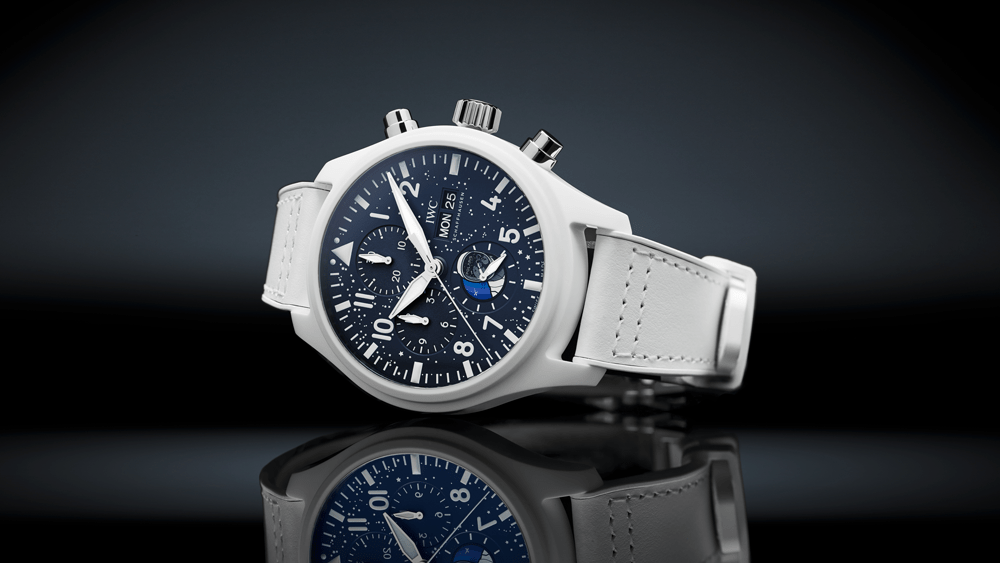 The IWC Pilot’s Watch Chronograph Edition “Polaris Dawn” (Ref. IW389111) will travel to space in March, on the Polaris Dawn space mission, a partnership with SpaceX, the spacecraft manufacturer and launch provider founded by Elon Musk. The goal is to conduct scientific research and to further understand the effects on human health during future long-duration space flights. Each of the four chronographs to be worn by crew members on the mission will be engraved with their names. They include Commander Jared Isaacman, CEO of Shift4 Payments and a former jet fighter pilot; retired United States Air Force Lieutenant Colonel Scott “Kidd” Poteet; and SpaceX lead space operations engineers Sarah Gillis and Anna Menon. After returning to Earth, the watches will be auctioned to raise funds for St. Jude Children’s Research Hospital, which develops treatments for childhood cancer and other pediatric diseases.

“This is a five-day mission with four pillars as our objectives,” explains Scott Poteet. “The first is EVA (extravehicular activity), essentially a space walk, the first commercial one, to test a SpaceX-designed EVA suit. Historically, it’s taken billions of dollars and years and years of development to create very expensive suits. The vision that SpaceX has is that we will eventually colonize the lunar surface and also get to Mars, and that’s going to involve hundreds and thousands of humans that will need space suits to be able to operate and function in a vacuum environment. So they are developing a suit that we will test out for the first time.”

The second pillar is to achieve the highest altitude for Earth orbit. “Back in 1966, NASA’s Gemini 11 set an altitude record of 1,368 kilometers. Our objective is to exceed that, to at least 1,400 kilometers,” says Poteet. The third pillar is science and research, which involves understanding the effects of space flight and space radiation on human health, which will be useful for future long-duration space flights.

“In general, it’s about expanding space exploration,” says Poteet. “It’s human curiosity to find out what’s out there amongst the stars. What we’re starting to see in the space industry is this tremendous uptick of technology,  advancements and innovations.”

Throughout the process, the crew will be using the Pilot’s Watch Chronograph Edition “Polaris Dawn” to time various functions and help them keep track of time in space. The 44.5 mm case is made of bright white ceramic, a color achieved through a complex manufacturing process in which zirconium oxide is mixed with other metallic oxides in a precisely defined ratio and then heated at high temperatures. The dark blue lacquered dial is printed with stars and the mission logo, and the titanium caseback of each is engraved with the name of one of the four crew members.

“Scott and I both fly fighter jets, so there are certain time gates the watch helps us to track,” says Polaris philanthropy director John  Baum. “After so many seconds, you should be reading a certain number of RPMs, and so many degrees for the engine temperature and things like that. We definitely use our watches for that because it’s really the best way to make sure the health of the jets are there.”