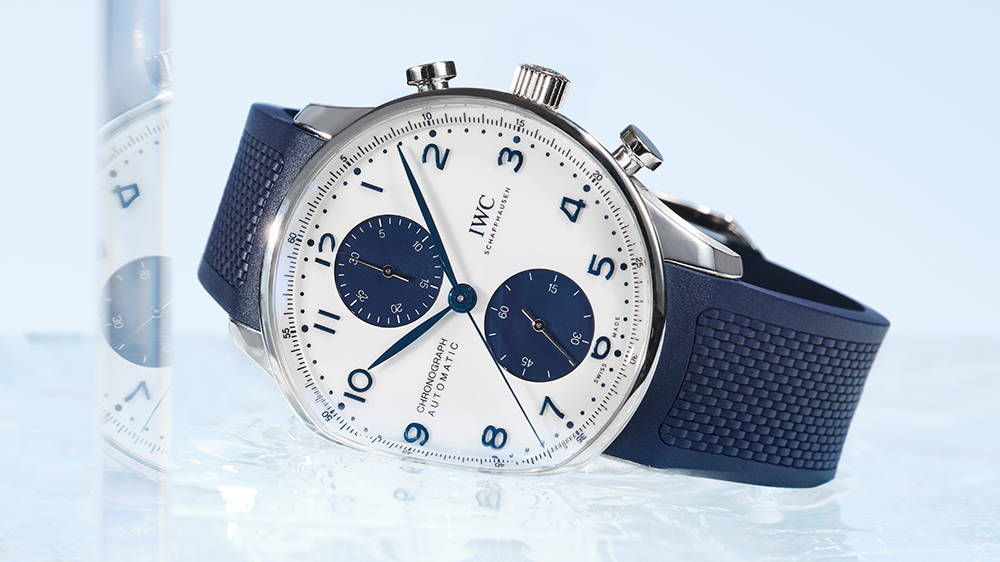 Who says pandas can’t be blue?

IWC, the Swiss watch brand that’s been making beloved aviation and marine timepieces since the 1860s, just dropped two new editions of its Portugieser watches that subtly and elegantly update the concept of the panda dial. (The two dark sub-dials on the new Portugieser Automatic and Portugieser Chronograph, above, set against creamy white faces, resemble the eyes of the Chinese bear species at a glance, although they are set vertically in the chronograph version.)

The blue-and-white panda dials offered on both new references are a nod to the company’s maritime heritage. They maintain the stylistic earmarks of the collection: Large, clean dials punctuated by prominent Arabic numerals and balanced, informative sub-dials. The subdials on the $13,100 Portugieser Automatic feature running seconds at 9 o’clock and a 7-day power reserve indicator at 3 o’clock, while the $8,400 Portugieser Chronograph features a minute counter at 12 o’clock and small seconds at 6 o’clock. The white lacquered dials are juxtaposed not only by the deep metallic blue color but also by the texture of small concentric circles. The blue feuille hands only add to their charm.

Both new pieces contain in-house movements. The new chronograph is powered by the calibre 69355, which the Portugieser collection has been using since 2020. Similarly, the in-house calibre 52000 used in the Automatic has been a staple movement for IWC since its release in 2015. Both movements are beautifully finished and are prominently displayed through the sapphire crystal casebacks on each model.

The Portugieser collection is no stranger to color, with its current offerings featuring dials of blue, green, charcoal and red. But these two new pieces add a little electricity to the classic, almost austere cleanliness the collection is known for. The colored subdials against the white background pop on the wrist for a bit of dimension.

See what we mean by “panda dial”?  IWC

Typified by large, simple, highly legible dials, the Portugieser collection—which dates back to 1939—has been a core pillar of IWC’s offerings for much of the brand’s modern history. With their bright white lacquered dials and rich blue accents, these two newest watches prove that if you can’t teach an old dog (or should we say panda?) new tricks, at the very least you can put him in a new outfit.