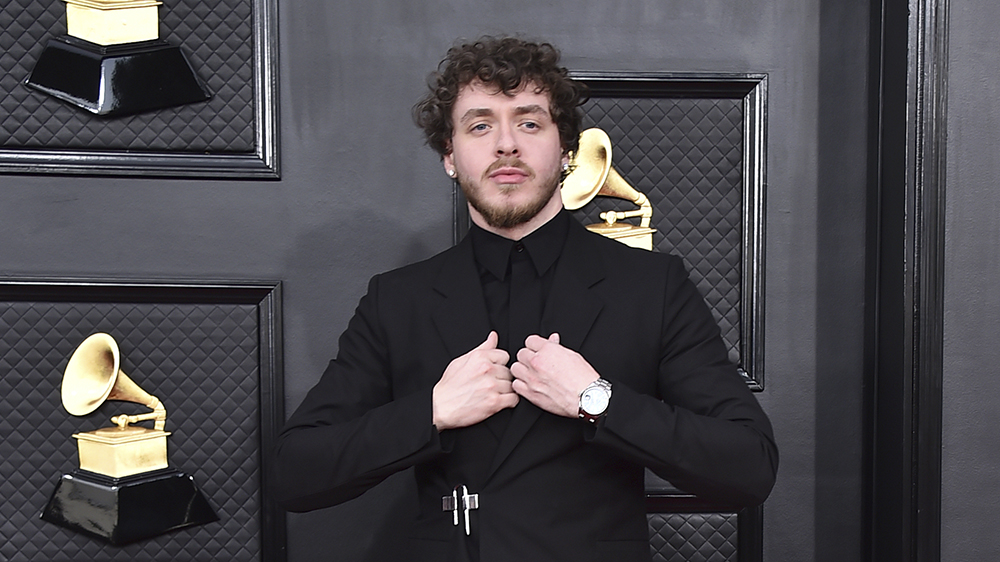 Jack Harlow is loyal especially when it comes to watches.

The “What’s Poppin” rapper showed up for his first Grammys sporting a Rolex Sky-Dweller. If the timepiece looks familiar to fans, there’s a good reason for that; it’s been a fixture in his wardrobe since late 2020.

The Swiss watch could be seen peeking out from under the left sleeve of Harlow’s Givenchy suit all night long, whether he was walking the red carpet or joining Lil Nas X to perform their hit song “Industry Baby.”

It’s easy to see why the rapper, who’s also set to star in the remake of White Men Can’t Jump, is so taken with the timepiece. Harlow’s Sky-Dweller appears to be the Ref. 326934-0003, which features a 42mm case made and bracelet made from Oystersteel, as well as Rolex’s signature fluted bezel in white gold. Underneath its scratch-resistant sapphire crystal with a cyclops lens over the date aperture, you’ll find a bright blue dial with an off-center 24-hour display so that the wearer can easily keep track of the time in another part of the world. It’s powered by the self-winding mechanical calibre 9001 movement, which has a 72-hour power reserve.

Harlow and the $15,200 watch have a relatively long history together. In December 2020, he sat down for an interview with GQ in which he publicly stated his fondness for the watch, which he’d only just acquired.

“I’m not materialistic, but I got this recently and I’m in love with it,” he said in the short clip. “That’s the Sky-Dweller, stainless steel Rolex. I like the color of it. I don’t really like yellow gold, so for me, this can go with so much… I didn’t fantasize about watches growing up, but now that I have one, I really could see myself building a collection. But this is the only watch I have right now.”

Nearly a year-and-a-half later, it’s unclear if Harlow has started building that collection or not. What is clear, though, is that the Sky-Dweller still holds a special place in his heart. Whether he’s at the Met Gala, being interviewed by Rolling Stone or just hanging out with his friends, his trusted Rollie can almost always be seen dangling from his wrist.