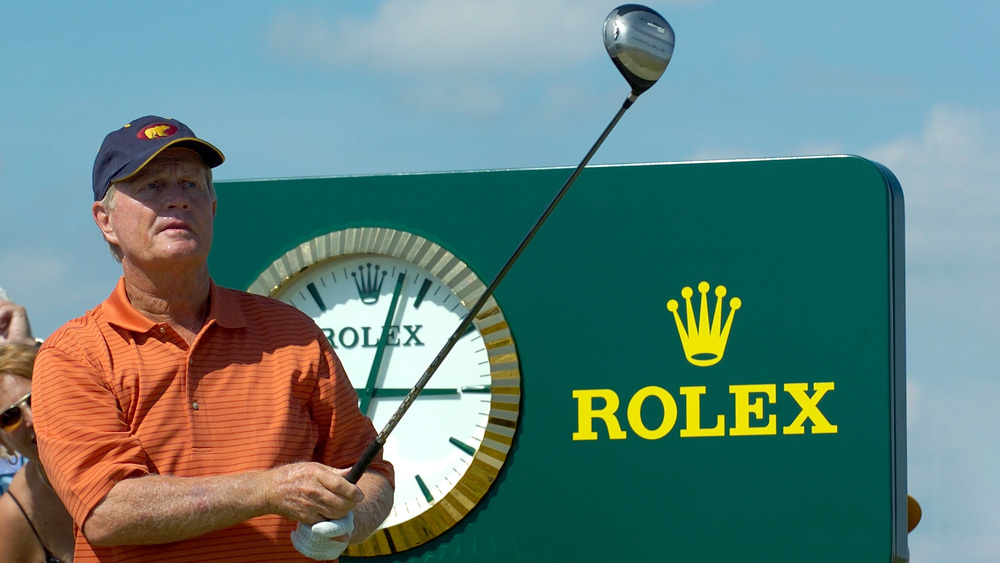 Though not ones to sit on valuable snippets of information, we’re the first to admit that this bit of news has been on our plate for a while now. Earlier this year, during the practice days of the Presidents Cup, Rolex invited us to join the brand at Liberty National Golf Club in New Jersey for a meet and greet with Jack Nicklaus. It so happened that 2017 marked the 50-year anniversary of the brand gifting Jack the gold Rolex Day-Date that has been on his wrist nearly every day—the one that appears in countless photos of Jack before and after every round.

“When I hit the course, the watch would go into a little pouch and then into my golf bag,” states Nicklaus. “When I would finish up on the 18th, I’d put my wallet back into my pocket and my watch back on my wrist. That’s why you see it in every picture of me holding a trophy over the last 50 years!”

While Rolex justifiably takes great pride in its involvement with professional athletes and the sport of golf, that was only part of the story that Jack was looking to tell during our meeting. When asked about his views of other watch brands contending for the spotlight by supporting other athletes, he was not one to mince words. Where Rolex has been in it “for the long haul,” he couldn’t help but wonder if other brands were more interested in riding the coattails of the sport’s current and rising stars rather than providing support to grow the profile of both the individual athletes and the sport itself.

Looping back to the conversation about Jack’s Rolex, this is where things get interesting. As you may recall, the Nicklaus family has long been involved with charity, having founded the Nicklaus Children’s Health Care Foundation down in Florida in 2004. Though not a collector himself (other than “the one” watch, Jack has gifted most of his tournament prize watches to some of his five children and 22 grandchildren), he’s clearly aware of the heat of the vintage-watch market as of late. At the time of publishing, details still remain scarce. However, one thing is clear: Jack is ready to part with his famed Day-Date.

“I can always get another watch,” he says, “Maybe not this one, but I want to raise a million dollars.” That’s right—the current game plan is that Jack Nicklaus’s one-owner, heavily documented, long-cherished 1967 Rolex Day-Date in gold will be heading to auction. For now, details are scarce, but if we were the betting type, Jack’s watch is most likely to end up at Phillips. After the earth-shattering $17.8 million record-setting sale of Paul Newman’s Rolex Daytona, the auction house continues to position itself as the one to beat. Given the pedigree and provenance of the piece, we can’t say that Jack would be ill served in consigning the piece with Christie’s or any of the other auction houses either.

The real question at hand is whether this legend of a watch has the chops to achieve or surpass Jack’s slightly lofty target. Based on recent auction results, there are two key variables at play. Sales of things like the famed Newman, and the Jackie O. Cartier, have made it abundantly clear that a level of fame adds a significant premium that defies prediction. That said, there’s a bit of a difference when you’re talking about a film star versus a beloved first lady versus the best golfer of all time. Jack’s watch will certainly draw a significant and affluent audience, but not necessarily the same audience in the room as the one for the other pieces mentioned.

The other point of consideration is the general market for the Rolex Day-Date as a whole. A big part of Newman’s Daytona selling for as much as it did has to do with how strong the vintage Daytona market as a whole has been in recent years. In the case of the Day-Date, hitting the $1 million mark would break the previous auction record of 473,000CHF by a significant margin, considering your average Day-Date in modest condition regularly trades hands in the low-to-mid five figures.

One thing that will certainly help Jack’s case is the significant charitable connection. Unlike the Newman, where an unnamed portion of proceeds from its sale was destined for charity, the entire proceeds from this sale are (in theory) earmarked for the Nicklaus Children’s Health Care Foundation—a cause that will no doubt tug at the heart and purse strings of prospective bidders in the room.

We can’t help but keep our fingers crossed for Jack as he navigates this potential consignment, and we’ll be watching closely if and when his beloved Rolex finally does hit the auction block.