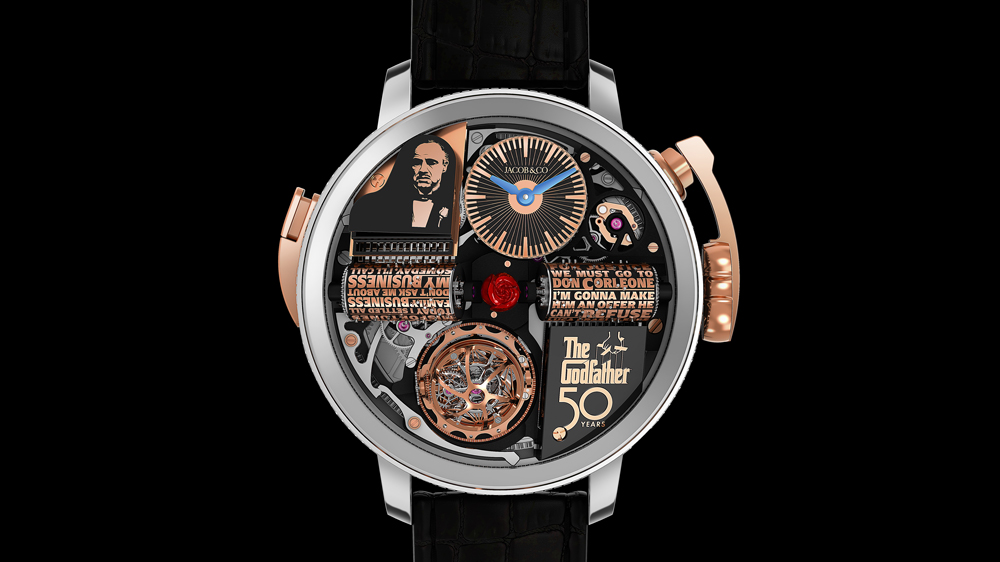 “I believe in America.” It’s the first line in The Godfather, the 1972 classic that exploded the gangster flick genre. The award-winning film (it took two Oscars and five Golden Globes), was the first movie Jacob Arabo of Jacob & Co. saw when he came to America from Uzbekistan. “When I first came to the US from Uzbekistan in 1979, I was 14 years old, didn’t speak the language, and my family didn’t have a penny to its name,” says Arabo. “So, we went to work really hard. It took me two years to earn the time and money to go to the movies. The Godfather was being released again. It was the first movie I saw in a theater.”

Fifty years later, just as there are now three Godfather movies in the archives, Jacob & Co. has introduced a third Godfather watch. It comes loaded with references to the classic mob story. A music wheel plays The Godfather theme music on demand. Two rotating music-box barrels are etched with 13 famous quotes from the movie: “Leave the gun, take the Cannoli”; “I’m gonna make him an offer he can’t refuse”; and “It’s not personal, it’s business,” to name a few. Matching the number of quotes are thirteen still shots from the movie, which are laboriously etched onto the case side in the order in which they appear in the film. A miniature grand piano situated between 10 o’clock and 11 o’clock bears the image of Marlon Brando in character as Don Corleone and there is also a re-creation of the image of the puppeteer’s strings originally featured on Mario Puzo’s novel cover and on the movie poster and at the center of the dial, a sculptured red rose to represents the one worn on Don Corleone’s lapel at his daughter’s wedding. The nods to the film are plenty and certainly not subtle.

But beyond its hat tips to the legendary film, the watch houses a serious movement, the Caliber JCFM04, which contains 634 components and a triple-axis flying tourbillon—its difficulty level required four years of planning. However, Benjamin Arabov, son of Arabo (they spell their names differently) and CEO of Jacob & Co. says the etchings of the film stills was the biggest challenge. “We wanted to create a full cinematic, graphic and musical recollection of Francis Ford Coppola’s cult classic that surpassed every previous iteration,” he says. “In June of 2021, we were on a call with Paramount Pictures, from whom we had acquired the rights to The Godfather, and we started discussing how to rise to the occasion of the movie’s 50th anniversary. One of the things we wanted to do was reproduce scenes from the movie reel, and we decided to do it on the case side.” The images are rendered in 256 shades of gray and black. Jacob & Co worked with DM Surfaces, which created a high-intensity, high-precision Femto laser technology that allowed an unparalleled level of realism and vividness. “We went through countless prototypes, each one slightly different, each one better, more precise. We wanted a true cinematic effect that triggers emotion,” says Arabov.

The watch was unveiled to press and VIP clients of the brand during an event in Sicily over the weekend. Jacob & Co., keen to make a splash for the anniversary year, took guests, including Robb Report, on a tour that retraced the steps of Coppola and his film crew, visiting the locations where the film’s shooting took place in the area surrounding Taormina. It included the church where Michael Corleone and Appolonia were married, the Vitello bar where Michael met Appolonia’s father; the mansion that served as Villa Corleone. Adding to the aura of authenticity was the presence of actor Gianni Russo, who played Carlo Rizzi, in the movie, husband of Don Corleone’s daughter, Connie. The 79-year-old actor was the star of the launch event, gathering an eager audience as he reminisced about the film set, why Marlon Brando nearly got him fired, and how, as a non-actor but as guy who was “connected” he landed a major role in the film.

The author of Hollywood Godfather: My Life in the Movies and the Mob, Russo explained to the crowd how he got the part in the movie. At the time, real-life mafia crime boss Joe Colombo, for whom Russo had worked, formed an organization called The Italian-American Civil Rights League, and started a campaign to stop the film from being made. They felt Italian-Americans would be unfairly depicted and therefore, Colombo demanded the terms “Mafia” and “Cosa Nostra” not be used in the film. The producers agreed to this, as well as an arrangement to hire League members (mobsters) as extras and advisers. One of them was Gianni Russo. It was a decision that did not go over well with the star, Marlon Brando.

“I could see Brando rolling his eyes, and he calls Coppola over and says, ‘This is an important character; he marries my daughter, undermines the family, yet he’s not an actor… you gotta rethink this,’” Russo told Robb Report during a cocktail hour before a seated dinner in Sicily. “He’s trying to get me fired. I would never have been able to go back to the neighborhood. So I put my arm on him, and I walk him to the back of the room, and I say, ‘Let me tell you something Mr. Brando, I respect your work, but if you screw this up, I will suck on your heart, and you will bleed out here today.’ He stepped back, and said, ‘That was brilliant.’ He thought I was acting.” Needless to say, he remained in his role.

Only 50 real-life maestros will get their hands on Jacob & Co.’s 18-karat white gold Opera Godfather 50th Anniversary watch. And at 49 mm x 21 mm thick with a price tag of $500,000, it’s certainly not for the discreet. And for those that want to get fully into character and show their friends “who’s boss,” the watch also comes with a Godfather-themed fountain pen and a whiskey decanter.