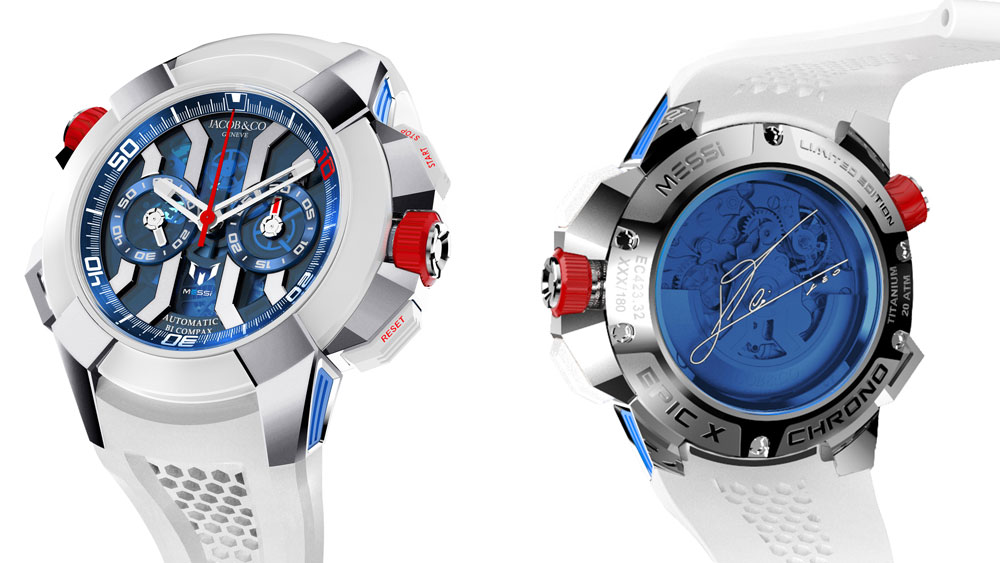 Best known for pushing the boundaries of traditional watchmaking with highly complicated timepieces that showcase the art of diamond-setting, Jacob & Co. may not immediately come to mind as a maker of sport watches.

But expect that reputation to change this month with the introduction of the Epic X Chrono “Messi” watch, the first of several limited-edition timepieces produced in collaboration with Leo Messi, an Argentinian soccer legend considered by many to be the game’s greatest player. (A forward for FC Barcelona, Messi is a nine-time champion of the Spanish soccer league, four-time winner of the European Champions’ League, five-time winner of the Ballon d’Or as the best player in the world, five-time winner of the Golden Boot as the top goal scorer in Europe, and an Olympic gold medalist, just to name a few of his accomplishments in the sport.)

Housed in a 47 mm titanium case with a white ceramic bezel, white ceramic pushers, blue rubber horns and red rubber crowns, the column wheel chronograph—whose color scheme serves as an ode to the light-blue-and-white flag of Argentina—features a number of details personalized by Messi. Those details include his iconic no. 10 in red on the flange ring; his logo, a stylized M, on the dial at six o’clock; and his signature on the blue sapphire glass at the back of the case.

“The Epic X Chrono ‘Messi’ is recognizable anywhere,” said Jacob & Co. founder Jacob Arabo. “And for us, it was the perfect way to begin a partnership with Messi and a true association of champions. The beauty of this finished product and our overall experience with the Messi brand thus far have also significantly raised our expectations for future releases.”

Jacob’s exclusive three-year timepiece partnership with Messi will continue with the SF24 Tourbillon, due out later this year. Two additional timepieces will follow.