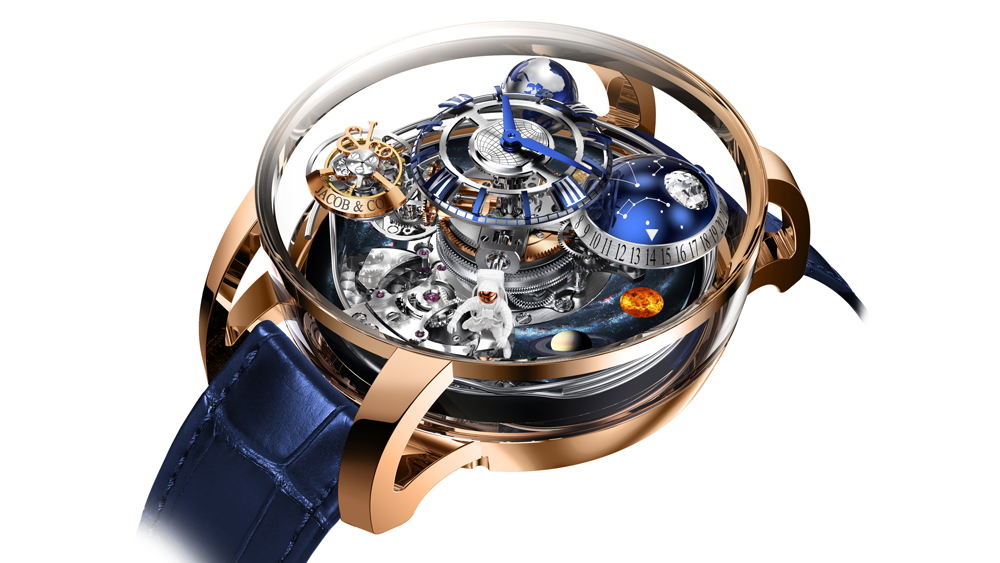 Because the minute repeater ranks high among watchmaking’s elite complications, it’s generally represented in a suitably reverent, traditional format, with minimal decoration beyond conventional finishes. Jacob & Co., always the extrovert among the few makers of repeaters, takes the opposite approach. Its latest Astronomia watches come equipped with gongs and hammers on full display, along with a triple axis tourbillon, a half-sphere constellation globe with two spherical half-carat diamonds, a full-sphere lacquered globe and a tiny astronaut orbiting over the dial plate, locked in a 40-second rotation. The busy 3D composition is arranged on layers within a curio-cabinet sized case, 50 mm-wide x 26 mm-thick, against a backdrop of stacked gears and a ring of aventurine, hand-painted with stars, planets and the Milky Way, all of which are visible from three angles inside a domed sapphire crystal case.

Jacob & Co.’s triple-axis tourbillon Astronomia watches, were first introduced in 2014. Other pieces in the collection include an Astronomia Spider, Astronomia Casino, Astronomia Gambler, Astronomia Octopus and several Astronomia Solar watches with spherical faceted gems representing planets. This is the first minute repeater in the collection, and in typical Jacob & Co. style, it is the blockbuster of its genre: a Carillon repeater with three gongs and hammers rather than the conventional two. The gongs are stacked on top of each other vertically, rather than positioned adjacent to each other inside the case periphery, which makes them more clearly visible through the sapphire case sides. The carillon chime strikes hours and 15-minute intervals as well as minutes, using the music notes Do, Re and Mi. A safety feature prevents winding the watch while it is chiming, protecting the movement from damage.

The movement is the manual wound JCFM06, made of titanium and maillechort. The latter is also known as German silver, an alloy of nickel, copper and zinc, that is used as an alternative to brass in movements for aesthetic reasons: it looks like silver. The movement was three years in development and includes a triple axis tourbillon, with the first cage rotating every 60 seconds and the second every 90 seconds. Both rotate around the central axis every 10 minutes. The watch will be made in a limited series of 18 numbered pieces, priced at $780,000.

Jacob & Co., which is primarily a jeweler, also introduced a new jewelry version of the Astronomia at Baselworld. The base plate of the 3-D Astronomia is invisibly set with baguette diamonds and blue sapphires in both dark and light icy hues, forming a mosaic composition reminiscent of a Saturday Night Fever dance floor. Four arms radiating from the central axis of the dial each carry an element around the periphery every 10 minutes. They include an hour and minute dial, a lacquered spherical globe, a triple-axis tourbillon escapement and a one-carat spherical diamond with a 288-facet, proprietary Jacob Cut. The diamond, globe, time dial and escapement each rotate on their axes once every 30 seconds; a differential gear ensures the time display always sits in the right position, with 12 o’clock at the top. Tapered baguette diamonds are also set into the long lugs, for a total gem weight of 15.44 carats. As you might imagine, this even more opulent version of the Astronomia is a one-of-a-kind piece at $1.2 million.