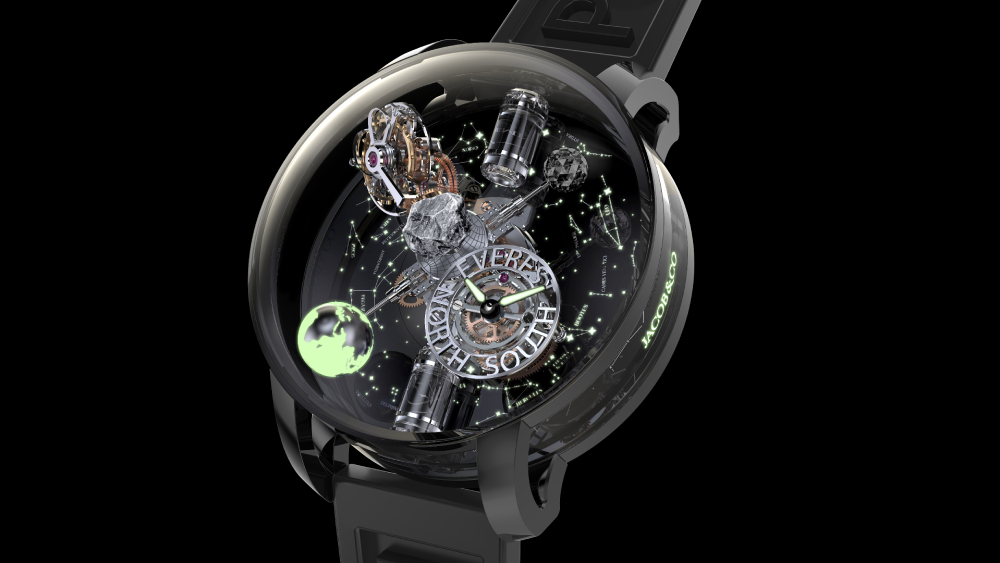 We wouldn’t blame you for looking at a highly complicated watch and assuming it’s a beautiful but inherently delicate object. Jacob & Co.’s latest mountain-ready release is on a mission to prove that assumption wrong––and help preserve some of the planet’s most fragile natural expanses at the same time.

Swedish explorer and adventure activist Johan Ernst Nilson recently climbed the Himalayas with Jacob & Co.’s Astronomia strapped around his wrist. Despite altitudes of 20,000 ft, temperatures as frigid as -22 degrees Fahrenheit and impacts made while scaling walls of ice, the Astronomia performed perfectly. Inspired by its rugged nature and the need to address the impacts of climate change he’s witnessed while traveling to 172 countries, Nilson is partnering with the Swiss watchmaker on a new version of the house classic––the Astronomia Everest.

“Raising awareness about the dangers facing our planet is important,” said Jacob Arabo, founder of Jacob & Co., in a statement. “Working with well-known adventure activist Johan Ernst is a great way for our brand to get involved, and the new limited edition of the Astronomia Everest is really special.”

Nilson wearing the Astronomia Everest with the Himalayas in the background.  Jacob & Co.

Based on the Astronomia Sky, the Astronomia Tourbillon Everest features Jacob & Co.’s signature double-axis gravitational tourbillon on one of four satellites. To underscore its connection to the Earth and its namesake peak, the face is constructed with minuscule transparent buckets of actual water Nilson collected at both the North and South Poles. Mounted in the center of the timepiece is an actual piece of rock from Everest itself, another contribution culled during Nilson’s travels. This is the very first Astronomia with Super-LumiNova on the hands, the base dial, the turning globe, the logo and even on the strap—so it’s legible even when lighting conditions are poor.

Keeping with the theme, even its presentation box is shaped like Mount Everest complete with a line detailing a climber’s ascent. Open it and you’ll find the timepiece embedded in what appears to be ice and a mini speaker will play the recorded sound of wind whipping across the infamous mountaintop. Limited to 24 pieces to match the 24 time zones of the Earth––12 pieces with a black Celestial Vault and 12 pieces with a blue Celestial Vault––10 percent of the purchase price will be donated to an environmental charity. To top it all off, each sale includes an expedition with Nilson, by helicopter, to the place on Mount Everest where the rock included in each watch was found.

Nilson explained, “The Astronomia is the only watch I’ve ever had people ask me about while I am wearing it, so we will be starting conversations that hopefully will lead to change. This special edition will spread the word about the fragility of our planet.” The Jacob & Co. Astronomia Everest package is available for $884,800.