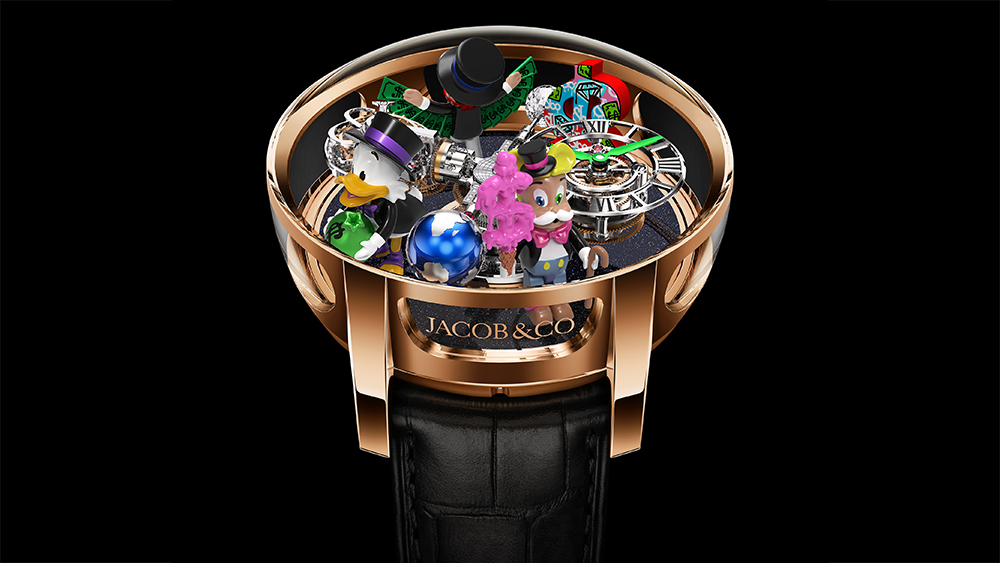 Jacob & Co. isn’t exactly known for subtlety. So it’s no surprise that its latest high-end watch, a subversive nod to one of the most popular board games in history, brings lots of color and movement to the wrist.

This week, the New York-based jeweler released a collaborative timepiece with renowned graffiti artist Alec Monopoly, known for his graphic sendups of the board game in his nom de plume. The exuberantly animated watch, called the Astronomia Alec Monopoly, features brightly renditions of the game’s central character, Mr. Monopoly, manifested as other pop culture icons and set off against a black dial decorated to look like a starry night sky. The watch is housed in an 18-karat gold case with a curved sapphire crystal dome and four windows on its side—allowing for a full view of the artistry inside.

The watch, like other pieces in the Astronomia line, features a four-arm vertical movement powered in part by a tourbillon complication. On one arm you’ll find a hand-lacquered magnesium globe that rotates every 60 seconds; opposite this, there’s a 1-carat diamond in the jeweler’s exclusive spherical Jacob cut that spins at the same velocity. The double-axis tourbillon stands opposite the time display. Underneath it all, the watch is powered by the jeweler’s manual winding JCAM10, which boasts a 60-hour power reserve.

The artist drew each of the four characters housed inside the watch, which later became CAD renderings that were tailored to fit within the watch’s case without disrupting its Astronomia movement and complications. The characters were then hand-sculpted, cast in gold and hand-finished.

“I love the juxtaposition of my youthful cartoon characters, brought to life with bright and vivid colors in a timeless watch with stunning complications,” the artist shared in a statement.

“I have been developing the characters I integrated into the watch for years now,” he said. “You can see variations of reinterpretations of them in my paintings and sculptures.  It’s so exciting to see them come to life on such a small but significant scale.”

The price is significant, too. Interested parties who can spare the $600,000 asking price can find more information about the watch on the jeweler’s website.