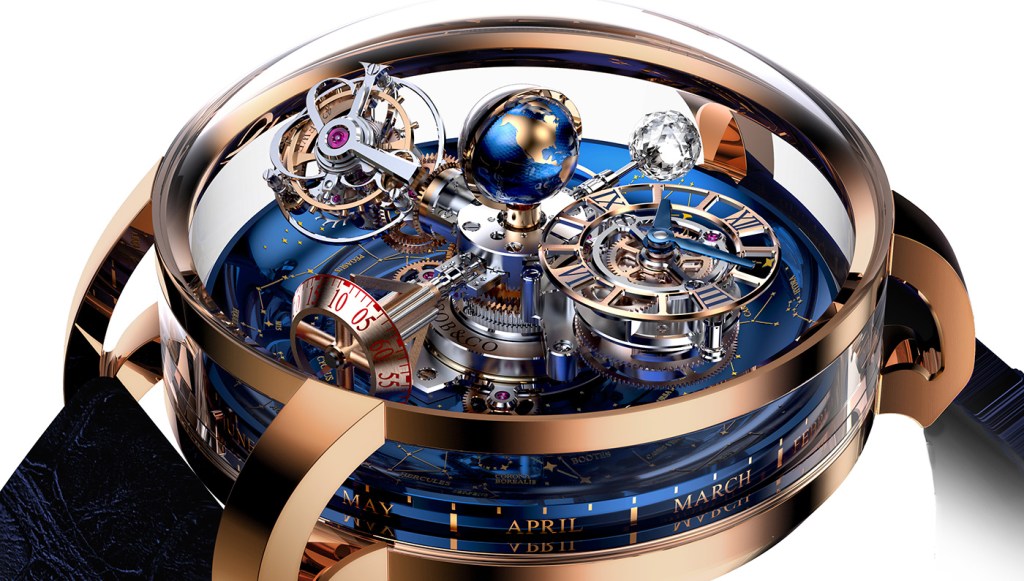 The Astronomia Sky builds on its predecessor’s daring nature.

Truly appreciating the latest timepiece from Jacob & Co. (212.719.5887, jacobandco.com) starts with understanding its antecedent. “After the first version [Astronomia], we really wanted to connect the watch with the stars,” explains Luca Soprana, the watch-development specialist behind the creation that Jacob & Co. unveiled in 2014. That extravagantly complicated timepiece features a time display and a tourbillon, as well as representations of the Earth and moon that rotate on spokes around a central axis—all visible beneath an expansive sapphire dome. The watch bucked a trend toward conservatism in new timepieces, and while it drew admirers within the Swiss watchmaking establishment, it also encountered some skeptics.

Jacob & Co. has silenced much of the criticism with its new Astronomia Sky (about $690,000). It incorporates a sidereal-time display that tracks the movement of the stars with zodiac indications. No feature brings as much gravitas as the sidereal-time complication, which historically has been attempted on only the most complex and prestigious watches. “The reference in these displays is the flat sky charts done by Patek Philippe and Vacheron Constantin,” says Soprana. “Jacob’s idea,” he adds—referring to Jacob & Co. founder and chairman Jacob Arabo—“was really to create a sort of planetarium with all the stars and planets going around.”

The Astronomia Sky’s star chart lies under an inverted dome over the movement, with a moving oval indicating the stars above the Geneva latitude. The dome rotates imperceptibly, about 1 degree per day to account for the orbit of the Earth around the sun that differentiates a sidereal day (23 hours, 56 minutes, 4.1 seconds) from a solar day. Soprana had to create special planetary gearing to accurately render the massive speed reduction, but it was Arabo’s approach to watchmaking, Soprana says, that allowed him to create a starry dome that reminds him of works by the painter Giotto. “The best thing about working with Jacob,” he says, “is that he is not a watchmaker at all. He is concerned with the aesthetical quality of the piece and asks for things technical people would never request. He asks for a totally different approach, and for me, it’s very interesting to work this way.”