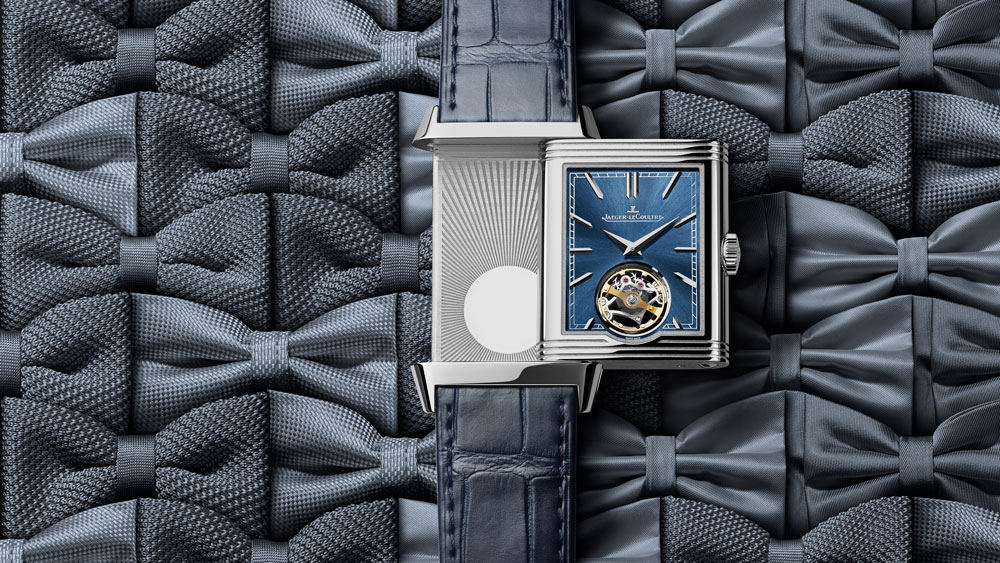 This year marks Jaeger-LeCoultre’s 185th year of watchmaking. There’s no classic anniversary gift for 185 years – silver, gold, and even diamond don’t quite cut it – so to celebrate the milestone, the Swiss watchmaker has turned to its most iconic model, the Reverso Tribute. This time around, Jaeger-LeCoultre added a tourbillon to its flip-face timepiece and equipped it with a new manually wound caliber. The Reverso Tribute Tourbillon Duoface ($123,000) is limited to just 50 pieces and features a new design that slims down the timepiece into a 9.15 mm platinum case, setting it apart from the watchmaker’s Tribute Gyrotourbillon timepiece. It’s not just slimmer, but smaller in case size as well. It comes in at a mere 27.5 mm wide and 45.5 mm lug to lug, which makes this new timepiece smaller in every way.

Pared down elegance is key in this new timepiece, which features a less ornate dial on the front side, a blue sunrayed dial with silvered, hand-applied hour-markers and Dauphine-style hands with the flying tourbillon at 6 o’clock. Flip it over for a grained dial with a more decorative Côtes de Genève finish with a second time zone, small seconds, and a day/night indicator display. The flying tourbillon is visible on both dials.

Since its inception in 1931, the Reverso has always maintained the stylistic aesthetic of the Art Deco period, and it continues to be the brand’s most recognizable model 87 years later. The ingenious flip-face design was originally born from a polo match in India, when Swiss businessman César de Trey took note of a player’s broken wristwatch post-game and challenged watchmaker Jacques-David LeCoultre to come up with a watch that could withstand the rigors of the sport. It’s been a hit ever since. And while it has its roots in sports, the watch has become known as a classic dress watch today.

Offering a flying tourbillon in the Duoface concept for the first time will, no doubt, be appealing to collectors and its slimmer, smaller case is in keeping with current trends towards less in-your-face watches that overpower the wrist. And at just 50 pieces worldwide, this handsome new Revero Tribute will likely only be available to those who already have a healthy collection of Jaeger-LeCoultres.