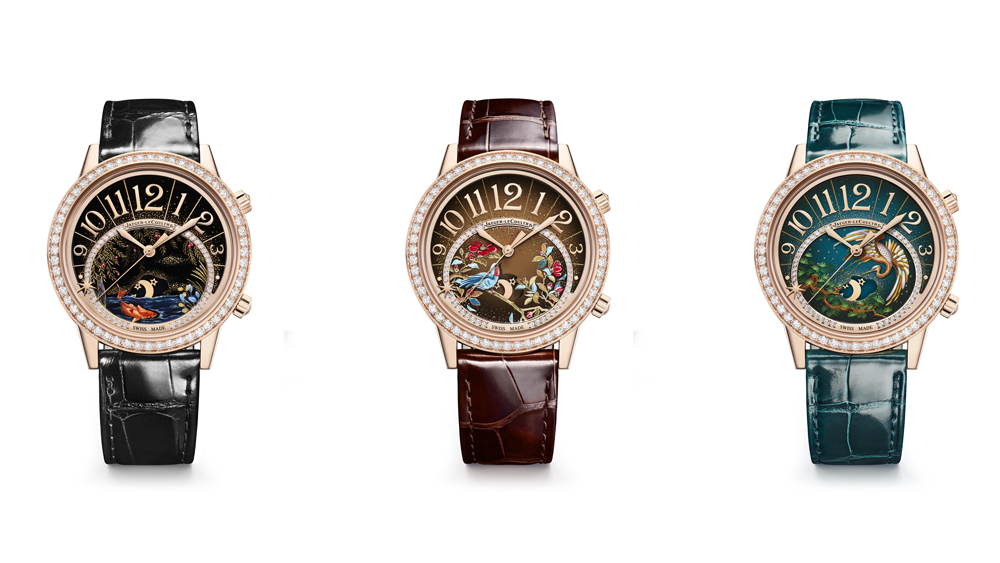 Who doesn’t want a little peace this holiday season? Jaeger-LeCoultre is bringing a touch of serenity to its latest trio of Rendez-Vous timepieces, which depict scenes of nature in Japanese style through Métiers d’Arts techniques. The intricate visuals include swimming koi fish, a hovering crane and a kingfisher bird perched on a flowering red Quince tree.

The timepieces showcase three artisanal areas of JLC’s expertise: lacquer work, miniature painting and gem setting. The highlight is the Koi edition, whose black dial features the bright orange Japanese fish taking a dip into the blue rippling water of a pond just beneath a weeping willow tree. Peeping through the sky in the center of the scene is the day/night indication. The Koi fish is said to symbolize “strength of purpose, courage and perseverance in the face of adversity, bringing the rewards of success, abundance and good fortune” according to the company.

The Crane and Kingfisher models, however, are just as intricately executed. The tsuru (Japanese for Crane)—said to embody happiness, a soaring spirit and longevity because in Japanese culture it was thought to live for 1,000 years—is crafted from a deep blue-green lacquer that is patiently applied layer by layer to achieve the gradient color. The tiny gold dots seen on all three timepieces are hand-applied to imitate maki-e lacquer, a technique from the Japanese Edo period of sprinkling fragments of gold leaf onto wet lacquer for a gradient effect. The confetti-like formation of the minute dots is so perfect it’s hard to imagine that such steady hands could exist within Jaeger-LeCoultre’s manufacture, making the case for the high-level skill of its craftspeople.

The detailed images are created using tiny microscopic brushstrokes, a process that takes 35 to 40 hours of high-pressure, high-focus work. The Kingfisher, for example, is perched on handpainted branches of the red-blossomed Quince tree, a symbol of both longevity and renewal. The bird itself is culturally representative of beauty, virtue, fidelity and a happy marriage…in case you’re trying to drive a message home this holiday season. But whether you’re buying into the symbolism or not, there’s no doubt that anyone opening up a box to discover one of these beauties this holiday season will be thoroughly wowed.

The time display of each watch is consistent across all three pieces with oversized Arabic numerals encircling the dial in a half-moon shape before disappearing beneath each artistic scene. All three watches are housed in sizeable 38.2 mm by 10.59 mm 18-karat pink gold cases. (That may be large for more diminutive wrists but it’s also a necessity to allow space for the scene executed by Jaeger-LeCoultre’s artists.) Inside each piece is the self-winding Caliber 735 movement, which also requires extra room as it powers a chiming complication and day/night indicator developed specifically for the Sonatina.

Rare handcraft pieces such as these aren’t for everyone, both because of their prohibitive price and also their very specific look, but Jaeger-LeCoultre managed to pull off tiny art tableaus for the wrist which look just right from day to night. And you will need plenty of good fortune to get your hands on one, just 10 examples of each piece will be made worldwide and, as you can imagine, the price is upon request.