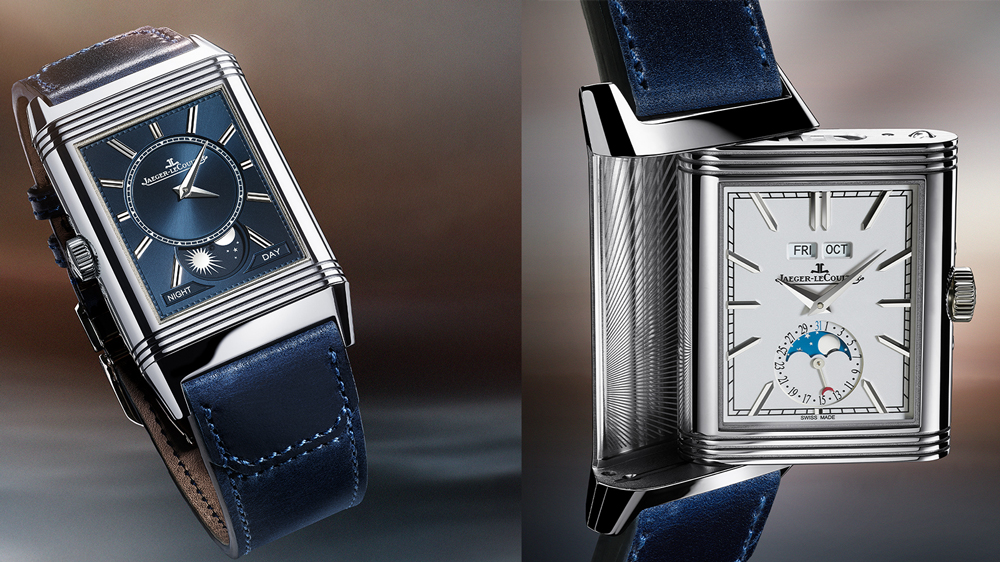 Jaeger-LeCoultre’s Reverso was a sensation when it was introduced in 1931, and it’s still going strong today, with the company announcing a new model, the Duo Reverso Tribute Duoface Calendar, and a new campaign starring actors Nicholas Hoult and Anya Taylor-Joy wearing other Reverso models. The ingenious case, which flips over and clicks into place with the caseback facing outwards, is one of the most recognizable designs in watchmaking. It was originally created to protect the dial from the rigors of the polo mallet for British colonial officers stationed in India, but as seen in the new Duoface Calendar pieces just released, the design has allowed for two dials in one watch (and in the case of the Hybris Mechanica Reverso, a Robb Report “Best of the Best” winner in 2021, it provided four dials in one). It has expanded to include all manner of métiers and complications.

The flippable case now showcases two different dials, and usually two different time zones. On one side of the new Duo Reverso Tribute Duoface Calendar is a simple calendar with day, date, month and moon phase and on the other, a second time zone with a day/night indicator. The simple calendar, also called a triple calendar, displays day, date and month, and usually the moon phase (as seen here), but unlike annual or perpetual calendars, it requires a date adjustment for every month with less than 31 days.

There are two versions: one in steel, priced at $14,500, with a silver-grained dial on the calendar side and a blue sunray finish on the reverse side featuring the second time. The other is 18-karat red gold, priced at $26,700, with a silver sunray dial on the calendar side and a gray sunray dial on the other. The watches are finished to perfection, with Clous de Paris guilloché on the outer dial segments, gadroons grooved into the upper and lower case and a pattern repeated in the grooves on the carriage that holds the case. The dauphine hands and applied markers are faithful to the Reverso design codes.

The launch coincides with Jaeger-LeCoultre’s unveiling of a new campaign starring actress Anya Taylor-Joy (The Queen’s Gambit) and actor Nicholas Hoult (The Favourite). An accompanying film, A New Turn, celebrates the Reverso and the so-called butterfly effect, which holds that the tiniest incident in nature can create an unstoppable chain reaction leading to an unimagined event: a drop becomes an ocean, a simple smile becomes an enduring romance, a brush-stroke becomes a masterpiece.

The metaphor extends to the Reverso itself, with the narrative highlighting how a margin of mere millimeters is essential to the watch’s accuracy. In the film, Taylor-Joy wears the Reverso Duetto Small in pink gold, with a classic side and a more flamboyant face with diamond-set gadroons. Holt wears the Reverso Tribute Calendar in pink gold, with a classic Art Deco-style silver sunray-brushed dial on one side and a newly refined reverse-side dial with a redesigned night and day indicator.