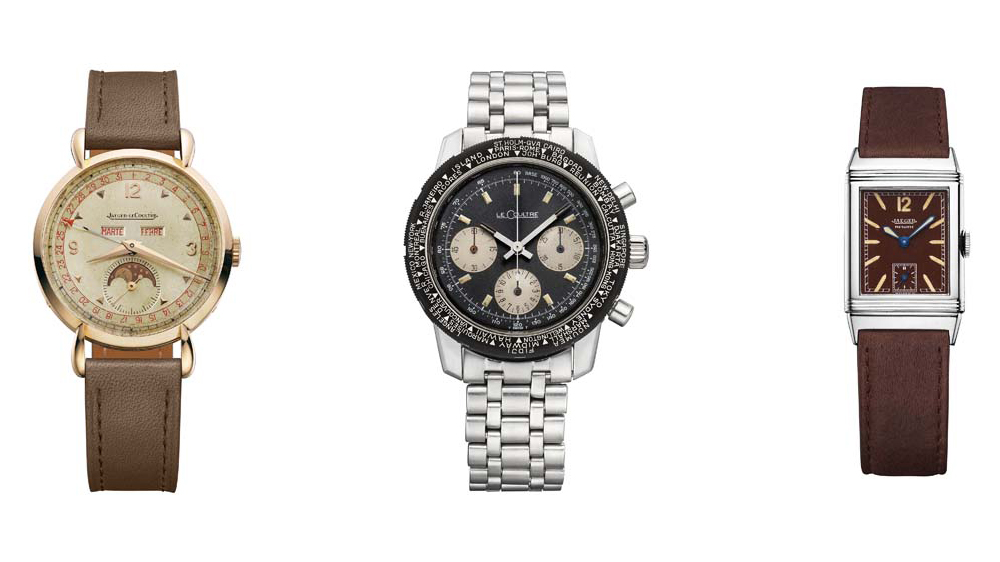 Nestled in amid the picturesque snowy hilltops of La Vallée du Joux in the small watchmaking village of Le Sentier in the Swiss Alps lies Jaeger-LeCoultre’s sprawling 270,000-square-foot manufacture where 1,000 employees turn out the company’s greatest hits such as the Reverso, the Memovox and the Atmos, to name a few. But just 10 watchmakers lead the company’s restoration efforts and they are considered the best in their class, requiring two more years of training than their colleagues working on new product. While always essential to the business to restore historical pieces from clients, they are now part of a growing effort from JLC to offer rare vintage timepieces sourced by the company to its top collectors.

Dubbed “The Collectibles,” the line will be a continually evolving offering of ultra-exclusive vintage pieces tightly curated by Matthieu Sauret, JLC’s product and heritage director. A selection of timepieces will be available to purchase through The Collectibles on jaeger-lecoultre.com and in the form of capsule collections that will travel around the world. The idea has been in planning for the last two years. “I remember running into Catherine [Rénier, CEO of Jaeger-LeCoultre] in the corridor and she said, ‘I think we should work on selling vintage watches,'” says Sauret told Robb Report. “And from there we had to create a frame around it, because we needed to carefully select which models were going to be put on sale. We said, ‘How about we create the categories and we find maybe the rarest one among the models?’

Each piece has been carefully restored using new old stock (and, when necessary new parts made exactly as they were in the era in which they were created using original machinery) as they were made during their time. Great care was also taken to avoid polishing the dials—an important nuance for top collectors. Even the hands are blued using a copper tray of filings over a flame, as it would have been done in the pre-Quartz Era. The restoration masters work in a loft-like area of the manufacture near the archives (where a blueprint of every watch the company has ever made can be found) on wooden watchmaker’s desk that look lifted from another era compared to the stark modern workspaces surrounded by CNC machines and other essential production equipment for the 21st century. Here, they work with their hands, traditional antique tools and parts and other equipment dating back as far as the ’20s and stamping machines made in-house since the ’50s. The entire process is executed in-house.

The watches will, of course, be accompanied with a report detailing every single step of their restoration. A coffee-table book, The Collectibles, was also created as the result of Suaret and his team’s meticulous planning of the new venture. “We started making these collector’s guides, which first started as a document between us,” says Suaret. “It turned out to be 557 pages since we started the chapters.” This massive tome is a must-have for collectors whether they get their hands on a piece from The Collectibles or not. Consider it an encyclopedia of what you should be considering if on the hunt for a vintage JLC piece.

And if you are not already at the top of JLC’s client list, chances are you won’t get your hands on anything from the new selection of vintage timepieces. Half of them have sold already. “We showed them to about 10 of our best clients and six of them sold,” says Suaret. “We only allow them to buy one each but some clients wanted to buy the entire set.” Today, another round of collectors were scheduled to be shown the remaining pieces. Highlights from the remaining pieces still available for sale (as of yesterday when they were shown to press at the manufacture in Switzerland) include a Memovox Automatic Calendar E 855 with a striking Lapis Lazuli dial ($30,400), produced exclusively in steel and in a very limited run, from 1969 and an ultra-crisp Geophysic ($60,000), produced as a deluxe version made exclusively in 18-karat gold for just 103 pieces, from 1958.

And if you happen to have something special laying around in the vault, Suaret says there are few things at the top of his list he is currently hunting. “One piece that has been on my mind a lot is the Futurematic with the two apertures, which is very hard to find,” he says. “We do have some of them.” He is also looking for a tonneau-shaped, chronometer-certified Geomatic from the ’60s in 18-karat yellow gold. “It’s in a very different shape than the rest of the Geomatic collection, which is round,” he says. “Two collectors I know have bought some and they keep teasing me with them and showing me pictures. Competition makes for a good treasure hunt.” But his current grails are a few Reversos with Indian enameling on their flip caseback. “There is a legend that the Maharaja of Karputala made a request for several watches with enameling of his wife,” says Suaret. “That is what triggered us to do enameling on the back. It’s a story that has been told to us by people who were there creating them at the time, or their sons and daughters, but they are very hard to find. No one has seen them since. If I find them, it will be the highlight of my career.”