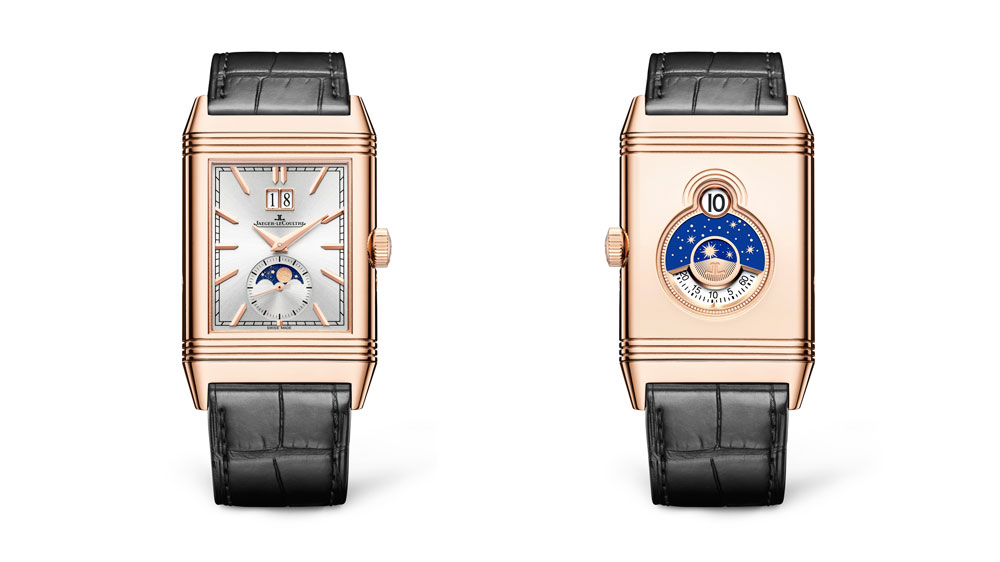 You may have heard that Jaeger-LeCoultre’s most recognizable model, the Reverso, is celebrating its 90th anniversary. At the Geneva Watches and Wonders digital show last week, the company took the famed flip-face watch to new heights by introducing a version with not one, not two, but four faces. Now, it has come out with yet another impressive edition, the Reverso Tribute Nonantième (meaning 90th in Swiss-French).

Set in 18-karat pink gold framing a silvered and sunray-brushed dial, the 49.4 mm by 29.9 mm watch has a thickness of 11.72 mm. It comes with a moon phase display at 6 o’clock set within the small seconds counter and a date window at 12 o’clock. It’s as classic and elegant as any traditional version of this model, but a turn of the dial reveals an entirely new expression. Two round apertures arranged like a figure-8 house a semi-jumping digital hour at 12 o’clock, a first for the Reverso, and a larger circle beneath which shows the hours and minutes on a semi-circle opening, revealing numerals on a rotating disc that have been obscured by a blue-lacquered, three-quarter plate adorned with golden stars to depict the night sky. Within the blue frame is a smaller circle with an applied golden sun and moon for a day/night indication.

The jumping-hour display is, without a doubt, the face you will want to most frequently show off should you be one of the lucky few to get your hands on the limited edition. Although this kind of indication has been around since the mid-1800s—when IWC first made it a commercially viable option in its Pallweber pocket watches—and had a surge in popularity during the Art Deco period in the ’20s (not long before the birth of the Reverso in 1931), it has recently found its way back into the spotlight. Vintage models are becoming increasingly sought after from makers such as Patek Philippe, Cartier, Rolex and Audemars Piguet, and even Gucci has recently sought to recreate the look in its über-popular and accessible Grip watches (which they have recently elevated with mechanical movements, gems and stone dials). Surprisingly, it’s the first time the function has been featured on a Reverso, thereby making it all the more collectible.

Housing a new manually wound Caliber 826, the Nonantième is constructed with 230 components and has 42 hours of power reserve. It’s limited to 190 pieces at $41,600 and will only be available at Jaeger-LeCoultre boutiques.