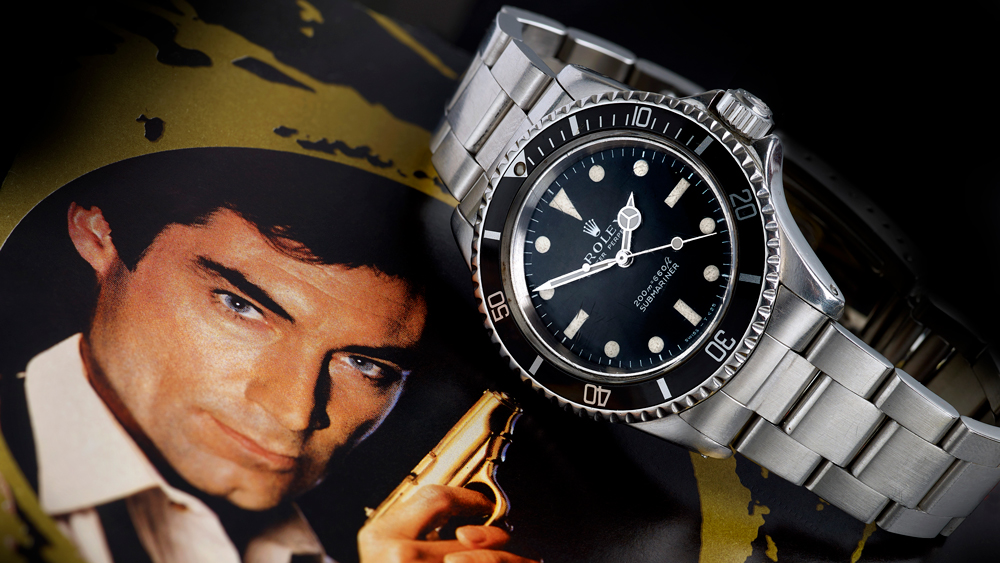 In a year of big Rolex Submariner news, now we have another Rolex Submariner, once worn on the wrist of a Hollywood stuntman, up for auction. On the heels of Phillips’s announcement that it would no longer be auctioning off Steve McQueen’s Submariner (that he supposedly gifted to his stuntman Loren Janes), Fellows has announced it has a James Bond Rolex Submariner ref. 5513 on its hands.

Before modern-day Bond became an Omega fan, he was a loyal devotee to Rolex from the time Sean Connery first cemented the relationship between the watchmaker and 007 in 1962’s Dr. No. Fellows ref. 5513 made its big-screen debut in 1989’s Licence to Kill. The watch was worn on Timothy Dalton’s stunt double, Rodney Pincott, in the film and will go on the block Tuesday, October 30. Fellows has set the estimate at £60,000–£90,000 (or approximately $79,000–$118,600 at current exchange).

In the film, the Rolex can be seen on Bond’s wrist in a scene where he’s behind the wheel of a tanker truck during a car chase in Mexico. The watch didn’t come out totally unscathed—it was damaged during the stunt scene—but paperwork provided with the watch affirms it was restored by Rolex . . . free of charge, of course. In addition to the paperwork, the watch will also come with a book on the making of the movie, a soundtrack album, and a certificate of authenticity from the film company, EON Productions.

Coincidentally, the year that Licence to Kill debuted was the last year the Rolex ref. 5513 was in production. The model had one of the longest manufacturing runs of any Rolex ever produced, having been manufactured from 1962 (the year Connery wore Rolex in the first-ever James Bond film) to 1989.

In 2015, Phillips sold a Rolex Submariner ref. 5513 worn by Roger Moore in the 1973 thriller Live and Let Die for $365,000, and while the Fellows Submariner wasn’t worn by Licence to Kill’s leading man, given the current Rolex market at auction, it will likely fetch well above its estimate.