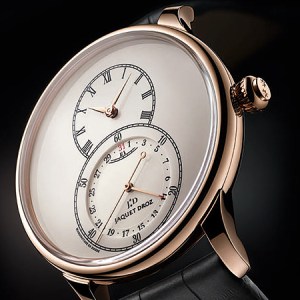 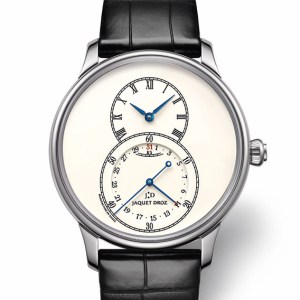 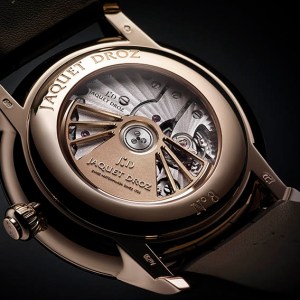 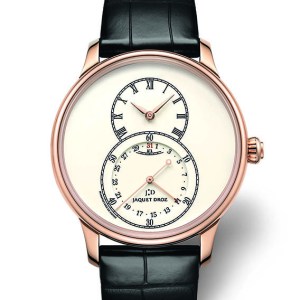 The most recent addition to Jaquet Droz’s Grande Seconde collection, the Grande Seconde Quantième Ivory Enamel, updates the 12-year-old line both mechanically and visually. From a technical standpoint, the watch’s most significant feature is a completely new movement that employs a silicon balance spring to regulate its timekeeping mechanism. (The movement was developed by Jaquet Droz and assembled by Blancpain.) The use of silicon improves the new watch’s precision, as silicon is less sensitive to error-inducing forces such as shock, friction, and temperature change. Through the watch’s back crystal, the balance wheel can be seen pulsing away beneath the movement’s Côtes de Genève–finished bridges.

The new timepiece is also a stylistic evolution for the watches of the Grande Seconde collection, which all feature a dial design marked by the distinctive figure eight created by the intersection of two subdials. The Quantième Ivory Enamel retains this shape, but its lower subdial is recessed, lending the piece a sense of depth. Both sections of the dial are created using the grand feu method of enameling, which allows all of their lines, indexes, and other decorative elements to be baked in during the enameling process rather than painted on later. The Grande Seconde Quantième Ivory Enamel is available in either red or white gold in two case sizes—39 mm ($19,400) or 43 mm ($20,000)—ensuring there is a version perfect for any wrist. (www.jaquet-droz.com)